The NFL, its teams, broadcasters and fans all have learned one thing in 2020: Nothing is certain with the schedule.

Never was that more obvious than in the last two weeks, with the kind of scrambling that made Fran Tarkenton famous affecting a bunch of games. It's not likely to end as COVID-19 surges in America.

So there's no guarantee when the following matchups will occur — or, in the most pessimistic view, IF they will happen. And yes, while the league wants to avoid extending the regular season to a Week 18 in January, it is even more adamant about no cancellations or forfeits. Just ask the Broncos and Ravens. 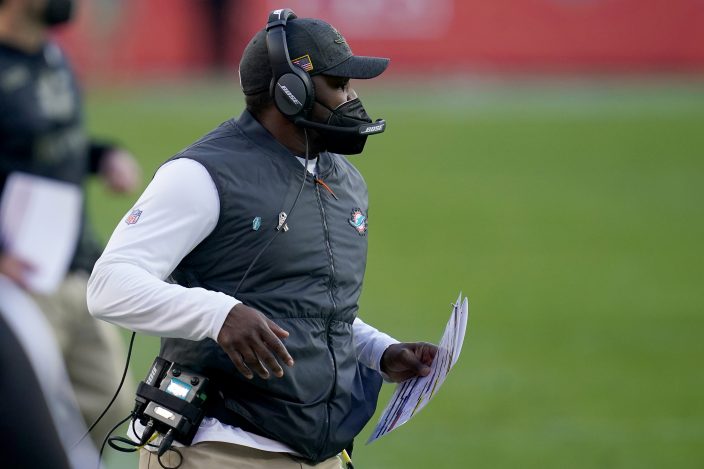 Miami Dolphins head coach Brian Flores during the second half of an NFL football game against the Denver Broncos, Sunday, Nov. 22, 2020, in Denver. (AP PhotoDavid Zalubowski)

But these are some of the intriguing games remaining, and why:

Pittsburgh at Buffalo — Possibly the best chance to derail the Steelers' undefeated season, and unquestionably a major stepping stone for the Bills.

Baltimore at Cleveland — The Ravens have had a difficult season and the Browns have had a turnaround year. This meeting could determine how the rest of 2020 goes for them.

Kansas City at Miami — Don't think this will be a walkover for the Chiefs, who probably need every victory to have a shot at the AFC's only playoff bye. Miami's defense can be formidable, particularly the improving secondary.

Indianapolis at Las Vegas — One of these clubs could be looking from the outside of the postseason with a loss here.

Kansas City at New Orleans — We can already hear CBS shilling this as a Super Bowl preview. Just might be, of course. It sure would be nice if Drew Brees is back to face off with Patrick Mahomes.

New England at Miami — With only that one true headliner for this week, it's worth mentioning that Brian Flores, who used to work for the Patriots, could seriously dent any postseason hopes his former boss has.

Los Angeles Rams at Seattle — The two best teams in the NFL's top division, though neither seems steady or powerful enough to win the conference just yet. By mid-December, maybe both will have found that look. Regardless, the Seahawks probably are the most fun team to watch in the entire league.

San Francisco at Arizona — We'll throw this one in, too, because the Niners are getting healthy and the Cardinals, while exciting, also make your head spin with their inconsistency. Should be entertaining, and possibly quite meaningful in the playoff chase.

Indianapolis at Pittsburgh — If the Steelers get by Buffalo, another test, though maybe not as formidable as the Bills, awaits them. As Ben Roethlisberger has mentioned, Pittsburgh is chasing the Lombardi Trophy, not a 16-0 record. Still ...

Pittsburgh at Cleveland — Through 12 weeks, the Browns have beaten one team with a winning mark, Indy in Week 5. The rest of their victims currently are 17-47-2. That said, and with them likely in the playoffs thanks to that easy schedule, beating archrival Pittsburgh no matter the circumstances means a lot to Cleveland. And if the Steelers are 15-0?

Miami at Buffalo — This could decide the AFC East, but history tells us the last place the Dolphins want to be in the dead of winter is Buffalo. The Bills might have the division wrapped up and would be seeking a high seed, while Miami could need a win to qualify for the playoffs.

New Orleans at Carolina — Will the Saints be in position to clinch the top NFC seed and that coveted single bye for wild-card weekend?

Green Bay at Chicago — Will the Packers be in position to clinch the top NFC seed and that coveted single bye for wild-card weekend?

Seattle at San Francisco, Arizona at Los Angeles Rams — Again, the best sector in the NFL, and it probably won't have been decided before the final weekend. The Seahawks and 49ers, to be kind, don't like each other (they despise each other). The Cardinals and Rams should be right in the mix of the NFC West as well.

Dallas at New York Giants, Washington at Philadelphia — OK, OK, we know, it's the NFC Least and America could be looking at a six-win (or worse?) division champion. Regardless, the division crawl, uh, race figures to come down to these two contests.

New York Jets at New England — The third 0-16 season in a dozen years could be in sight. Conspiracy theorists wonder if the Patriots would willingly lose this one if it would prevent the division rival Jets from securing the top overall draft choice — and, presumably, Clemson quarterback Trevor Lawrence.

The Latest: Sharks to open home schedule hosting in Ari ...