Time has all but run out on the NHL’s hope to start the season Jan. 1, with the league and NHL Players’ Association now focusing their discussions on opening play in mid-January, a person familiar with the talks told The Associated Press on Friday.

A mid-January start date has become more realistic given the number of issues that need to be resolved before players can begin traveling to their home cities, according to the person who spoke to The AP on the condition of anonymity because the discussions are private.

The two sides still need to agree on a schedule, with the current working plan featuring between 52 and 56 regular-season games. There has also been talk of a buffer being worked into the schedule in the event games are postponed due to the coronavirus pandemic, the person said. 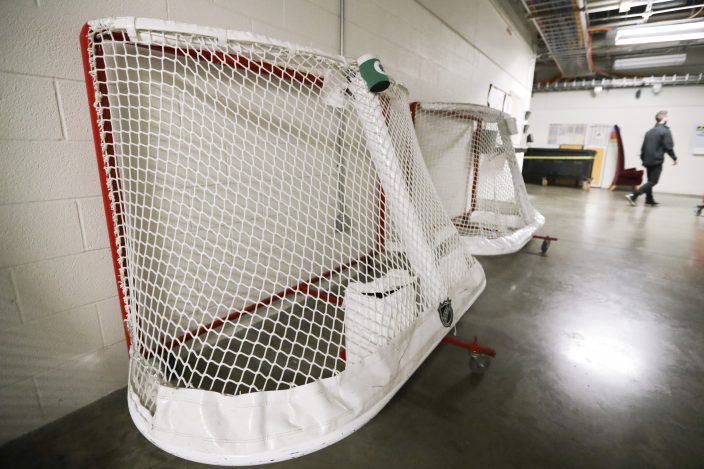 FILE - In this March 12, 2020, file photo, goals used by the NHL hockey club Nashville Predators are stored in a hallway in Bridgestone Arena in Nashville, Tenn. Time is running short for the NHL to start its season on Jan. 1. Various pandemic-related geographic and economic issues remain unresolved. (AP PhotoMark Humphrey)

Without going into detail, NHL deputy commissioner Bill Daly told The AP “various similar concepts are being discussed” when asked about the 52- or 56-game schedule and mid-January start.

Also needing to be resolved is a one-time divisional realignment, with the likelihood of there being an seven-team all-Canada division due to cross-border travel restrictions, as well as an updated COVID-19 protocol for players and teams.

Under a mid-January start date, players would have to begin reporting after Christmas, followed by a shortened training camp and preseason. The regular season would likely stretch into early May at the latest, with the Stanley Cup Final targeted to end in late June or early July.

It would be similar to the 2013 season, which began in mid-January and featured a 48-game schedule as a result of the NHL lockout. Teams also played a more condensed schedule by squeezing in 48 games over just under 100 days. In a normal season, teams play 82 games over the span of about 185 days in a schedule that includes breaks for Christmas, the All-Star Game and a bye week.

The start of the 2020-21 season has been considered flexible based on the uncertainties involving the pandemic. The league initially considered having the season start in late November or early December, before pushing it back to Jan. 1.

Commissioner Gary Bettman raised the likelihood of the date being changed this week during a Sports Business Journal panel discussion by calling it “a work in progress.”

The discussions regarding the start to the season have been ongoing, and are separate from the recent economic concerns raised by the NHL.

Some five months after extending the collective bargaining agreement, the league has proposed altering the deal to make up for projected losses affecting the 50-50 revenue split between owners and players.

The CBA currently calls for players to defer 10% of their salary for the upcoming season and it puts a cap on how much money will be kept in escrow over the length of the deal.

Last month, the league raised the possibility of having players increase salary deferrals to 20% or 26% and increasing the escrow caps.

Though Bettman said the league is not attempting to renegotiate the CBA, the players and several agents have accused the NHL of attempting to renege on what was agreed to in July. Agent Allan Walsh posted a series of tweets this week saying the NHL should have foreseen the possibility of the pandemic lasting into 2021 and the economic impact of lost ticket revenue.

“They have a deal,” Walsh wrote. “Bottom line, some owners don’t like the deal and want better terms.”

One of the biggest unanswered ques ...