The NFL has seen major COVID-19 outbreaks for the Titans and Ravens. Big stars and coaches have been stricken by the disease. There have been plenty of scheduling adjustments. Here’s a look at how each team has been impacted by the coronavirus.

The Titans had the NFL’s first outbreak that forced the first postponement and then rescheduling of a game this season. Their game against Pittsburgh moved from Oct. 4 to Oct. 25 and wiped out their bye week. Their outbreak affected 24 players and personnel and postponed a second game — against Buffalo — for two days to a rare Tuesday night on Oct. 13. Since then, they’ve had only two players placed on the reserve/COVID-19 list. 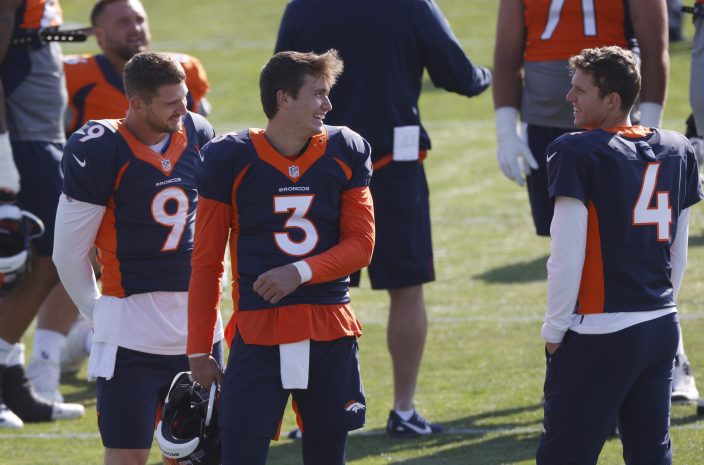 FILE - Denver Broncos quarterback Drew Lock, center, jokes with backup quarterbacks Jeff Driskel, left, and Brett Rypien during an NFL football practice in Englewood, Colo., in this Monday, Aug. 31, 2020, file photo. The Broncos activated three quarterbacks—starter Lock and backups Rypien and Blake Bortles—from the COVID-19 list Tuesday, Dec. 1, 2020, to insure that the team will not be without quarterbacks on the roster for the game against the Chiefs in Kansas City on Sunday as the Broncos were last Sunday when hosting the New Orleans Saints. (AP PhotoDavid Zalubowski, File)

“What we dealt with was unfortunate, and we handled it the best that we felt like we could,” coach Mike Vrabel said. “Every team is different. Every situation is different. I’m proud of the fact that the past few cases that we had were isolated with zero close contacts, and that’s a testament to our players, our staff.”

An outbreak among the Ravens and staff followed an overtime loss to Tennessee on Nov. 22 and decimated Baltimore’s roster heading into a pivotal Thanksgiving rematch with the Steelers. The game was postponed to Sunday, then Tuesday, then Wednesday. When the Ravens got on the field they had gone 10 days without playing and were without several key players, including quarterback Lamar Jackson, the 2019 NFL MVP. 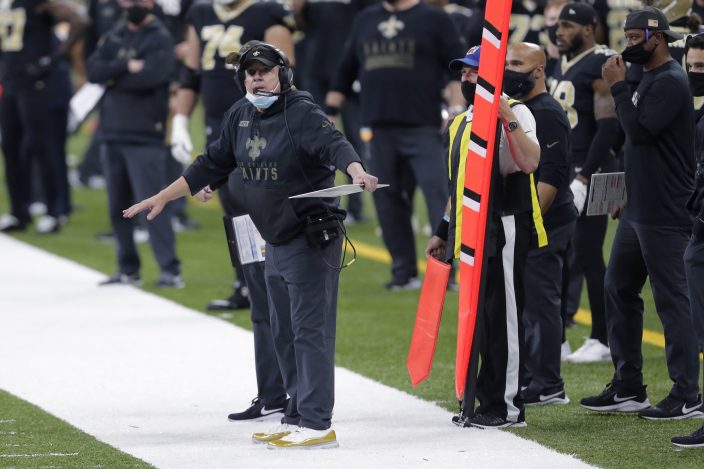 FILE - In this Sunday, Nov. 22, 2020 file photo, New Orleans Saints head coach Sean Payton reacts on the sideline in the first half of an NFL football game against the Atlanta Falcons in New Orleans. The NFL has fined the New Orleans Saints $500,000 and stripped them of a 2021 seventh-round draft pick for violating league COVID-19 protocols, a person with direct knowledge of the discipline told The Associated Press on Sunday, Nov. 29. New Orleans was fined as a repeat offender; Payton previously was docked $150,000 and the team $250,000 because the head coach failed to properly wear a face covering against the Raiders in Week 2. (AP PhotoBrett Duke, File)

Baltimore lost 19-14. Coach John Harbaugh appreciated the play and effort of the backups on the thin offensive and defensive lines.

The NFL’s lone unbeaten team dealt with ripple effects of outbreaks elsewhere: moving the Titans and Ravens games, switching their bye week. The Steelers recently sent to the COVID-19 list a group that includes tight end Vance McDonald and running back James Conner.

Eight players have gone on the reserve/COVID-19 list, three assistant coaches have been infected — defensive coordinator Ed Donatell missed all of November and was hospitalized at one point with respiratory complications — plus GM John Elway and CEO Joe Ellis were infected.

Denver essentially lost its bye week because of New England's issues, and last Sunday the Broncos lost to the Saints 31-3 without any quarterbacks. Starter Drew Lock, backup Brett Rypien and practice squad veteran Blake Bortles were deemed high-risk close contacts of No. 3 QB Jeff Driskel, who tested positive on Thanksgiving.

Players, coaches and the organization have been fined more than $1.2 million and docked a sixth-round pick for COVID-19 violations.

The team practiced the entire week before the Tampa Bay game without the starting offensive line after tackle Trent Brown tested positive. The other four linemen returned the morning of the game and the Raiders lost 45-20. Defensive lineman Clelin Ferrell tested positive leading up to the Kansas City game, several other defensive starters missed practice as high-risk close contacts before most returned to play in the 35-31 loss.

If anything, the Saints were the beneficiary of another team running afoul of COVID-19 protocols when they played undermanned Denver.

The Niners have relocated to Arizona for at least three weeks when Santa Clara County banned contact sports and practices. San Francisco will practice and play its next two home games in Arizona.

Receivers Kendrick Bourne and Brandon Aiyuk and left tackle Trent Williams were idle for a loss to Green Bay; several players then were placed on the COVID-19 list after defensive lineman Arik Armstead tested positive following a loss at New Orleans on Nov. 15.

The Browns spent the better part of the past month dealing with facility shutdowns, virtual meetings and practices being moved or canceled on a nearly daily basis. They’ve placed several players, including star DE Myles Garrett, on the COVID-19 list; he missed two games. Last week against the Jaguars, the Browns also were without starting linebacker Sione Takitaki and fullback Andy Janovich because of positive cases.

One of the teams not to have a player opt out for the season, and no player went on the COVID-19 list until late October.

But Los Angeles had its bye week moved from mid-November to mid-October, and with other switches, the only thing unchanged from Weeks 6-11 was a home game against Las Vegas remained on Nov. 8.

“We don’t say why us. We know there are going to be changes,” coach Anthony Lynn said. “When other games are going to be canceled at some point it is going to affect our schedule. That’s just the way it is.”

The Bills had three games altered: their game at Tennessee, a Thursday night home game against Kansas City switched to the following Monday evening, and the upcoming Monday nighter vs. the 49ers, now being played in Arizona.

Tight end Tommy Sweeney tested positive and will miss the remainder of the season after being diagnosed with myocarditis, an inflamed heart condition linked to the novel coronavirus.

A scare came after Tennessee’s outbreak was reported two days after playing at Minnesota, forcing the Vikings to close their facility and miss a Wednesday practice. Receiver Adam Thielen was the first player of significance to miss a game, but the Vikings beat Carolina without him.

The biggest impact of the virus might have come in July when new nose tackle Michael Pierce opted out of the season due to asthma-related health concerns. The Vikings have lacked a run-stuffing presence in the middle.

Leading to a Nov. 5 game at San Francisco, rookie RB A.J. Dillon tested positive and fellow running back Jamaal Williams also was placed on the COVID-19 list as a close contact. Dillon remains on the list.

The Packers, like most teams, haven’t played in front of paying fans. They allowed about 300 team employees and family members last Sunday night to test stadium protocols in case paying fans are allowed at games later this season.

With the most players (12) on the COVID-19 list to open training camp, the Jaguars have done better than others since. RB Ryquell Armstead was placed on the list twice, was hospitalized twice and dealt with respiratory issues. Armstead is expected to make a full recovery.

The Jaguars did have their bye moved up a week.

Regular cornerbacks Trae Waynes and Mackensie Alexander, and defensive end Margus Hunt have been on the list. Cincinnati shut down its practice facility midweek in early November after two players tested positive.

Coach Frank Reich also has said in the wake of last weekend’s quarterback debacle in Denver, the Colts considered sending backup quarterback Jacoby Brissett home to do meetings virtually — in case Philip Rivers contracted the illness. Indy never did that, though.

The Eagles haven’t had any starters miss games because of COVID-19, but coach Doug Pederson had it in training camp.

“I’m comfortable and confident that the (safety) protocols we have in place are for the best interests of the football team and all those who enter the building,” Pederson said in August. “It still is a very safe environment.”

The Lions practiced without Matthew Stafford when they played at Minnesota in early November because the quarterback was deemed a close contact. Stafford, who had a publicized false positive in the preseason, stayed in a hotel away from his family before and after he played in that game.

Only one starter has spent time on the COVID list, DL William Gholston, and he didn’t miss a game. Special teams player Jaydon Mickens missed a game,

When the NFL directed teams to begin the intensive protocol, prohibiting in-person meetings unless they were outdoors, the Bucs continued in-person meetings at the training facility by setting up tents outside the building and conducting socially distanced meetings in the makeshift spaces.

“We’re very, very fortunate to have the facility and the weather that we can meet outside,” coach Bruce Arians said.

QB Andy Dalton’s positive test forced him to miss a second straight game after he had been sidelined for one with a concussion. The Cowboys started rookie Ben DiNucci in a 23-9 loss to Philadelphia. Dalton missed another loss, with Garrett Gilbert facing Pittsburgh.

Five players tested positive in season. LG Will Hernandez was the first on Oct. 29 and he missed two games. All O-linemen but RG Kevin Zeitler had to isolate because of close contact. The regulars came back without missing any games.

And fifth-round draftee Shane Lemieux has played so well Hernandez lost his job.

Kicker Graham Gano tested positive last month, was sidelined and is back now.

Nose tackle Eddie Goldman opted out of the season, damaging the inside defense. The Bears also had to cancel practice and close their facility for a day last month.

Only one player, already on IR, has tested positive for COVID-19. The scheduling change this week from other disruptions saw Washington’s game at Pittsburgh shifted from Sunday to Monday.

Some half-dozen players have been on the COVID-19 list, notably CB Rasul Douglas for two games. The Panthers twice have been in intense protocol.

Top LB C. J. Mosley opted out. Only tight end Ross Travis, on the practice squad at the time, has been on the list during the regular season. They had four players on it during training camp, rookie CB Bryce Hall, now a starter, the only one still with the team.

The Rams erected a massive tent in the parking lot of their training complex to hold team meetings outdoors, taking advantage of Southern California’s mild weather to minimize exposure to recycled air and close quarters. Only one outbreak, with three practice squad players affected during the season.

The Chiefs have been remarkably clear of COVID-19 positives. They lost WR Mecole Hardman for a game in Week 10. LT Eric Fisher and RT Mitchell Schwartz tested positive along with backup OL Martinas Rankin, but Fisher was cleared to return and Schwartz already was out with a back injury.

A handful of players have missed time because of the virus. The Texans played at Jacksonville without linebackers Whitney Mercilus, Jacob Martin and Dylan Cole after Martin tested positive. Martin also missed the next game, but Mercilus and Cole returned. Offensive tackle Max Scharping tested positive for the virus during the team’s bye week, forcing the closure of the facility, and he missed one game.

Seattle is the only NFL team with no confirmed COVID-19 cases among players. Coach Pete Carroll has regularly stressed the importance of following protocols.

“We feel very fortunate that we are where we are, and we feel like we’re kind of anticipating what’s coming,” Carroll said. “So we’re in good shape right now and hopefully we just keep it going. This is a one day at a time deal. That’s all we got.”