“This deal took a while to get over the line, but I’m just really thankful it did,” O'Hara said Friday. “It’s the best Yuletide present I think I’ve ever received. I’m just thankful that it finally got to a place where I can now call D.C. my home off the field, but on the field as well."

O'Hara was traded this week to the Spirit in exchange for $75,000 in allocation money and other contingencies. 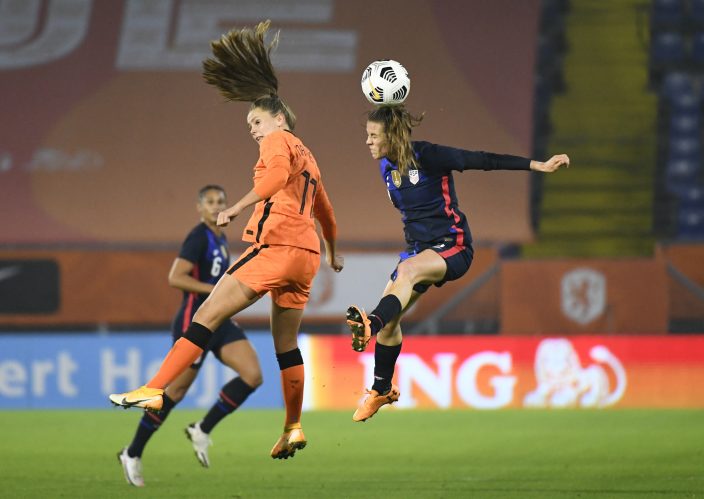 United States' Kelley O'Hara heads the ball as she jumps with Netherlands' Lieke Martens during the international friendly women's soccer match between The Netherlands and the US at the Rat Verlegh stadium in Breda, southern Netherlands, Friday Nov. 27, 2020. (Piroschka van de WouwPool via AP)

The veteran defender has made 131 appearances with the U.S. national team. She has been on the roster for three World Cups and two Olympics.

“We talk about trophies and she’s won quite a few. That’s the type of player we want to bring to the club, the quality that she will add to our roster," said Spirit co-captain Tori Huster. "And then on top of that -- and something that probably will help me a lot -- is going to be her experience and just helping the younger ones. We have a ton of them on the team, and I am very hopeful that they will take all of the opportunities to ask her questions and learn from her.”

O'Hara, 32, is among the national team players allocated across the National Women's Soccer League.

The NWSL's eighth season was canceled because of the coronavirus, but the league played the Challenge Cup tournament in a bubble in Utah this summer before a fall series of matches in local markets.

O'Hara grew up in Georgia and played for Stanford. She moved to the Washington, D.C., area about a year ago, she said.

She joins a Spirit club that is on the rise after an overhaul in 2019. The team finished second in the group stage of the Challenge Cup but got eliminated by Sky Blue in the quarterfinals. The Spirit finished third in the league's fall series.

"When you gain the type of player that we’ve gained, the leadership that we’ve gained with that, and just how she trains when she steps on the field, and our young players watching her attitude, how professional she is in preparation and training, I think that’s going to be huge, huge for our football club,” Spirit coach Richie Burke said.

O'Hara played in just two of Utah's Challenge Cup matches this season and made only 14 total appearances with the club during her tenure because of injuries and international absences.

“I wish Utah nothing but the best,” O'Hara said. "I’m so thankful for what they gave me and the experience they gave me these last three years, but I’m very excited to be part of this specific team now, this club and this city, and working towards bringing a lot of fun times and wins to the District.”

Before joining the Royals, O'Hara played five seasons for the NWSL's Sky Blue.