The Green Bay Packers are shuffling their offensive line again this week due to injuries, with rookie guard Jon Runyan Jr. potentially making his first career start against his father’s old team.

It's nothing new for a versatile line that has protected its quarterback as effectively as just about any team in the league.

“We’ve been able to roll a lot of guys in on the offensive line, started a lot of combinations,” Packers coach Matt LaFleur said. “That’s not necessarily ideal, but our guys have done a great job.” 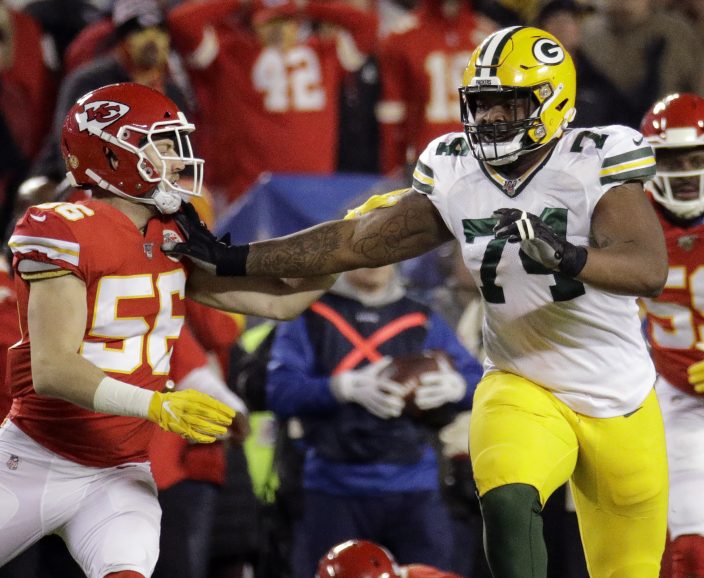 The latest injury involves center Corey Linsley, who won’t play Sunday against the Philadelphia Eagles (3-7-1) after hurting his knee in a 41-25 victory over the Chicago Bears. When Linsley left the Bears game, Green Bay shifted left guard Elgton Jenkins to center and inserted Runyan at left guard.

Runyan’s father played for the Eagles from 2000-08 and is now the NFL’s vice president of policy and rules administration.

“It’s one of those games that I’m excited to get the opportunity to play in,” said Runyan, a sixth-round draft pick from Michigan. “Growing up, it’s a team that I always watched ever since I was like 3 years old and pretty much all the way up until last year.” 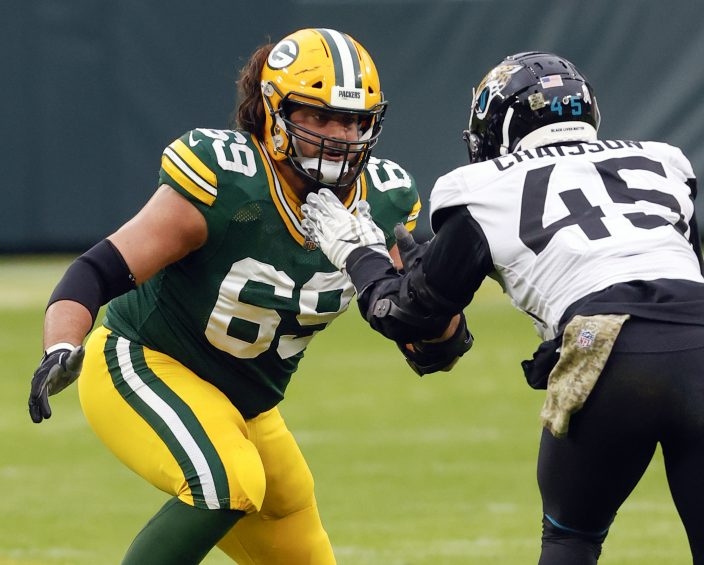 Yet the Packers have averaged a league-high 31.7 points per game while allowing only 12 sacks. The Pittsburgh Steelers are the only NFL team to give up fewer sacks than the Packers this season. The Indianapolis Colts also have allowed only 12 sacks.

Green Bay’s offensive line is coming off arguably its best performance of the season. The Packers yielded no sacks and rushed for 182 yards against the Bears’ highly regarded defense despite losing Linsley and right guard Lucas Patrick. Patrick has practiced on a limited basis this week with a toe injury.

Jenkins has played every position on the line but right guard this season. Turner has made six starts at right tackle and three at left tackle, but he also has played guard.

Their versatility has enabled the Packers to utilize their best five linemen rather than playing someone who isn’t as good just because he’s the only guy who can fill a particular spot.

“These guys are professionals, man,” offensive line coach Adam Stenavich said. “It’s a testament to their mentality and how they approach things that they’re able to go out there at different positions and perform well.”

Both Jenkins and Turner already were accustomed to playing multiple positions. Jenkins started games at every offensive line position but right guard at Mississippi State. Turner has started NFL games at both tackle and both guard spots.

That makes a position change midway through a game more manageable, but it’s still not an easy process.

“Being able to, in the middle of a game, go from one side to the other, it’s not necessarily the physical part,” Turner said. “You know you’re capable of physically doing those actions, those techniques that you’ve practiced for so long. It’s really just the mental aspect to tell yourself, ‘OK, instead of pushing with this leg I have to push with the opposite. Instead of throwing this hand first, I have to use this hand.’"

The Packers have figured things out well enough to allow one sack or less in 10 of their 11 games this season, something quarterback Aaron Rodgers pointed out Sunday night.

“For a soon-to-be 37-year-old, that’s my dream," Rodgers said. “That’s an amazing feeling, to go home and not be feeling like an almost-37-year-old.”

Rodgers now actually is 37 after celebrating his birthday Wednesday. That should give this line even more incentive to continue protecting him as well as it has all season.

NOTES: Outside linebacker Za’Darius Smith didn’t practice for a second straight day Friday due to an ankle injury. He’s listed as questionable for Sunday’s game. LaFleur said he’s “not overly concerned about it” but added that it’s something that Smith has been dealing with all season. … Linebacker Krys Barnes (calf) and running back/kick returner Tyler Ervin (ribs) also are questionable.