The governing board in Newtown, Connecticut — where the country's deadliest grade school shooting took place — has blocked proposed bans on carrying firearms around town from further consideration.

The decision came after the board heard from gun control activists who said they were intimidated at protests by armed Second Amendment supporters. The debate showed how the gun control discussion remains active in Newtown long after the 2012 Sandy Hook Elementary School massacre, which killed 20 first-graders and six educators. The eighth anniversary of the shooting is coming up on Dec. 14.

After listening to testimony from both sides of the issue Wednesday night by phone because of the pandemic, the Newtown Legislative Council deadlocked in 6-6 votes on whether to refer three proposed gun restriction ordinances to the council’s Ordinance Committee, effectively killing the requests. 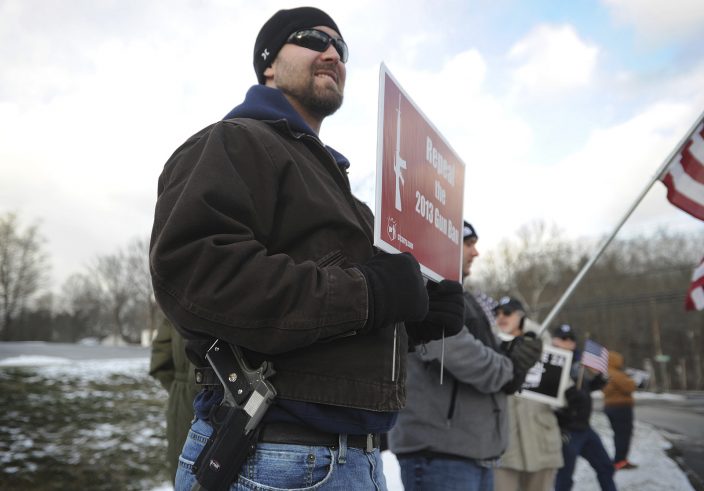 Robert Harris, of Old Saybrook, open carries a pistol on his hip as he a fellow gun rights advocates show up early to oppose a gun control rally outside the National Shooting Sports Foundation's corporate headquarters on Jan. 18, 2016, in Newtown, Conn. Less than two weeks before the eighth anniversary of the Newtown school shooting, the local governing board has rejected on Wednesday, Dec. 2, 2020, proposed bans on carrying of firearms around town requested by gun control activists who said they were intimidated at protests by armed Second Amendment supporters. (Brian A. PoundsHearst Connecticut Media via AP)

Members of the Newtown Action Alliance, formed after the school shooting to prevent gun violence, had proposed the measures, in response to feeling threatened by gun rights advocates carrying firearms during protests outside the National Shooting Sports Foundation, a gun industry group that happens to be based in Newtown.

“It’s disheartening and disappointing to live in a community where the leaders are choosing not to take our recommendations seriously, particularly after what we’ve been through in this community,” said Po Murray, a local resident and chair of the alliance.

“As white extremism is spreading across the country where they are using guns to intimidate people, particularly the Black Lives Matter movement, I think it’s really important to preemptively take measures to prevent any type of incidents here in Newtown,” she said Friday.

Representatives from the National Shooting Sports Foundation and the Connecticut Citizens Defense League were among those who testified against the proposed gun restrictions, which called for prohibiting the open carrying of firearms in town and the possession of guns at demonstrations and on town property.

Oliva also said it was “as outrageous as it was insulting” that Murray would compare the foundation and gun owners with extremists and white supremacists.

Holly Sullivan, president of the Connecticut Citizens Defense League, said while gun control advocates may have felt intimidated by gun rights supporters carrying firearms, that is not the intent of gun owners. She has been among the counterprotesters outside the foundation's headquarters.

Connecticut law allows the open carrying of handguns and long guns. Owners must have handgun permits or long gun eligibility certificates, both of which require background checks and training.

Connecticut also is one of only seven states that do not completely ban local governments from passing their own gun laws, according to the Giffords Law Center to Prevent Gun Violence. The Connecticut Supreme Court, however, has struck down local gun laws that conflicted with state statutes.

Ryan Knapp, a Republican member of Newtown's Legislative Council, voted against the proposed gun restrictions, questioning whether the town could prohibit gun owners from doing things they're allowed to do under state law.

“Different people feel different ways about this,” he said. “I think ultimately this is a legal question and not a feelings question. And I don’t think it’s our purview to decide that. And I don’t want to commit the taxpayers of Newtown to funding the defense of that if I’m not confident it’s legal.”

The council is, however, seeking a legal opinion from the town attorney on whether the council has the authority to ban the open carrying of guns on town property.