One leading candidate for agriculture secretary hails from Cleveland, has the backing of progressives and has worked for years to boost food stamp programs. Another is a former senator from farm-state North Dakota who has championed production agriculture and boasts of a voting record squarely in the middle.

Three other possible selections have similarly varied backgrounds — one helped write and implement federal regulations for organic foods, another is California’s agriculture secretary and represented wine grape growers, and a third has spent his career ensuring protections for farm workers.

President-elect Joe Biden’s choices for secretary of agriculture are as diverse as the department of 100,000 employees that she or he would represent — and is especially critical this year as USDA provides extra aid for the hungry and oversees food production amid the pandemic. 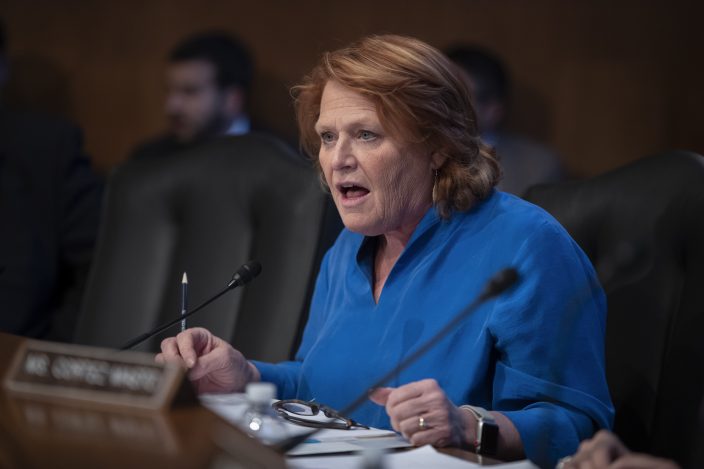 FILE - In this Dec. 12, 2018, file photo, Sen. Heidi Heitkamp, D-N.D., attends her last hearing with the Senate Committee on Indian Affairs as they examine concerns about investigations into the deaths and disappearance of Native American women, on Capitol Hill in Washington. Two Democratic women are contenders to be President-elect Joe Biden's secretary of agriculture. Rep. Marcia Fudge of Ohio and former Sen. Heidi Heitkamp of North Dakota are in the running for the Cabinet position. (AP PhotoJ. Scott Applewhite, File)

For Biden, the emerging choice between Rep. Marcia Fudge of Ohio, former Sen. Heidi Heitkamp of North Dakota and several other potential candidates seems like another test of his vision for the Democratic Party — a contest between urban and rural and liberals and moderates, with the pick potentially placing an added emphasis on anti-hunger programs, farm subsidies or worker protections.

Besides Fudge and Heitkamp, other candidates mentioned for the post — and who have been pushed by some advocacy groups — are Kathleen Merrigan, deputy agriculture secretary under President Barack Obama and one of the architects of federal organic rules; Karen Ross, California’s agriculture secretary, former USDA chief of staff and a former longtime president of the California Association of Winegrape Growers; and Arturo Rodriguez, the former president of the United Farm Workers.

“This isn’t like the secretary of defense where you’re a hawk or a dove,” says Eric Kessler, a Democrat who has long worked around agriculture policy and has been holding private calls with other influencers to speak with some of the possible candidates. “The Department of Agriculture is a massive enterprise that is led by a manager who is dependent on a diverse team of people."

And as Biden has said he wants his Cabinet to reflect the country's diversity, Kessler says the decisions on USDA and other agencies will “be driven by lots of factors, not just the individual's specific resume.”

The agriculture post has been closely watched as all but two agriculture secretaries in the last 120 years have been white men. If chosen, Fudge would be the first Black woman to lead a department that has for years reckoned with a history of discriminating against both Black people and women.

Under Obama, the department paid out more than a billion dollars in a settlement with Black farmers and a smaller amount to female farmers, along with Hispanics and Native Americans who had repeatedly been denied farm loans over many decades.

Fudge enjoys the strong backing of South Carolina Rep. Jim Clyburn, the No. 3 House Democrat who gave Biden a key nod of support in the primaries. Biden has said he wants a diverse Cabinet, and some Black leaders have said he needs to do more to achieve that.

Clyburn has aggressively pushed Fudge for the post, saying Biden should pick someone who “understands the other side of agriculture ... It’s one thing to grow food, but another to dispense it, and nobody would be better at that than Marcia Fudge.″

As a member of the House Agriculture Committee, Fudge has fiercely advocated for food stamps and other federal programs that help urban areas stem hunger and grow food. Beyond Clyburn, she has the backing of progressive groups who hope she could turn the department’s focus. In a joint letter to Biden, several of those groups said Fudge "has long been an ally to farmers, food-chain workers, consumers and rural communities.’’ Some unions have also backed her as she has pushed for worker protections in meatpacking plants during the pandemic.

Heitkamp is a favorite of farm groups that have worked closely with her and of Democrats who want to improve their outreach to rural areas. But she has also been a strong supporter of food aid programs, having represented swaths of rural poverty until her reelection defeat in 2018. And her family relied on food stamps intermittently when she was growing up as one of seven children from a town of 90 people in the state.

Farm programs — billions of dollars in subsidies for commodity crops and grants for rural infrastructure, among other benefits — and food aid for the poor have long been welded together in Washington. Lawmakers of both parties who support one piece have traditionally supported the other, creating a compact that has held firm amid growing partisanship.

Though they have different backgrounds, Fudge and Heitkamp have helped craft and voted for several multibillion-dollar farm bills that supported both sectors.

"Agriculture is one place that in a post-Trump world the secretary will play a very important role in bringing different perspectives and parties together,” said Matt Paul, a longtime aide to Vilsack who worked at USDA with him. “There’s really not a choice. You’ve got to do both.”

While Vilsack, Merrigan and Ross all have significant leadership experience at USDA, Rodriguez would be an unusual pick as his experience mostly centers on the labor sector. But he has the backing of Texas Rep. Joaquin Castro, the chair of the Congressional Hispanic Caucus, who wrote in an op-ed this week that appointing him as the first Latino secretary of agriculture “would finally give Latinos real power in the agricultural industry, the industry that our labor has held up for so long.”

Heitkamp would have one big advantage over all the other candidates: an easy path to confirmation in the Republican-led Senate, where she was well liked and often worked across the aisle.

She already has the backing of West Virginia Sen. Joe Manchin, a fellow moderate Democrat who joined her in supporting some of Trump’s nominees four years ago. “You won't find a better person thant Heidi Heitkamp,” Manchin said in a statement, adding that she would make a “tremendous” agriculture secretary.

And at least two Republican senators have praised her as well — Iowa Sen. Chuck Grassley, who tweeted this week about her ability “to get things done," and Senate Agriculture Committee Chair Pat Roberts, who is retiring at the end of the year.

“She’s easy to work with,” he said. “I don’t think she’s that partisan, but she knows agriculture.”