NEW DELHI — India has registered 36,652 confirmed coronavirus cases in the past 24 hours.

India’s health ministry on Saturday also recorded 512 deaths in the past 24 hours, taking total deaths to nearly 140,000. The pace of new cases has seen a downward trend, with single-day cases remaining below the 50,000 mark a month.

India has 9.6 million total cases, second behind the U.S. with 14.3 million. But globally it has one of the lowest deaths per million population, according to the Health Ministry. 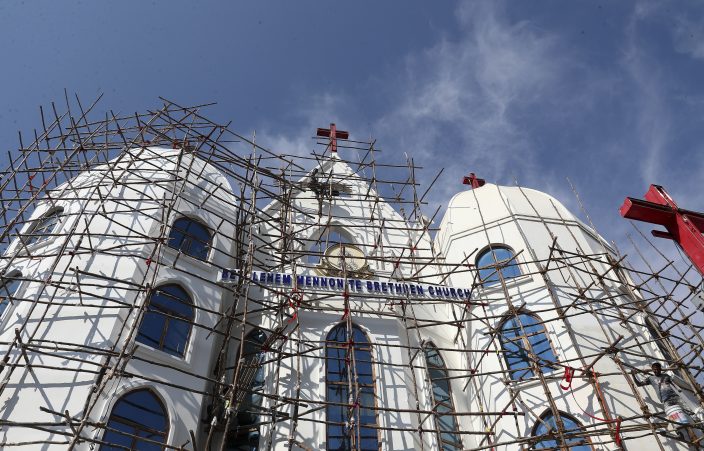 Indian workers paint a church ahead of Christmas in Hyderabad, India, Saturday, Dec. 5, 2020. Christians make up about 2 percent of India's 1 billion-plus population. (AP PhotoMahesh Kumar A.)

India’s home ministry has allowed states to impose local restrictions, such as night curfews. It has asked state officials to consult before imposing lockdowns at state, district or city levels. 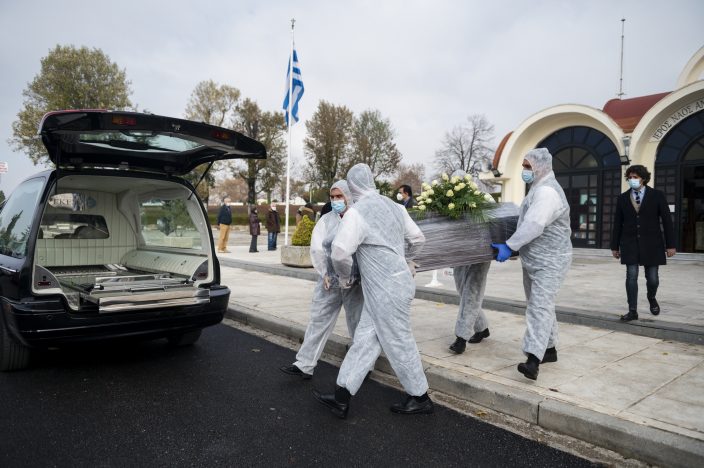 Pallbearers wearing protective suits and gloves, carry a coffin during a funeral ceremony for a person who died of COVID-19, in the northern city of Thessaloniki, Greece, Saturday, Dec. 5, 2020. Greece is on lockdown until Dec. 7 but government officials say it is too early to say when schools and businesses will reopen due to continued pressure on the state-run health service, with intensive care wards near capacity in parts of the country. (AP PhotoGiannis Papanikos)

— Coronavirus relief on the table as U.S. Congress seeks deal 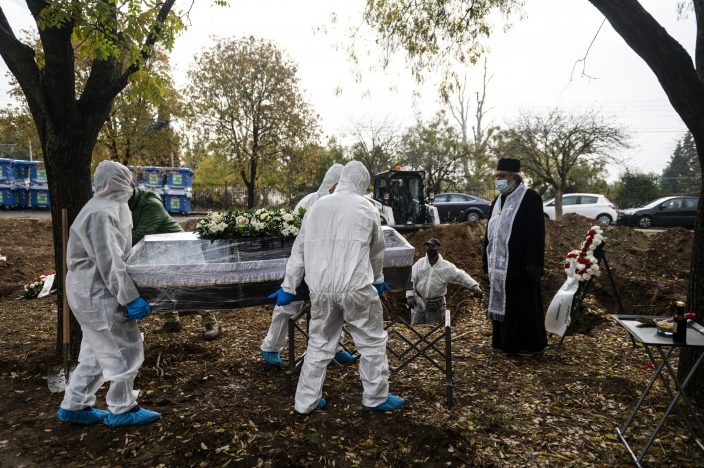 Pallbearers wearing protective suits and gloves, carry a coffin as an Orthodox priest looks on, during a funeral ceremony for a person who died of COVID-19, in the northern city of Thessaloniki, Greece, Saturday, Dec. 5, 2020. Greece is on lockdown until Dec. 7 but government officials say it is too early to say when schools and businesses will reopen due to continued pressure on the state-run health service, with intensive care wards near capacity in parts of the country. (AP PhotoGiannis Papanikos)

HARTFORD, Conn. — Connecticut Gov. Ned Lamont has signed an order allowing the state Department of Labor to expand eligibility for a federal pandemic unemployment program to an estimated 38,000 people who were previously disqualified. 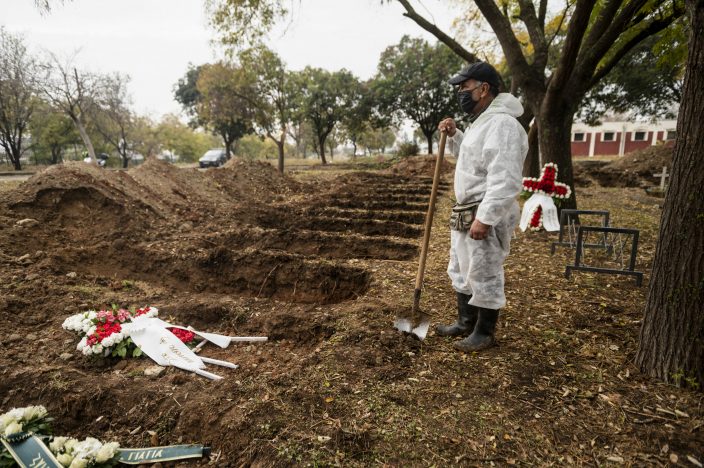 A worker stands over graves during a funeral ceremony for a person who died of COVID-19, in the northern city of Thessaloniki, Greece, Saturday, Dec. 5, 2020. Greece is on lockdown until Dec. 7 but government officials say it is too early to say when schools and businesses will reopen due to continued pressure on the state-run health service, with intensive care wards near capacity in parts of the country. (AP PhotoGiannis Papanikos)

Under Friday’s order, $7.5 million from the state’s unemployment trust fund will be used make sure residents who are unemployed due to the coronavirus outbreak and were previously disqualified from receiving the temporary, extra financial benefit receive at least $100 a week in unemployment benefits.

That would then make them eligible retroactively for an additional $300 under the federal Lost Wages Assistance Program.

More than 160,000 Connecticut residents already received the supplemental federal benefits, resulting in a total of $370 million being allocated over six weeks, from July 26 to Sept. 5. 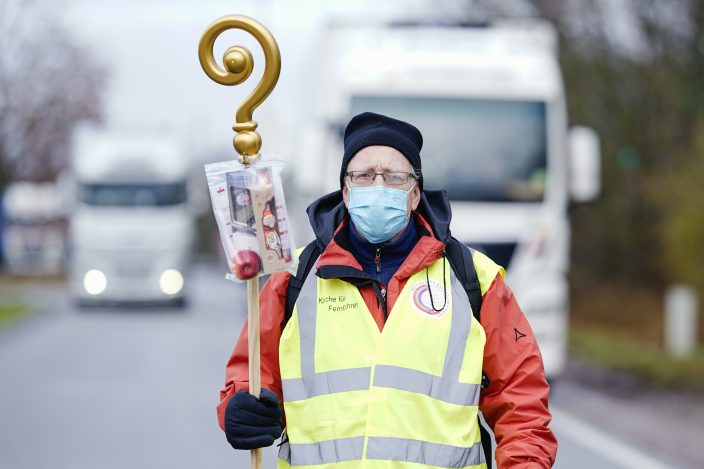 Pastor Michael Ohlemueller is standing at the motorway service station Wonnegau near Worms, Germany, with a crosier with chocolate Santa Claus and apple in a bag, which he wants to distribute as a gift to truck drivers. The action is intended as a thank you and appreciation for the drivers' work. ( Uwe Anspachdpa via AP)

CASPER, Wyo. — An official in Wyoming’s Department of Health involved in the state’s response to the coronavirus is questioning the legitimacy of the pandemic and describes a forthcoming vaccine as a biological weapon.

The Casper Star-Tribune reports that Igor Shepherd called COVID-19 a “so-called pandemic” at a Nov. 10 event in Loveland, Colorado. It says Shepherd described efforts to develop a vaccine as a plot by Russia and China to spread communism worldwide.

Shepherd was introduced as a Wyoming Department of Health employee before his presentation. 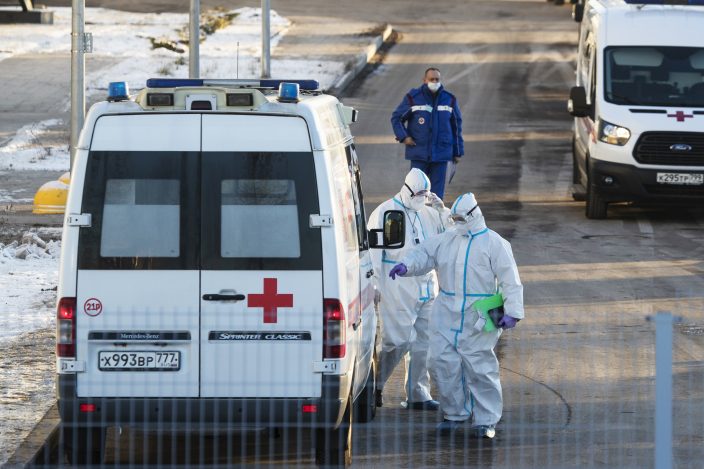 Medical workers wearing protective gear return to their ambulance after transferring a patient suspected of having coronavirus at a hospital in Kommunarka, outside Moscow, Russia, Saturday, Dec. 5, 2020. Thousands of doctors, teachers and others in high-risk groups have signed up for a COVID-19 vaccination in Moscow starting Saturday, a precursor to a Russia-wide immunization effort. (AP PhotoPavel Golovkin)

Wyoming Gov. Mark Gordon and other top state officials have declined to comment.

VENTNOR, N.J. — The FBI is telling anyone who underwent a coronavirus test at a New Jersey laboratory to get retested and to contact the agency.

In a statement Friday on Twitter, the FBI’s Newark office urges people who were recently tested for the virus at Infinity Diagnostic Laboratory in Ventnor “to be retested as soon as possible.” It also asks that anyone who was administered a finger-prick blood test at the laboratory to contact a victim assistance unit at the FBI.

The announcement gave no further details, and a message left with the FBI seeking further information was not immediately returned.

Voicemail for the company’s operations director Friday evening said it was closed and didn't offer the opportunity to leave a message.

NASHVILLE, Tenn. -- Tennessee Gov. Bill Lee has authorized medically trained National Guard soldiers to fill nursing roles, drive ambulances and perform coronavirus testing for hospitals that are overstretched on staffing while they care for a climbing number of coronavirus patients.

The order Friday allows the adjutant general to send hospitals reinforcements from the Tennessee National Guard. The state is focusing on troops who are actively assigned, including those serving in coronavirus testing roles statewide, but not those currently serving in civilian jobs in health care.

State health officials decline to identify which hospitals have expressed interest, but say there is need statewide.

The state reports 2,485 people are currently hospitalized with COVID-19, with only 14% of floor beds and 8% of ICU beds available.

The changes will take effect for most of the area at 10 p.m. Sunday and last through Jan. 4. The counties have not yet reached Gov. Gavin Newsom’s threshold announced a day earlier requiring such an order when 85% of ICU beds at regional hospitals are full, but officials said the hospital system will be overwhelmed before the end of December when Newsom’s order would apply.

It comes the same day the state recorded another daily record number of cases, with 22,018, and hospitalizations topped 9,000 for first time.

It means restaurants will have to close to both indoor and outdoor dining, bars and wineries must close along with hair and nail salons and playgrounds. Retail stores and shopping centers can operate with just 20% customer capacity. Gatherings of any size with people outside of your household are banned.

RALEIGH, N.C. — A judge agreed to name a third-party expert to scrutinize the COVID-19 response within North Carolina’s prison system, which like the rest of the state is experiencing a surge in cases and hospitalizations.

Ruling again in ongoing litigation about health and safety within prisons, Superior Court Judge Vince Rozier said he’s worried about the pressure the coronavirus is now placing upon correctional institutions.

The prison system closed temporarily three units over the last two weeks to handle staffing challenges, brought on in part by the upward swing in positive cases and the medical care prisoners need.

The Department of Public Safety says 370 correctional staff testing positive for coronavirus were out of work Friday, up 50 workers from last week. There were 667 active cases among the roughly 30,000 prisoners statewide. Twenty-five prisoners have died from COVID-19-related illnesses since the pandemic.

ATLANTA — Georgia’s coronavirus infections are soaring above their worst peaks of the summer, resulting in more hospitalizations and more deaths.

Hitting a new single-day record of more than 6,000 suspected and confirmed infections on Friday pushed Georgia’s rolling seven-day average of infections to nearly 4,300. That average was above its previous July record for the second day in a row.

Hospitalizations have not reached their summer heights in Georgia, but beds are filling rapidly with cases. Nearly 2,400 COVID-19 patients were in the hospital Friday.

BIRMINGHAM, Ala. — Alabama health officials have urged the state to extend its statewide mask mandate, set to expire next week.

Dr. Sarah Nafziger, who teaches emergency medicine at the University of Alabama at Birmingham, said it was “critically important” for Republican Gov. Kay Ivey to maintain the requirement, which is opposed by some who consider it an infringement on personal rights or discount the threat of the coronavirus.

The order, which expires Dec. 11, requires anyone older than 6 to wear a mask when in public spaces indoors and outside if they can’t stay 6 feet away from others. First imposed in July, health officials credit the rule with a sharp decline in cases until a recent spike began nationwide.

HARRISBURG, Pa. — States faced a deadline on Friday to place orders for the coronavirus vaccine as many reported record infections, hospitalizations and deaths.

The number of Americans hospitalized with COVID-19 hit an all-time high in the U.S. on Thursday at 100,667, according to the COVID Tracking Project. That figure has more than doubled over the past month.

The Oregon Health Authority on Friday reported 2,100 new cases and 30 deaths. The previous daily records have been 1,699 cases and 24 deaths. Oregon also surpassed 80,000 cases since the start of the pandemic in March.

Housing advocates in the state are asking the Legislature to act on a proposal to extend a statewide eviction moratorium until July 1. The current eviction moratorium, which was ordered at the beginning of the pandemic, is scheduled to lapse on Dec. 31.

Kelly says the Kansas vaccine plan calls for the first shots to go to front-line health care workers with a high risk of coronavirus exposure.

She says the second phase will focus on vaccinating essential workers, including first responders but also grocery store and meatpacking plant workers.

The Democratic governor says members of the Legislature will get vaccinated at different times, based on their risk of being exposed or developing serious complications.

Next week, the Food and Drug Administration will consider whether to grant emergency authorization for vaccines made by Pfizer and Moderna.

ATLANTA — Vice President Mike Pence is trying to boost Americans’ confidence in the COVID-19 vaccines that are awaiting regulatory approval and distribution.

At the U.S. Centers for Disease Control and Prevention main campus in Atlanta, Pence said Friday the Food and Drug Administration could approve the first vaccines “the week of Dec. 14” with the first wave of Americans being vaccinated “in all 50 states” within 48 hours of that approval.

Pence said “the confidence piece is so important” so that enough Americans will take the vaccine and ensure its maximum effectiveness. Pence called on “all of us in public life” to vouch for the process that got vaccines to the cusp of mass distribution.

“We’ve gone at record pace, but we’ve cut no corners in this,” Pence said, sitting beside CDC Director Dr. Robert Redfield. “What we want to do is assure the American people that there’s been no compromise of safety or effectiveness in the development of this vaccine.”

UNITED NATIONS — The U.N. health chief says positive results from coronavirus vaccine trials are encouraging but warns against poorer nations being left behind in “the stampede for vaccines.”

Referring to the upsurge in cases and deaths: “Where science is drowned out by conspiracy theories, where solidarity is undermined by division, where sacrifice is substituted with self-interest, the virus thrives, the virus spreads.”

Tedros urged all nations to unite and build the post-pandemic world by investing in vaccines, preparedness against the next pandemic and basic public health.

Tedros says Covax, an ambitious but troubled global project to buy and deliver virus vaccines for the world’s poorest people, faces a $4.3 billion gap and needs $23.9 billion for 2021.

He says the total is less than one-half of one percent of the $11 trillion in stimulus packages announced by the Group of 20, the world’s richest countries.

The Latest: Fauci vows full US engagement with WHO