The Indian government and protesting farmers were unable to break their deadlock in talks on Saturday, with the farmers saying they will intensify their demonstrations against new agriculture laws and continue blocking key highways on the outskirts of the capital.

Protest leaders rejected the government’s offer to amend some contentious provisions of the new farm laws, which deregulate crop pricing, and stuck to the demand for total repeal.

The two sides will meet for further discussions on Wednesday. 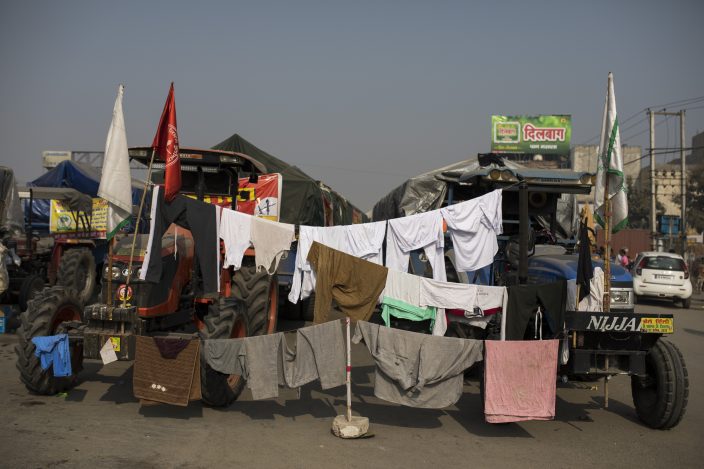 Clothes of protesting farmers hang to dry on lines attached to their tractors as they block a major highway protesting new farming laws they say will result in exploitation by corporations, eventually rendering them landless, at the Delhi-Haryana state border, India, Tuesday, Dec. 1, 2020. The busy, nonstop, arterial highways that connect most northern Indian towns to this city of 29 million people, now beat to the rhythm of never-heard-before cries of “Inquilab Zindabad” (“Long live the revolution”). Tens and thousands of farmers, with colorful distinctive turbans and long, flowing beards, have descended upon its borders where they commandeer wide swathes of roads. (AP PhotoAltaf Qadri)

Thousands of farmers are protesting reforms that they say could devastate crop prices and reduce their earnings. They have blocked highways on the outskirts of New Delhi for the last 10 days.

The farmers say the laws will lead the government to stop buying grain at minimum guaranteed prices and result in exploitation by corporations that will push down prices.

Prime Minister Narendra Modi’s government insists the reforms will benefit farmers. It says they will allow farmers to market their produce and boost production through private investment. But farmers say they were never consulted.

Saturday’s talks between Agriculture Minister Narendra Singh Tomar and 35 farmer leaders were the fifth since the laws were passed in September.

Halfway through the talks, farmer leaders held placards asking the government to answer “yes” or “no” to their demand for repealing new farm laws.

The farmers are camping along at least five major highways on the outskirts of the capital and have said they won’t leave until the government rolls back what they call the “black laws.”

The protesting farmers on Saturday also announced a nationwide strike for Tuesday. They said they would intensify their agitation and occupy toll plazas across the country on the strike day if the government didn’t abolish the laws.

Farmers have been protesting the laws for nearly two months in Punjab and Haryana states. The situation escalated last week when tens of thousands marched to New Delhi, where they clashed with police.

The laws add to already existing resentment from farmers, who often complain of being ignored by the government in their push for better crop prices, additional loan waivers and irrigation systems to guarantee water during dry spells.

With nearly 60% of the Indian population depending on agriculture for their livelihoods, the growing farmer rebellion has rattled Modi’s administration and allies.

Modi and his leaders have also tried to allay farmers’ fears about the new laws while also dismissing their concerns. Some of his party leaders have called the farmers “misguided” and “anti-national,” a label often given those who criticize Modi or his policies.

Many opposition party leaders, activists and even some allies of Modi’s party have called the laws anti-farmer and expressed support for those protesting.

No progress in talks between farmers, Indian government

Protesting Indian farmers call for 2nd strike in a week