Max Verstappen boosted Red Bull by posting the fastest time in the third and final practice session for the Sakhir Grand Prix on Saturday.

He moved up the leaderboard late in the session to finish .21 seconds ahead of Mercedes driver Valtteri Bottas and .36 clear of Bottas' temporary teammate George Russell.

Verstappen has won one race this season in a slower car than Mercedes.

Mercedes driver Valtteri Bottas of Finland steers his car during the third free practice at the Formula One Bahrain International Circuit in Sakhir, Bahrain, Saturday, Dec. 5, 2020. The Bahrain Formula One Grand Prix will take place on Sunday. (Tolga Bozoglu, Pool via AP)

Russell topped both of Friday's practice sessions in an impressive performance after stepping in as a replacement for world champion Lewis Hamilton, who is self-isolating for 10 days after contracting the coronavirus earlier this week.

Hamilton sealed his record-equaling seventh F1 title last month in Turkey in a season where he extended his record number of pole positions to 98 and broke the F1 record for GP wins.

Hamilton has 95 wins compared to 91 for seven-time F1 champion Michael Schumacher, whose son Mick is set to clinch the F2 title this weekend ahead of his move into F1 with the Haas team next season.

Mercedes driver Valtteri Bottas of Finland steers his car during the third free practice at the Formula One Bahrain International Circuit in Sakhir, Bahrain, Saturday, Dec. 5, 2020. The Bahrain Formula One Grand Prix will take place on Sunday. (Brynn Lennon, Pool via AP)

Drivers again raced at the Bahrain International Circuit in Sakhir but on a smaller outer track of 3.5 kilometers (2.2 miles) instead of 5.4 kilometers (3.3 miles) and with 87 laps rather than 54, making for a somewhat dizzying experience.

Haas driver Romain Grosjean, who escaped a horrific crash at last Sunday’s Bahrain GP with minor burns and a sprained ankle, was replaced by Pietro Fittipaldi. He is the grandson of two-time F1 champion Emerson Fittipaldi and is the fourth member of Fittipaldi to race in F1. 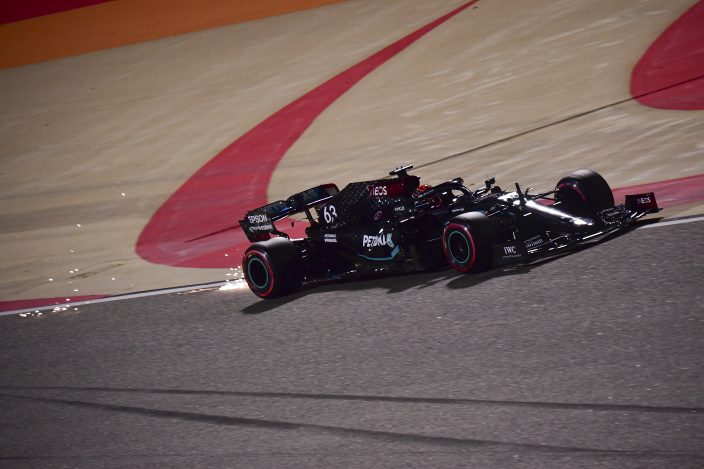 Russell gets chance to shine for Mercedes at Sakhir GP