The departing Trump administration has ended five cultural-exchange programs with China that it says were being used for Chinese propaganda and had no benefit to the United States.

The terminations follow new visa restrictions announced by Washington limiting stays in the U.S. by members of China's Communist Party and signal further erosion in relations with Beijing in the final weeks of President Donald Trump's time in office.

Secretary of State Mike Pompeo said the exchange programs he ended were fully paid for and operated by the Chinese government “as soft power propaganda tools.” They provided “carefully curated access to Chinese Communist Party officials, not to the Chinese people, who do not enjoy freedoms of speech and assembly,” he said in a statement late Friday. 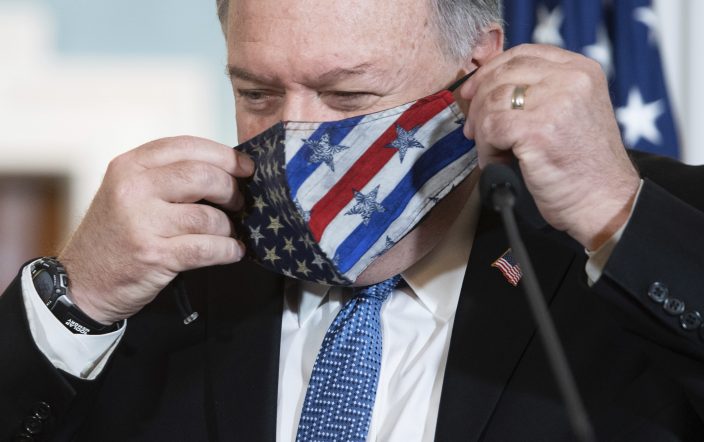 Secretary of State Mike Pompeo puts on his mask after speaking to the media prior to meeting with Kuwaiti Foreign Minister Sheikh Ahmad Nasser Al-Mohammad Al-Sabah at the State Department, Tuesday, Nov. 24, 2020 in Washington. (Saul LoebPool via AP)

Pompeo said the U.S. welcomes “the reciprocal and fair exchange of cultural programs” with China and mutually beneficial ones will continue.

This past week, the U.S. announced new time limits on visas for members of the Chinese Communist Party and their families, cutting the period their travel documents are valid to one month from 10 years.

The Trump administration has taken a variety of punitive measures against China as disputes sharpen over human rights, the coronavirus pandemic, trade, technology, Taiwan and many other issues. Trump's steps are subject to being reversed after Democrat Joe Biden becomes president on Jan. 20.

US imposes new sanction on Beijing over South China Sea

Pompeo unloads on US universities for China ties

US moves against Chinese officials over South China Sea