Ireland overcame Scotland's vigorous start and ran away a 31-16 winner in their Autumn Nations Cup playoff for third place at Lansdowne Road on Saturday.

Scotland was fourth in both tournaments, too, which was fair as the Scots were outmuscled by the Irish and lost their composure. 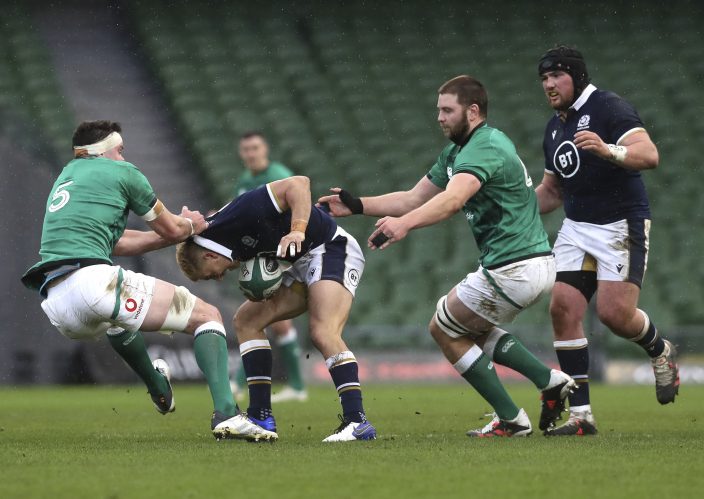 The Scots deserved their 9-3 lead after half an hour until Ireland woke up. The turning point was Scotland inside center Duncan Taylor's yellow card for saving a try by deliberately knocking down Bundee Aki’s pass.

Jonathan Sexton slotted the penalty, then waived another goalkick nearing halftime to set up a corner lineout. Ireland didn’t mess it up, and Sexton cleverly lobbed into the in-goal where Hugo Keenan jumped above Scotland's static Darcy Graham and knocked the ball back for fellow wing Keith Earls to pounce on.

The eight-point swing with the man advantage put Ireland 11-9 ahead at halftime and, more importantly, rewarded renewed confidence. 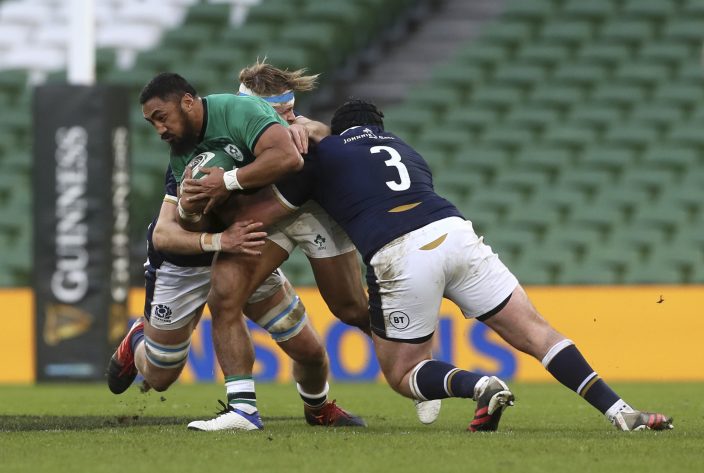 A couple of errors by Scotland captain Stuart Hogg gave Ireland good field position and, after big carries by No. 8 Caelan Doris, prop Cian Healy went over near the posts.

Ireland was in a groove and Scotland's discipline was vanishing. Another corner lineout and flanker Peter O'Mahony was the extra man to send Earls free into the left corner. Earls’ 31st try lifted him in the Ireland try-scorers list to outright second to Brian O’Driscoll's 46.

Out of the blue, Scotland got a seven-pointer when wing Duhan van der Merwe picked up ruck ball 30 meters out, broke away and rounded Jacob Stockdale. 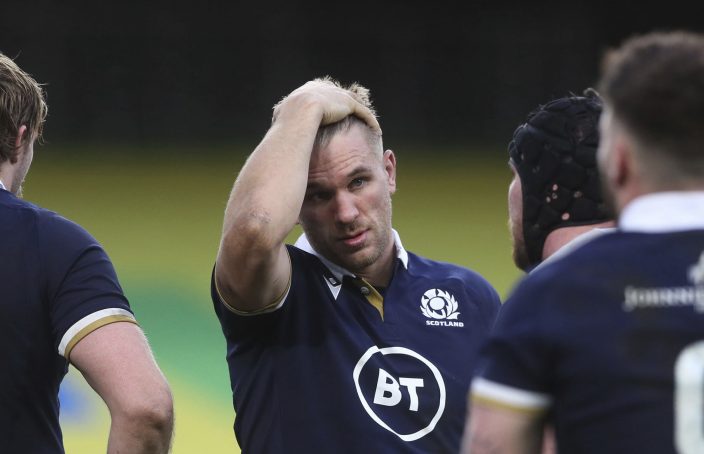 Scotland's Chris Harris reacts after conceding their first try, during the Autumn Nations Cup rugby match between Ireland and Scotland, at the Aviva Stadium, in Dublin, Ireland, Saturday, Dec. 5, 2020. (Brian LawlessPA via AP)

A left thigh injury forced Sexton off but it was another decisive return from injury by the team talisman and playmaker.

In contrast, Scotland counterpart Jaco van der Walt's debut was a pass as he hit four of five goalkicks, hit the posts with the other one, and defended his channel behind an overwhelmed pack.

A flurry of penalties -- 15 by fulltime -- conceded by Scotland gave Irish replacement flyhalf Ross Byrne a couple of penalty shots, inbetween which O’Mahony had a try disallowed for stepping over the sideline.