The prehistoric monument of Stonehenge in southern England was closed to visitors Saturday after protesters staged a “mass trespass” against the British government's road-building plans, including a new tunnel near the World Heritage Site.

The protesters, who described themselves as an alliance of local residents, ecologists, activists, archaeologists and pagans, gathered at Stonehenge around midday.

English Heritage, a national charity that manages hundreds of historic sites, soon after made the decision to close Stonehenge to visitors “due to unforeseen circumstances" and said it was against the law for anyone to enter the monument area without its consent. 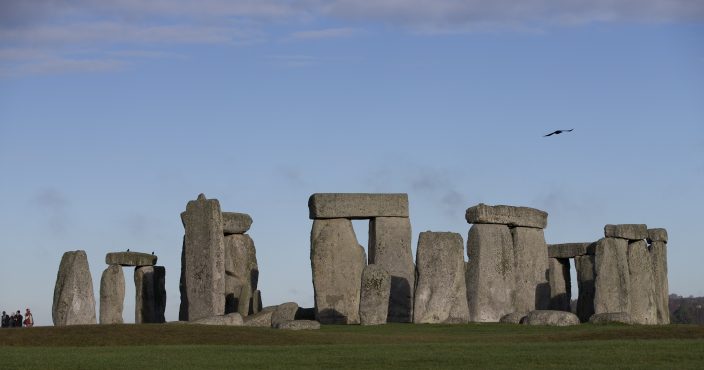 FILE - In this Tuesday, Dec. 17, 2013 file photo, visitors take photographs of the world heritage site of Stonehenge, in Wiltshire England. The prehistoric monument of Stonehenge in southern England was closed to visitors Saturday, Dec. 5, 2020, in the afternoon after protesters staged a “mass trespass” against the British government’s road-building plans, which includes a new tunnel near the World Heritage Site. The protesters, who described themselves as an alliance of local residents, ecologists, activists, archaeologists and pagans, gathered at Stonehenge around midday. (AP PhotoAlastair Grant, File)

“Whilst we respect people’s right to demonstrate peacefully, we do not condone behavior that disrupts and endangers the site and the people who visit or work here," an English Heritage spokeswoman said.

The protest comes less than a month after the government backed the 1.7 billion-pound ($2.3 billion) tunnel plan. The tunnel near Stonehenge that is intended to ease traffic along a stretch of the A3030 highway that is widely prone to gridlock.

The decision has faced vociferous opposition from local residents as well as archaeologists. Opponents, who have launched a legal action against the project, say the tunnel will damage the environment, wildlife and potential archaeological finds underground.

The protesters are also voicing their worries about the government’s broader 27 billion-pound road-building program, which they say goes against its objectives to reduce greenhouse gases.

“This is the coming together of people who are saying we have had enough," Dan Hooper, an environmental activist who is better known as Swampy. “Building more roads simply leads to more traffic and carbon."

Stonehenge, which is one of the world’s most famous prehistoric monuments, was built on the flat lands of Salisbury Plain in stages, starting 5,000 years ago, with the unique stone circle erected in the late Neolithic period about 2,500 B.C.

The site’s meaning has been a subject of vigorous debate, some more seemingly outlandish than others. English Heritage notes several explanations over the centuries - from Stonehenge being a coronation place for Danish kings or a Druid temple to a cult center for healing or an astronomical computer for predicting eclipses and solar events.

The charity said the interpretation “most generally accepted is that of a prehistoric temple aligned with the movements of the sun.”