A Russian pipe-laying ship sailed into position Saturday to resume construction of a German-Russian gas pipeline in the Baltic Sea that the United States has vehemently opposed.

The Akademik Cherskiy vessel reached the area off the coast of Poland where a section of the Nord Stream 2 pipeline remains uncompleted, according to ship monitoring data. Another Russian pipe-laying ship, Fortuna, sailed off from the German port of Wismar, apparently heading to a different location where another pipeline section is to be built.

The maneuvers followed Russia pledging to complete the pipeline despite the threat of U.S. sanctions. 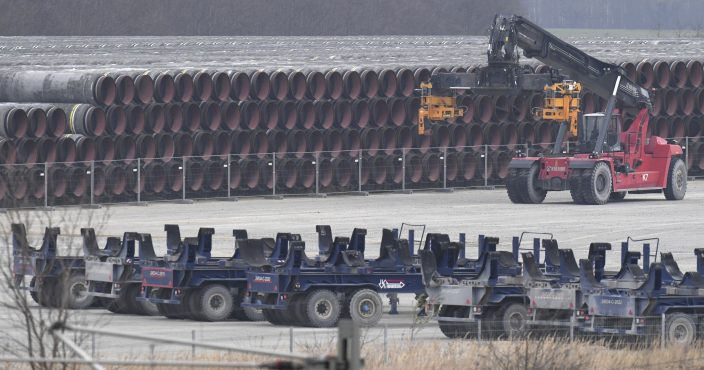 Pipes for the Nord Stream 2 Baltic Sea gas pipeline are stored on the premises of the port of Mukran near Sassnitz, Germany, Friday, Dec. 4, 2020. The port of Mukran on the island of Ruegen is considered the most important transhipment point for the construction of the pipeline. (Stefan Sauerdpa via AP)

Russia's state-controlled natural gas company Gazprom has moved to finish construction of the multibillion Baltic Sea pipeline with its own resources after a Swiss company doing the building work at sea opted out of the project a year ago under the threat of U.S. sanctions.

Gazprom had to send the Akademik Cherskiy on a long voyage from the port of Nakhodka on Russia's Pacific coast to the Baltics. The vessel has been moving between various Baltic ports since May as the Nord Stream 2 construction plans were thrown into uncertainty by the sanctions threat.

The U.S. has argued that the Nord Stream 2 would erode European energy security at a time when Russia-West relations have sank to post-Cold War lows due to crises such as Moscow's 2014 annexation of Ukraine's Crimea.

The Kremlin has countered by accusing Washington of trying to derail the project in a bid to force European customers to purchase U.S. liquefied natural gas instead of the cheaper Russian natural gas.

Several states are loosening their ...