TCU quarterback Max Duggan threw a go-ahead, 71-yard touchdown pass midway through the fourth quarter and ran for two more scores as the Horned Frogs held off No. 19 Oklahoma State 29-22 on Saturday.

Derius Davis caught the long TD pass in stride near the 25 with 7:56 left to give the Horned Frogs the lead. 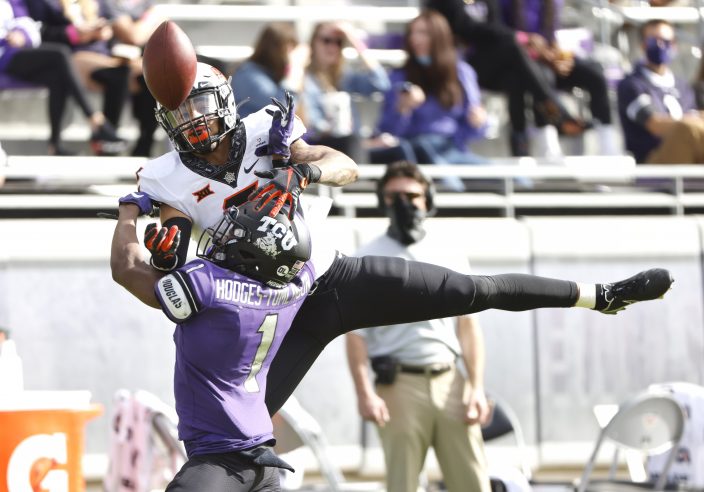 “I felt like Max was getting pressured, so I was about to come back toward the ball but I saw him throw it,” Davis said. “So I just turned around and ran as fast as I could and there was the ball.”

TCU, which overcame five turnovers, stayed in front when Trevon Moehrig made a one-handed interception of a deflected pass in the end zone, and TCU had a fourth-down stop with 2:18 left after its last turnover.

“We’ve just been getting better every week,” TCU coach Gary Patterson said. “You got to have a little luck and make a couple of plays.” 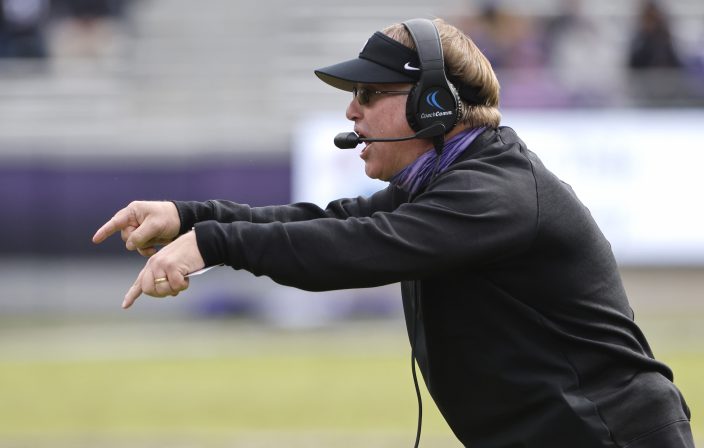 TCU head coach Gary Patterson gestures to his team as TCU plays Oklahoma State during the first half of an NCAA college football game Saturday, Dec. 5, 2020, in Fort Worth, Texas. (AP PhotoRon Jenkins)

Oklahoma State (6-3, 5-3), with a makeup game remaining at Baylor, wasn't necessarily eliminated from making the Big 12 championship game in two weeks, but would need a lot of help to get there.

“Sometimes goals fall out of reach, and you've just got to keep working,” said Cowboys defensive end Brock Martin, who returned a fumble 42 yards for a touchdown.

The Cowboys were trying to respond with a tying touchdown when Spencer Sanders' high pass deflected off the hands of 6-foot-7 Jelani Woods, and was grabbed by Moehrig in the back of the end zone. 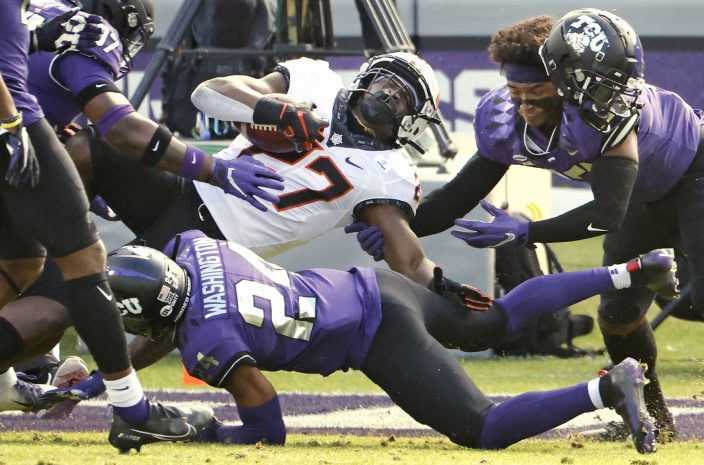 Oklahoma State running back Dezmon Jackson (27) is stopped short of the goal line by TCU defenders Ar'Darius Washington (24) and Dee Winters (13) during the first half of an NCAA college football game Saturday, Dec. 5, 2020, in Fort Worth, Texas. (AP PhotoRon Jenkins)

Duggan then fumbled when Amen Ogbongbemiga stripped the ball from him at the TCU 26. But Sanders was under extreme pressure and threw an incompletion on fourth down.

Oklahoma State still had another shot after TCU failed to get a first down to run out the clock, but Sanders' desperation pass on the final play of the game fell incomplete in a crowd near the goal line.

Tylan Wallace, the Oklahoma State senior playing in his hometown, had a 55-yard TD catch at the end of the third quarter to put the Cowboys up 22-21. He finished with seven catches for 92 yards. 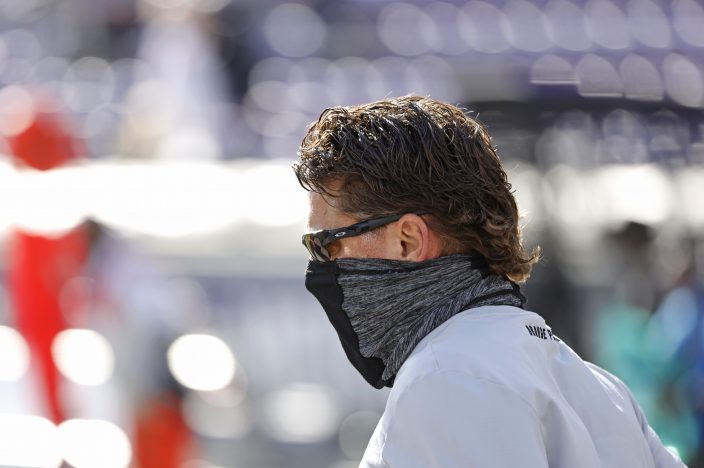 Duggan was only 12-of-26 passing, but the Frogs still had two 100-yard receivers. Davis finished with six catches for 139 yards while Quentin Johnson had three catches for 114 yards.

After a 1-yard TD keeper in the first half, Duggan got his second rushing score when he faked a handoff and went 42 yards on a fourth-and-1 play, shedding a defender near the 25 on the opening drove of the second half. 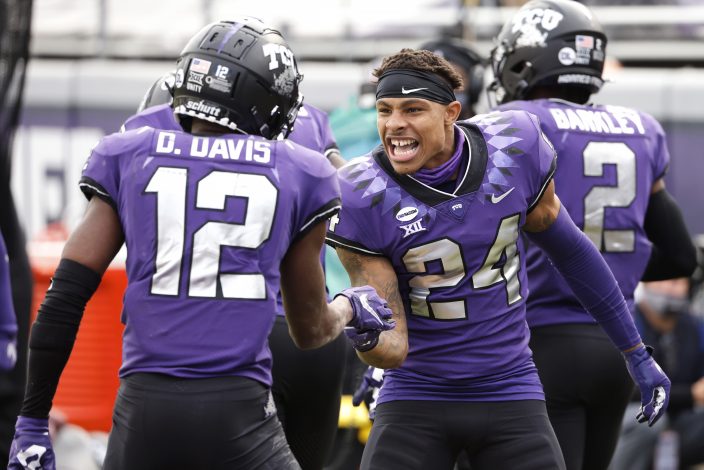 “We’re playing really good defense, but we’re giving up two or three big plays each game, which is allowing them to score points on us,” Oklahoma State coach Mike Gundy said. “So we’ve got to work hard and try to minimize big plays.”

Oklahoma State: The Cowboys jumped out to a 13-0 lead, including defensive end Brock Martin's 42-yard fumble recovery for a touchdown for the game's first score. JUCO transfer running back Dezmon Jackson ran for 118 yards on 29 carries in his second start in a row for injured backs Chuba Hubbard and LD Brown. Jackson ran 36 times for Big 12-high 235 yards and three touchdowns against Texas Tech last week. 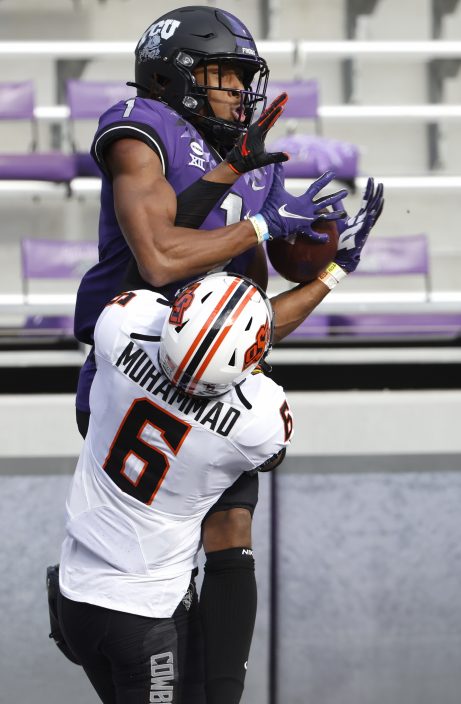 TCU wide receiver Quentin Johnston (1) catches a pass over Oklahoma State cornerback Jabbar Muhammad (6) in the end zone for a two-point conversion during the second half of an NCAA college football game Saturday, Dec. 5, 2020, in Fort Worth, Texas. (AP PhotoRon Jenkins)

TCU: After starting this season 1-3, the Horned Frogs finished with a winning record in Big 12 play in Patterson’s 20th season. The final stretch by the defense to preserve the victory was just the kind of effort the defensive-minded coach likes to see. TCU had fumbles and Duggan threw an interception.

TCU finishes its regular season with next Saturday night against Louisiana Tech, a non-conference home game added just this week.

Lauri Markkanen had 29 points and ...

Mexico says it's OK with getting less Pfizer vacci ...