More than 300 people were detained in the Belarusian capital on Sunday, where crowds of people took to the streets for the 18th consecutive weekend, demanding the ouster of the country's authoritarian leader who won a sixth term in office in an election widely seen as rigged.

Thousands of people Sunday took part in dozens of small rallies scattered all over Minsk, the Belarusian capital — a new tactic the opposition employed instead of one large gathering to make it harder for the security forces to target the protesters.

“We believe! We can! We will win!” the demonstrators chanted. Several people wore Santa Claus costumes and masks depicting President Alexander Lukashenko. “Give Belarusians a gift: go away,” a banner they carried read. 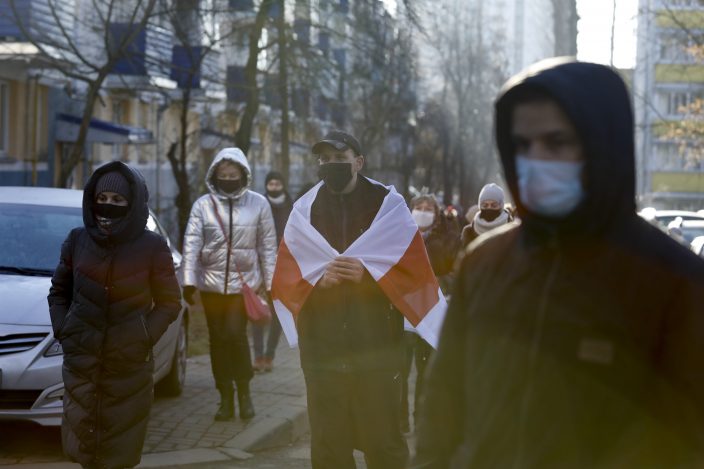 Demonstrators wearing face masks to help curb the spread of the coronavirus, one of them wearing an old Belarusian national flag over his shoulders, during an opposition rally to protest the official presidential election results in Minsk, Belarus, Sunday, Dec. 6, 2020. Protests in Belarus have continued for almost four months after President Alexander Lukashenko won his sixth term in office in an election the opposition says was rigged. (AP Photo)

Police in Minsk said they detained more than 300 people. The Viasna human rights group released the names of 189 people detained in Minsk and other cities, where rallies also took place.

Mass protests have rocked Belarus, a former Soviet republic in eastern Europe, since official results from the Aug. 9 presidential election gave Lukashenko a landslide victory over his widely popular opponent, Sviatlana Tsikhanouskaya. She and her supporters refused to recognize the result, saying the vote was riddled with fraud.

Authorities have cracked down hard on the largely peaceful demonstrations, the biggest of which attracted up to 200,000 people. Police used stun grenades, tear gas and truncheons to disperse the rallies. 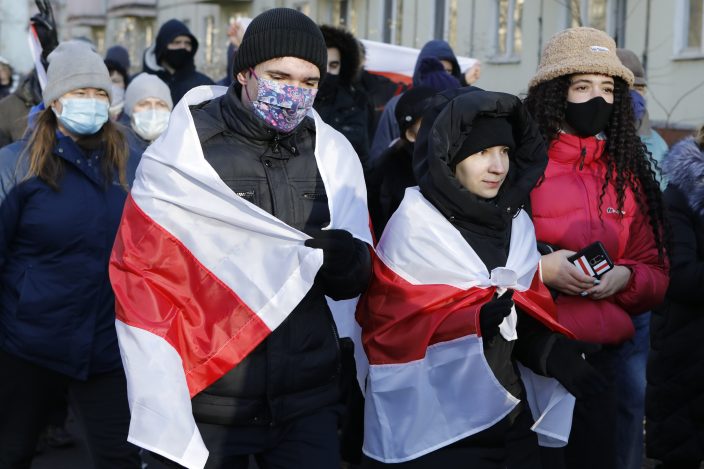 Young demonstrators wearing face masks to help curb the spread of the coronavirus, some of them wearing old Belarusian national flags over their shoulders, during an opposition rally to protest the official presidential election results in Minsk, Belarus, Sunday, Dec. 6, 2020. Protests in Belarus have continued for almost four months after President Alexander Lukashenko won his sixth term in office in an election the opposition says was rigged. (AP Photo)

On Sunday, water cannons, armored vehicles and military trucks were seen in the center of Minsk. Several subway stations were closed and internet access was restricted.

At least four journalists have been detained in Minsk and the western city of Grodno, according the Belarusian Association of Journalists. Nina Bahinskaya, a 73-year-old protester famous for her resilience, was also among those detained.

The continued crackdown on the protests elicited international outrage. Earlier this year, the European Union imposed sanctions on Lukashenko and several dozen officials over their role in the security crackdown launched after the contested election.

On Friday, the U.N. High Commissioner for Human Rights Michelle Bachelet said in a statement that the situation with human rights in Belarus is getting worse. Bachelet pointed to reports of mass arrests, the beating of detainees and the use of force in dispersing peaceful demonstrations.

“It is urgent that the government of Belarus puts an end to ongoing human rights violations,” Bachelet said, urging Belarusian authorities to release those who have been unlawfully detained during protests, stop clamping down on the demonstrations and investigate “all allegations of torture and other human rights violations, including the deaths of at least four persons in the context of the protests.”

Protesters in the meantime say they aren't discouraged by the crackdown.

"The protest will not fade down until Lukashenko leaves,” Maksim Borovets, one of those rallying in Minsk on Sunday, told The Associated Press. “The intensified repressions did not stop (it). They merely changed the forms of the fight.”