It’s been dubbed “V-Day” in Britain -- recalling the D-Day landings in France that marked the start of the final push in World War II to defeat Nazi Germany.

A week after the U.K. became the first Western country to authorize widespread use of a vaccine against COVID-19, it is preparing to administer its first shots on Tuesday in its war on the virus.

Those 800,000 doses will first go to people over 80 who are either hospitalized or already have outpatient appointments scheduled, along with nursing home workers. 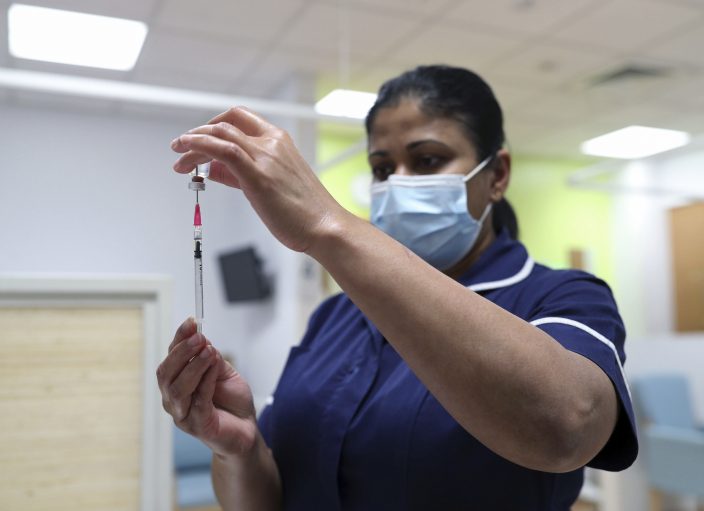 A nurse at the Royal Free Hospital, simulates the administration of the Pfizer vaccine to support staff training ahead of the rollout, in London, Friday Dec. 4, 2020. (Yui MokPool Photo via AP)

In other words, the National Health Service is saying to the waiting public, in effect: Don't call us, we'll call you. Only those who have been contacted by the NHS to arrange an appointment will be getting the jab.

Most people will have to wait until next year before there is enough vaccine on hand to expand the program.

“I don’t think people should expect anything over the next few days because the reality is … that for the vast, vast, vast majority of people this will be done in January, February, March,″ said Chris Hopson, chief executive of NHS Providers. “And the one thing that we don’t want people to get anxious about or concerned about is ‘Where’s my letter?’ in December.” 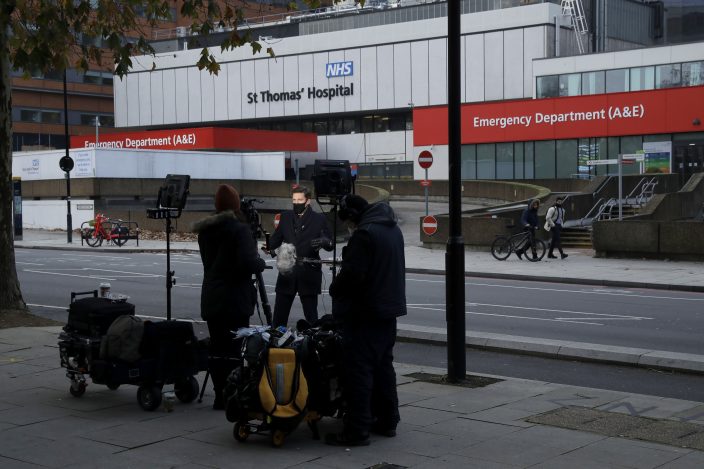 A broadcast news crew reports from outside St Thomas' Hospital in London, which starting this week is going to become one of the hubs for vaccinating people in Britain against coronavirus, Monday, Dec. 7, 2020. Shipments of the coronavirus vaccine developed by American drugmaker Pfizer and Germany's BioNTech were delivered Sunday in the U.K. in super-cold containers, two days before it goes public in an immunization program that is being closely watched around the world. (AP PhotoMatt Dunham)

Public health officials around the globe are watching Britain’s rollout as they prepare for the unprecedented task of rapidly vaccinating billions of people to end the pandemic that has killed more than 1.5 million worldwide. While the U.K. has a well-developed infrastructure for delivering vaccines, it is geared to vaccinating groups such as school children or pregnant women, not the entire population.

The U.K. is getting a head start on the project after British regulators on Dec. 2 gave emergency authorization to the vaccine produced by U.S. drugmaker Pfizer and Germany’s BioNTech. U.S. and European Union authorities are also reviewing the vaccine, alongside rival products developed by U.S. biotechnology company Moderna, and a collaboration between Oxford University and drugmaker AstraZeneca.

On Saturday, Russia began vaccinating thousands of doctors, teachers and others at dozens of centers in Moscow with its Sputnik V vaccine. That program is being viewed differently because Russia authorized use of Sputnik V last summer after it was tested in only a few dozen people. 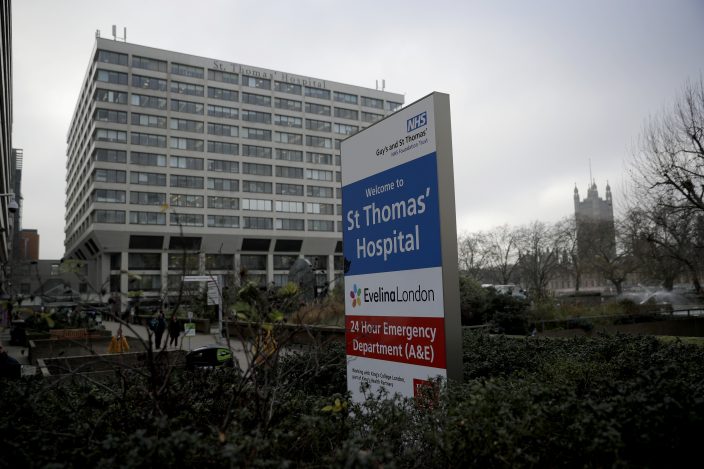 A welcome sign is displayed outside St Thomas' Hospital, with the Houses of Parliament in the background at right, in London, which starting this week is going to be one of the hubs for vaccinating people in Britain against coronavirus, Monday, Dec. 7, 2020. Shipments of the coronavirus vaccine developed by American drugmaker Pfizer and Germany's BioNTech were delivered Sunday in the U.K. in super-cold containers, two days before it goes public in an immunization program that is being closely watched around the world. (AP PhotoMatt Dunham)

But the vaccine can't arrive soon enough for the U.K., which has more than 61,000 COVID-19 related deaths — more than any other country has reported in Europe. The U.K. has more than 1.7 million cases.

The first shipments of the Pfizer-BioNTech vaccine were delivered to a selected group of U.K. hospitals on Sunday.

The 800,000 doses are only a fraction of what is needed. The government is targeting more than 25 million people, or about 40% of the population, in the first phase of its vaccination program, which gives first priority to those who are at the highest risk from the disease. 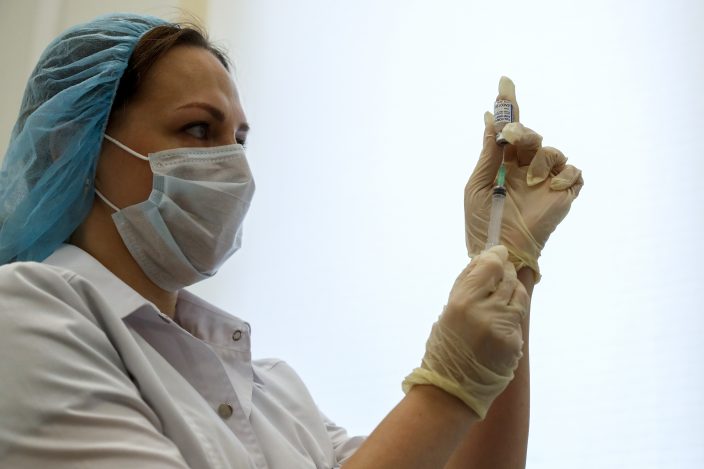 A Russian medical worker prepares a shot of Russia's Sputnik V coronavirus vaccine in Moscow, Russia, Saturday, Dec. 5, 2020. Thousands of doctors, teachers and others in high-risk groups have signed up for COVID-19 vaccinations in Moscow starting Saturday, a precursor to a sweeping Russia-wide immunization effort. (AP PhotoPavel Golovkin)

After those over 80 and nursing home workers, the program will be expanded as the supply increases, with the vaccine offered roughly on the basis of age groups, starting with the oldest people.

In England, the vaccine will be delivered at 50 hospital hubs in the first wave of the program, with more hospitals expected to offer it as the rollout ramps up. Northern Ireland, Scotland and Wales are making their own plans under the U.K.’s system of devolved administration.

Logistical issues are slowing the rapid rollout of the Pfizer vaccine because this effort will be a cold war: The vaccine has to be stored at minus-70 degrees Celsius (minus-94 degrees Fahrenheit). 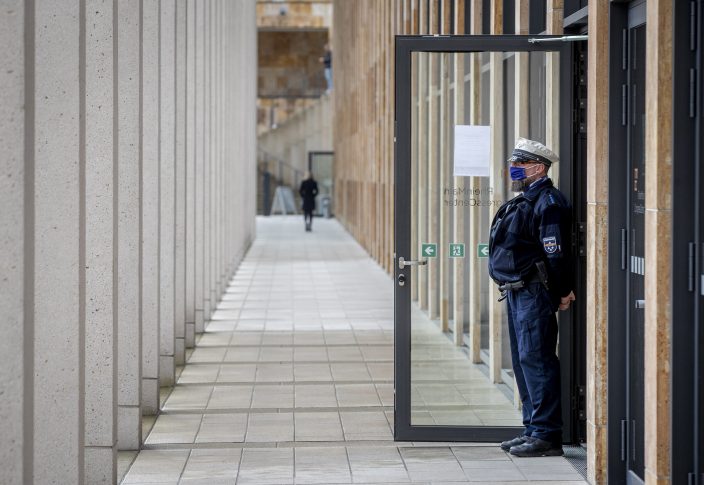 A police officer guards the entrance of a vaccine center that was introduced to the media in Wiesbaden, Germany, Monday, Dec. 7, 2020. The vaccine center will start its business as soon as the vaccine will be delivered. (AP PhotoMichael Probst)

The immunization program will be a “marathon not a sprint,” said professor Stephen Powis, medical director for NHS England.

Authorities also are focusing on large-scale distribution points because each package of vaccine contains 975 doses, and they don’t want any to be wasted.

The U.K. has agreed to purchase millions of doses from seven different producers. Governments around the world are making agreements with multiple developers to ensure they lock in delivery of the products that are ultimately approved for widespread use. 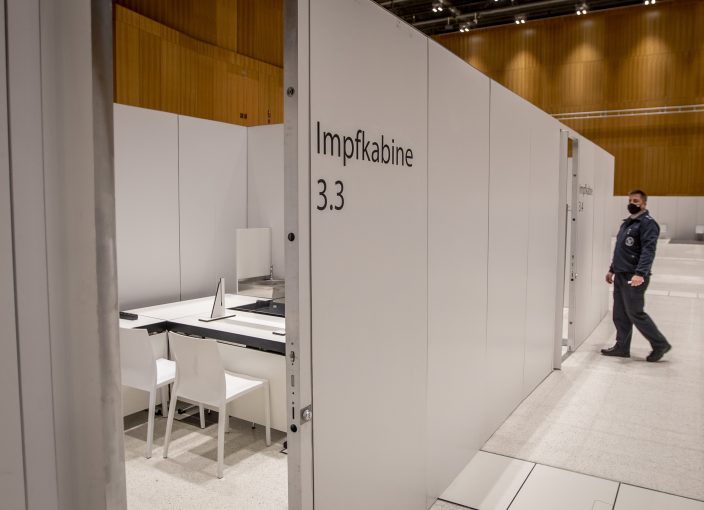 Cabins of a vaccine center that was introduced to the media are seen in Wiesbaden, Germany, Monday, Dec. 7, 2020. The vaccine center will start its business as soon as the vaccine will be delivered. (AP PhotoMichael Probst)

Dozens of armed forces personnel are assisting in building vaccination centers in the U.K. in preparation for what Health Secretary Matt Hancock has dubbed “V-Day.”

His reference harked back to Britain's World War II effort and Winston Churchill's patriotic appeals, such as his “V for Victory” hand gesture.

Hancock even used some Churchill-style rhetoric after last week's vaccine approval, saying, “This is a day to remember, frankly, in a year to forget.”

As both summer and the scheduling ...

Henley has happy return to Torrey and takes early Open ...

Russell Henley's visit to the roug ...

William urges public to follow queen's example and get jab

UK defends vaccine decision amid criticism it moved too fast

Who, when and how? A look at the UK's vaccination rollout

With hope high for vaccine, Britain prepares to roll it out