Hall of Famer Randy Moss splashed on the scene in 1998 for the Minnesota Vikings with one of the best seasons ever for a rookie receiver, setting a new standard for how rookies would be compared.

Minnesota has a rookie receiver living up to the comparisons.

Justin Jefferson surpassed 1,000 yards receiving on a 20-yard touchdown reception in Sunday’s 27-24 overtime win against Jacksonville and now has 1,039 yards on 61 receptions with seven touchdowns. 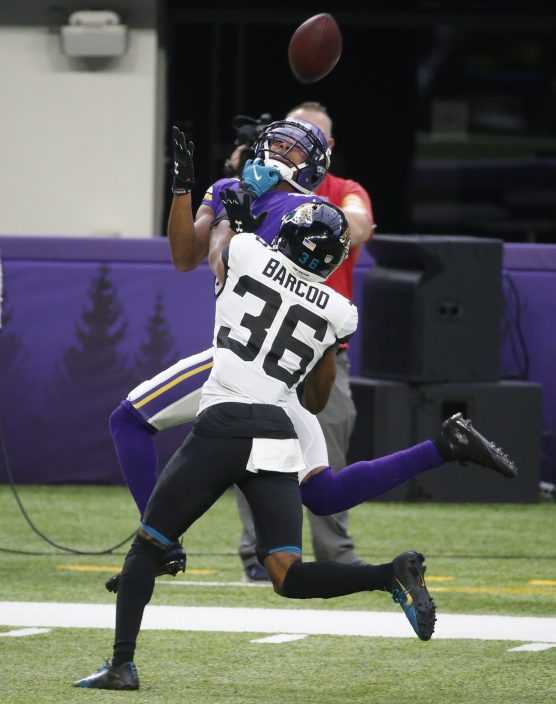 The No. 22 overall draft pick out of LSU, Jefferson didn’t even start until Week 3. After an 0-2 start, Minnesota (6-6) finally unleashed the rookie. He went for 175 yards and a touchdown in his first career start and has given the offense the deep threat it needed.

Jefferson has the fourth-most receiving yards for a rookie through the first 12 games of a season and the most since Houston’s Bill Groman had 1,222 in 1960. Odell Beckham Jr. finished with 1,305 yards in 12 games in 2014, setting the mark for receiving yards per game as a rookie with 108.8 after missing the first four games.

Another name Jefferson passed along the way: Moss, who previously held the team record with 1,014 receiving yards in his first 12 games in 1998.

Jefferson likely won’t match the record 17 touchdowns Moss had as a rookie, but he’s on pace to pass Moss’ team record of 1,313 yards in 1998. Jefferson is only eight receptions away from Moss’ Vikings record of 69 as a rookie.

Jefferson’s pace of 1,385 yards this season would be the most by any Minnesota player since Moss had 1,632 receiving yards in 2003.

“He’s just hard to cover,” Vikings coach Mike Zimmer said after Sunday’s game. “He’s a guy that has great acceleration off the line, attacks the ball really, really well. He still makes a lot of rookie mistakes, but once we get that out of him it’ll help the rest of us as well, too, because he had a few things today, too.”

Sunday marked Jefferson’s fifth game with 100 yards receiving, the most in a single season for a Minnesota rookie and passing Moss for another team record.

The Vikings took a chance trading Stefon Diggs to Buffalo for a first-round pick. They used the pick to draft Jefferson and haven’t been disappointed.

“I’m so grateful that we drafted him. I’m so grateful that we have him,” quarterback Kirk Cousins said. “In addition to being such a capable receiver, he has a great demeanor about him during the game. He doesn’t get high or low, just kind of stays the course. … there’s a lot of football up ahead of him, and I think our fan base should be excited about what he’ll be able to do, hopefully for a long time.”

Rookies are making an impact on defense, as well. The much-maligned secondary has had its share of growing pains but is coming along as rookies Cameron Dantzler and Jeff Gladney get more experience.

Dantzler had the first interception for a Minnesota cornerback this season and safety Harrison Smith added another in overtime to set up the winning field goal.

“I think you could point there to Kris Boyd played that route well, which allowed me to not feel much stress,” Smith said Monday. “So, I think when everybody does their job it makes everybody’s job that much — not easy — but it doesn’t make it quite as hard. So, when you’re clicking like that, that’s when big plays start coming around. It’s never an individual effort, it’s always the whole group playing off one another.”

Dalvin Cook is second in the league with 1,250 yards rushing, but teams are loading up to try to slow the Vikings’ rushing attack. Zimmer noted Monday that the team is seeing more run blitzing from opponents to help set the edge and keep Cook from getting outside with his speed.

Cook is averaging 5.0 yards per carry but has his three lowest single-game, per-carry averages over the past four games. He’s been held under 4.0 yards per carry in each of those three games. Cook did run eight straight times for 30 yards to set up the winning field goal.

Dantzler, a third-round draft pick, had his best game on Sunday with his first career interception, forced fumble, and fumble recovery. According to Pro Football Focus, Dantzler played 47 coverage snaps and was targeted seven times. He allowed only one catch for 7 yards.

Kicker Dan Bailey had missed one point-after attempt all season before missing two on Sunday. He also missed a 51-yard field-goal attempt — his third miss of the season — with 18 seconds left that would have given Minnesota the victory in regulation.

Linebacker Eric Kendricks was active, but was held out after aggravating a calf injury during pregame warmups. Gladney hurt his calf late in the game. Minnesota was also without tight end Irv Smith Jr. (back), running back Alexander Mattison (reported appendectomy) and rookie defensive end D.J. Wonnum (ankle/back).

10 — The number of receptions by Jaguars tight ends on Sunday with Kendricks held out of the game. Tyler Eifert and James O’Shaughnessy combined for 10 catches for 86 yards.

The easier part of the schedule is over for the Vikings, who just finished three straight home games against teams with losing records to help the playoff push. Minnesota lost to Dallas but came back with narrow victories against Carolina and Jacksonville. Up next is a trip to Tampa to face the 7-5 Buccaneers.