The New Orleans Saints have played well enough lately to withstand not only the absence of record-setting quarterback Drew Brees, but even the types of mistakes that might cost a lesser team a game.

On Sunday in Atlanta, the Saints missed a field goal, had a dropped pass on a fourth-down conversion attempt and lost a fumble that squandered a drive to the Atlanta 5 in the fourth quarter.

Yet the Saints, now playoff bound for a fourth straight season, managed to narrowly overcome those plays for their ninth straight victory. 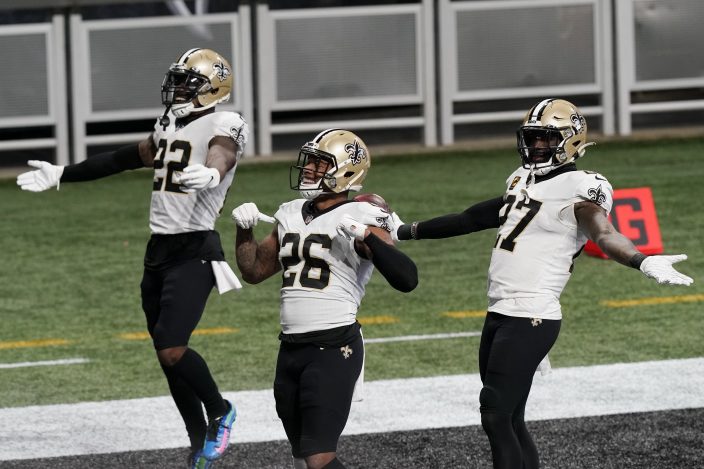 New Orleans Saints players celebrate during the second half of an NFL football game against the Atlanta Falcons, Sunday, Dec. 6, 2020, in Atlanta. (AP PhotoBrynn Anderson)

“This program, and what we've been doing here and what our goals are, we're looking for more than just clinching a playoff spot," Saints right tackle Ryan Ramczyk said Monday. “We still want a lot more.”

And during their streak, the Saints have demonstrated the depth, talent and resilience to make a deep playoff run.

Quarterback Taysom Hill has won all three starts since the Saints placed Brees on injured reserve with fractured ribs and a punctured lung. And Hill finally threw his first career touchdown passes. His first went to a wide-open Tre'Quan Smith. But the second required more timing, accuracy and zip; tight end Jared Cook caught it as two defenders converged in the end zone. 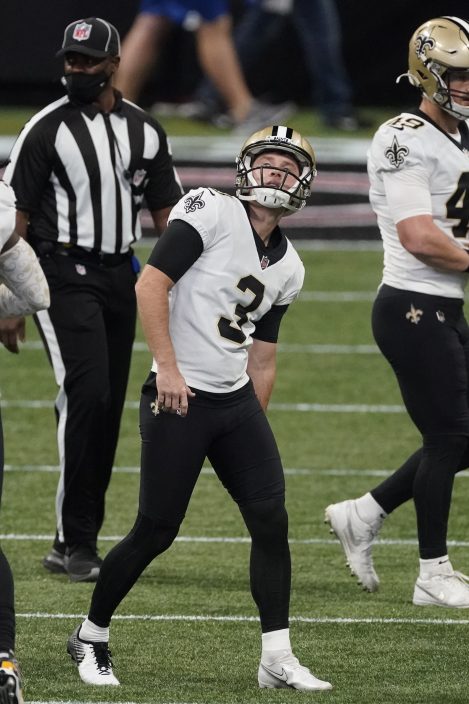 New Orleans Saints kicker Wil Lutz (3) walks off tghe field after missing a field goal against the Atlanta Falcons during the first half of an NFL football game, Sunday, Dec. 6, 2020, in Atlanta. (AP PhotoJohn Bazemore)

“I’ve just seen a guy come in and handle his situation very well," Saints receiver Michael Thomas said of Hill. “He’s improved week in and week out. He’s getting more comfortable, obviously. You can see that.”

Meanwhile, the Saints continued to get production in the running game with 207 yards and New Orleans prolonged its run of strong defensive play. The Saints defense gave up just their second touchdown in five games, limited Atlanta to 70 yards rushing, sacked Matt Ryan three times and broke up two passes in the end zone — one on fourth down and the other as time expired — that could have given the Falcons a late lead.

“We’re a very energetic group. We like to play with tons and tons of swag," linebacker Demario Davis said. "And we have a group of guys that get excited for the other guys that are making plays. And so, it’s just a great brotherhood to be a part of and we’re flowing right now. We’ve just got to keep it going.” 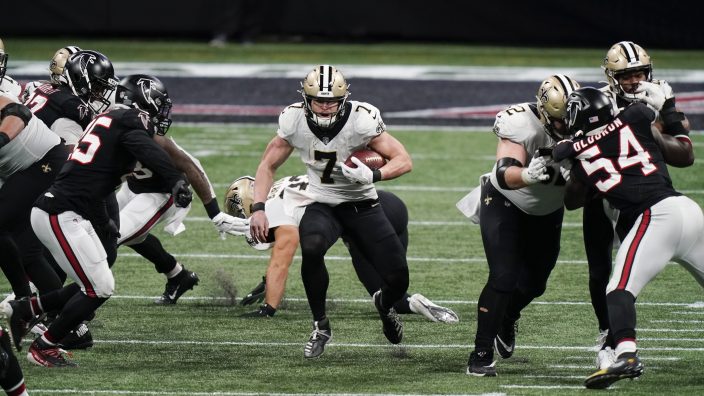 The running game has become a three-headed monster featuring the shifty Alvin Kamara, bruising Latavius Murray and quick, rugged Hill. They’ve combined to help the Saints eclipse 200 yards rushing in each of the past two weeks. 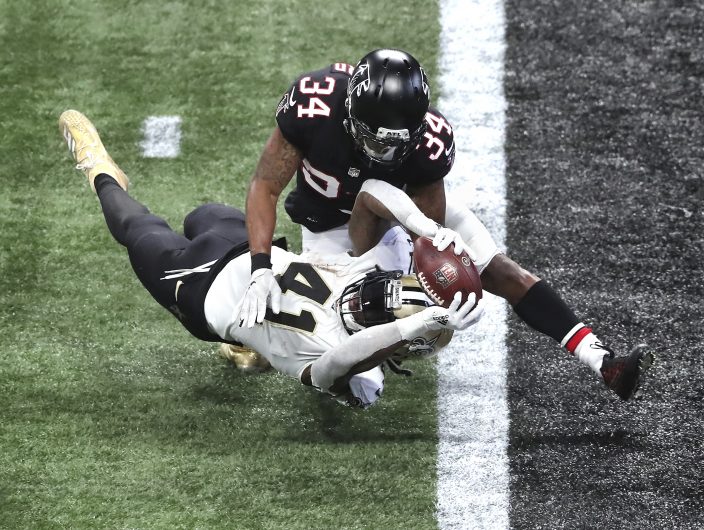 New Orleans Saints running back Alvin Kamara dives into the endzone past Atlanta Falcons cornerback Darqueze Dennard for a touchdown during the second half of an NFL football game on Sunday, Dec. 6, 2020, in Atlanta. (Curtis ComptonAtlanta Journal-Constitution via AP)

Maybe the kicking game if Wil Lutz struggles to recover from an off day that saw him miss his only field-goal attempt when his plant foot slipped, causing the normally reliable kicker apparent discomfort in his left leg. While he remained in the game after initially consulting with team training staff, the Saints subsequently decided against trying a 53-yard field goal and kept the offense on the field on fourth-and-7. However, Lutz did return for two successful extra points and two kickoffs that he booted into the end zone for touchbacks.

Lately, Thomas seems to be regaining the form that made him the 2019 AP Offensive Player of the Year. Largely because he missed six games with ankle and hamstring injuries (along with a one-game benching over behavior at practice), Thomas had just 10 catches through New Orleans’ first nine games. On Sunday in Atlanta, he had nine catches for 105 yards, marking the second time in New Orleans’ past three games that Thomas has had nine receptions for more than 100 yards. 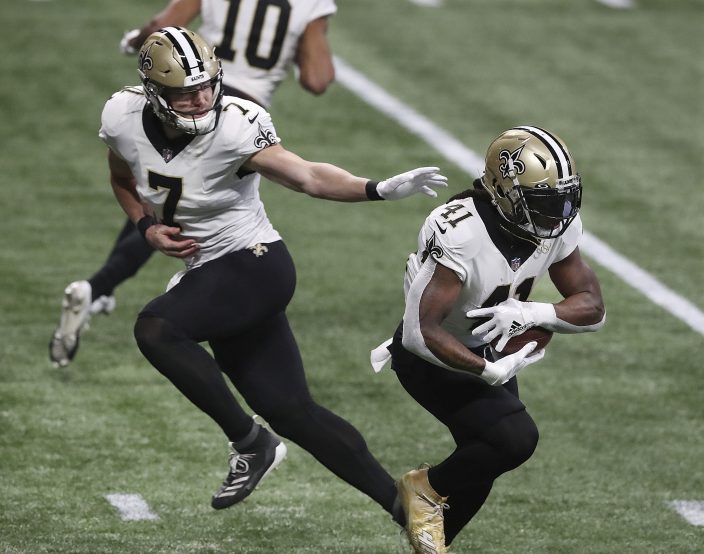 New Orleans Saints quarterback Taysom Hill hands off to running back Alvin Kamara during the first quarter of an NFL football game against the Atlanta Falcons, Sunday, Dec. 6, 2020, in Atlanta. (Curtis ComptonAtlanta Journal-Constitution via AP)

“He’s still trying to get to 100%,” Payton said. “He’s come up with some big plays here. And for a quarterback, new in the lineup, you know, to have that target in someone who is going to come down with the ball, make plays, that’s a big deal.”

Rookie interior offensive lineman Cesar Ruiz, the club’s 2020 first-rounder, he was removed from the starting lineup in favor of veteran Nick Easton. The move was precipitated in part by the return of left guard Andrus Peat from a concussion. Easton went to right guard and Ruiz to the sideline. 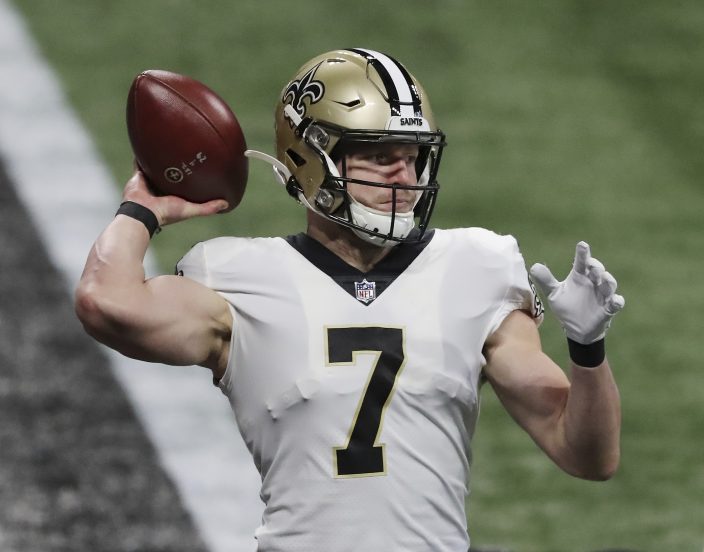 New Orleans Saints quarterback Taysom Hill prepares to complete a pass against the Atlanta Falcons during the first quarter of an NFL football game Sunday, Dec. 6, 2020, in Atlanta. (Curtis ComptonAtlanta Journal-Constitution via AP)

Cornerback Patrick Robinson left Sunday’s game with a leg injury and there has been no update on his condition. The Saints will have to keep an eye on Lutz's (non-kicking) left leg. Meanwhile, Brees is eligible to come off injured reserve this week after missing three games, but whether he will remains unclear.

“I honestly wouldn’t be able to give you a time frame,” Payton said. “He’s like a handful of the other guys that are down there working their tails off to get back healthy.”

200.7 — The Saints’ average yards rushing during the past three games without Brees in the lineup.

The Saints try to retain their perch atop the NFC when they visit struggling Philadelphia on Sunday, then return home for a potential Super Bowl preview against the Kansas City Chiefs.