The number in the loss column is at “one.” The number of issues the Pittsburgh Steelers are facing after their first setback of the season is considerably higher.

The shortcomings masked by timely turnovers and just enough offensive splash during Pittsburgh's 11-0 start were on full display during a stunning 23-17 upset at the hands of Washington on Monday night.

The offensive line, missing center Maurkice Pouncey for a second straight game because of COVID-19 protocols, was pushed around by Washington's younger, more athletic front. The running game, minus James Conner, who like Pouncey sat out due to COVID-19, generated a whopping 1.67 yards per carry and went 0-fer in three shots from the Washington 1 in the second quarter before being abandoned almost completely. 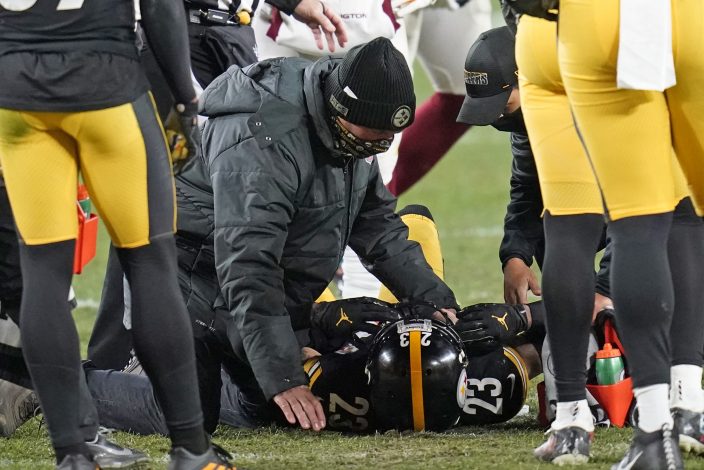 Pittsburgh Steelers cornerback Joe Haden (23) is helped by team doctors during the second half of an NFL football game against the Washington Football Team, Monday, Dec. 7, 2020, in Pittsburgh. (AP PhotoKeith Srakocic)

Facing fourth-and-1 at the Washington 25 with the game tied in the fourth quarter, Pittsburgh eschewed a run and instead had quarterback Ben Roethlisberger send an ill-fated lob down the sideline to rookie running back Anthony McFarland Jr. that fell incomplete.

“I live by a coaching creed ‘If you can’t get a yard, you don’t deserve to win’ and that was the case for us in this game," coach Mike Tomlin said Tuesday.

It's been that way lately. Pittsburgh's 21 yards rushing marked the franchise's third-lowest total since 1970. While Tomlin has stressed repeatedly the Steelers don't need to grind it out to win — not with Roethlisberger having a remarkable comeback season after missing most of 2019 with a right elbow injury — the inability to produce any sort of consistent offensive balance has taken its toll. 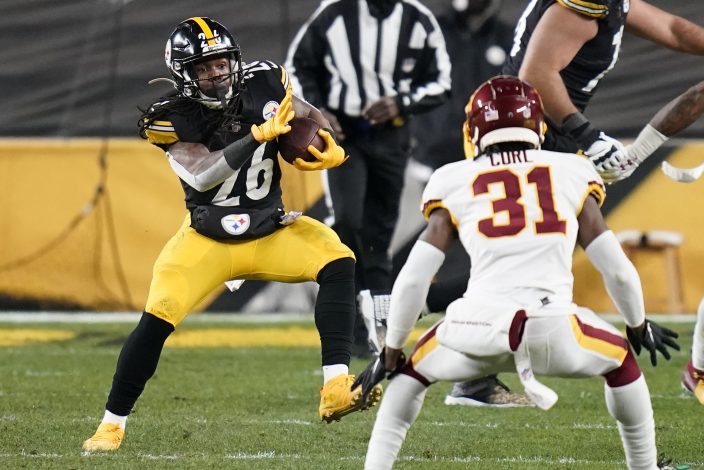 And while Tomlin is aware of how short-handed his offense is without two of its key cogs, he also doesn't care.

“That (ticks) me off because we’ve got to be the type of group that endures regardless of who is available,” he said.

Tomlin is optimistic both Pouncey and Conner will be available next Sunday against Buffalo (9-3). Yet they will need more than just having their familiar numbers in the lineup to get things right. There's a mindset associated with running the ball and in that area, the Steelers have been lacking. 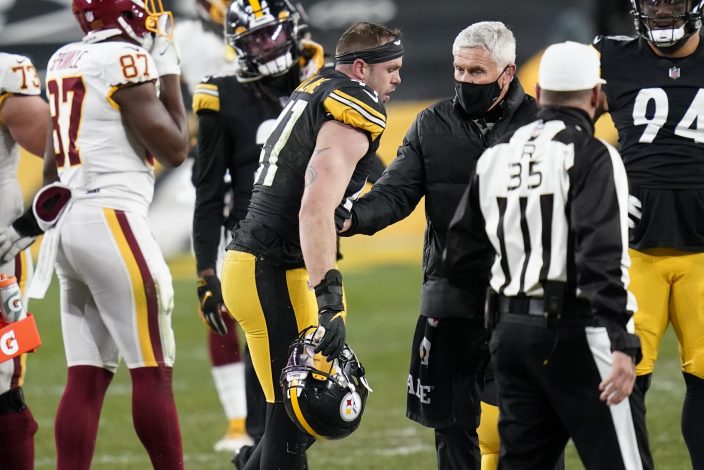 Pittsburgh Steelers inside linebacker Robert Spillane (41) walks off the field after being injured on a play during the second half of an NFL football game against the Washington Football Team, Monday, Dec. 7, 2020, in Pittsburgh. (AP PhotoKeith Srakocic)

“In terms of quality of play, we haven’t been physical enough,” Tomlin said.

Fixing it can be tricky. Practicing in full pads is almost non-existent even during a “normal” December, let alone one in the middle of a pandemic. Tomlin pointed out the Steelers spent as much if not more time in pads than most clubs during training camp.

“We carry our pads every day through the team development process,” he pointed out. 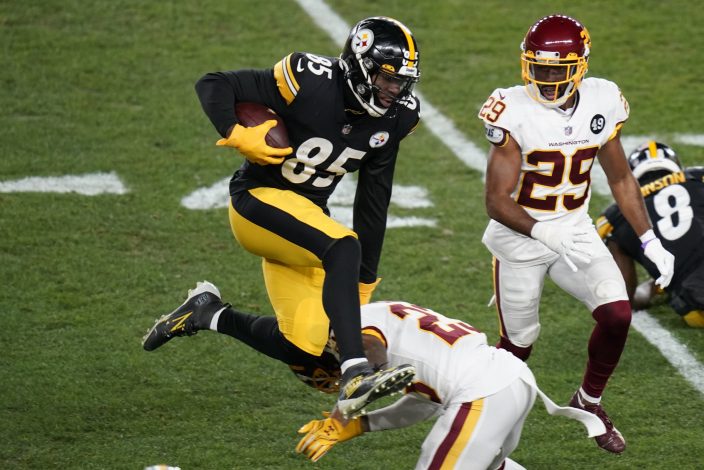 Outside linebacker T.J. Watt picked up his NFL-leading 12th sack against Washington despite playing without usual running mate Bud Dupree. The other half of one of the league's best pass-rushing duos is out for the season after tearing the ACL in his right knee.

Not that it mattered much against Washington. Watt was his typically disruptive self, though he did miss a golden opportunity in the fourth quarter when he tried to “scoop and score” on a Washington fumble rather than just fall on it. Washington's Logan Thomas recovered instead.

Pittsburgh is struggling when it tries to get tough in short yardage. Against Washington, it didn't get any better when it tried to get cute. Facing third-and-goal at the Washington 1 in the second quarter, Roethlisberger tried a play-action pass to Jerald Hawkins.

Two things here. Actually, three. First, Hawkins only became eligible just hours before kickoff after being activated off the reserve/COVID-19 list. Second, Hawkins is a backup offensive lineman by trade. Third, that's exactly what he looked like when he stumbled into his route and watched Roethlisberger's lob sail well out of reach.

James Washington is continuing to make a compelling case for more playing time. A week after his leaping grab in triple coverage helped Pittsburgh escape against Baltimore, Washington turned a hitch route into a 50-yard touchdown. With several of his teammates (more on that in a minute) struggling to hold onto the ball, Washington's role could continue to grow.

Tight end Eric Ebron and wide receiver Diontae Johnson both have game-breaking ability. To break the games though, they actually need the ball in their hands. That hasn't been automatic recently. Both had issues with the drops for a second straight game, mostly because they have developed a habit of turning their eyes downfield before securing the catch instead of seeing the ball all the way into their hands. They're hardly alone. The Steelers lead the NFL in drops with 34 and Tomlin hinted at changes in terms of playing time if things don't improve.

Cornerback Steven Nelson will attempt to practice on Wednesday and could be available for Buffalo. The same holds true for kicker Chris Boswell, who sat out with a hip injury. The nature of inside linebacker Robert Spillane's injury is uncertain, but his potential absence opens the door for Avery Williamson, acquired in a trade with the New York Jets earlier this season.

69. The Steelers tied Tampa Bay's NFL record for consecutive games with at least one sack when Watt took down Alex Smith in the first quarter. Still, Dupree's absence was felt late as Pittsburgh's pressure lagged, allowing Smith to make big plays down the field during Washington's rally.

Try to clinch a playoff berth for the first time since 2017 next week against Buffalo, where the injury-riddled secondary will have to be considerably sharper than it was in the second half against Washington.