It's not the first time Ben Roethlisberger has openly — if knowingly — questioned his own skillset.

At the end of the 2016 season, the longtime Pittsburgh Steelers quarterback hinted at retiremen t and let the question linger for months. Following an ugly loss to Jacksonville in October 2017, he semi-sarcastically suggested he didn't have it anymore.

Each time, Roethlisberger regrouped. It's what he's done relentlessly during his 17-year career, perhaps never more so than last fall following surgery on his right elbow. He finds himself at another pivotal moment after the Steelers were pushed around by Buffalo 26-15 on Sunday night, sapping whatever momentum remained from Pittsburgh's 11-0 start in the process following their second loss in a week. 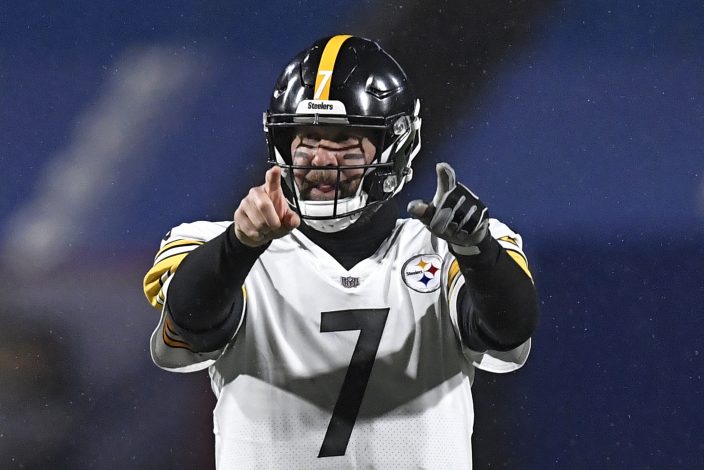 Pittsburgh Steelers quarterback Ben Roethlisberger (7) calls a play during the first half of an NFL football game against the Buffalo Bills in Orchard Park, N.Y., Sunday, Dec. 13, 2020. (AP PhotoAdrian Kraus)

“If I don’t play good enough football, then I need to hang it up,” Roethlisberger said. “I still feel like I can do enough things to help this team win football games. I’m going to do everything I can to get us back on track.”

As tends to happen when Roethlisberger is involved, it was the first line of his comments that grabbed the most attention in the immediate aftermath. Yet rather than said in anger or resentment — both of which applied during earlier times — it was more matter of fact.

Roethlisberger did not spend months rehabbing if he felt he couldn't be an impact player. And throughout Pittsburgh's 11-game run at perfection, he looked like an MVP candidate as he expertly picked apart opponents by executing the short-passing game designed to minimize the number of hits his 38-year-old body absorbed. 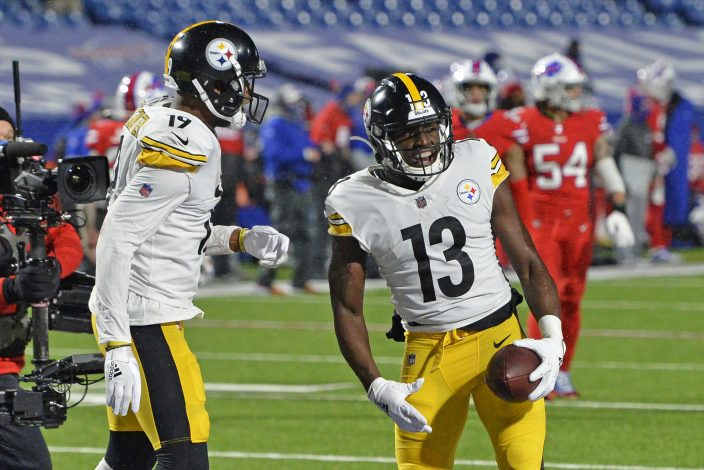 Though he was far from sharp against the Bills while completing 21 of 37 passes for 187 yards with two touchdowns and two interceptions — one of them a tide-turning pick-6 late in the first half in which he threw slightly behind JuJu Smith-Schuster — Roethlisberger's biggest problem wasn't his play so much as the play of the guys around him in the huddle.

The offensive line again struggled to open any holes despite the return of perennial Pro Bowl center Maurkice Pouncey and running back James Conner off the reserve/COVID-19 list. Pittsburgh ran for 47 yards — the fifth time in seven games the Steelers have finished with under 50 yards on the ground — and appears to be grasping for answers.

Jaylen Samuels, who had nine touches through 12 games, had seven touches against Buffalo. And while losing starting left guard Matt Feiler and replacement Kevin Dotson to injuries didn't help, the reality is the unit — regardless of the personnel — has been routinely getting dominated when asked to provide any kind of push for weeks. 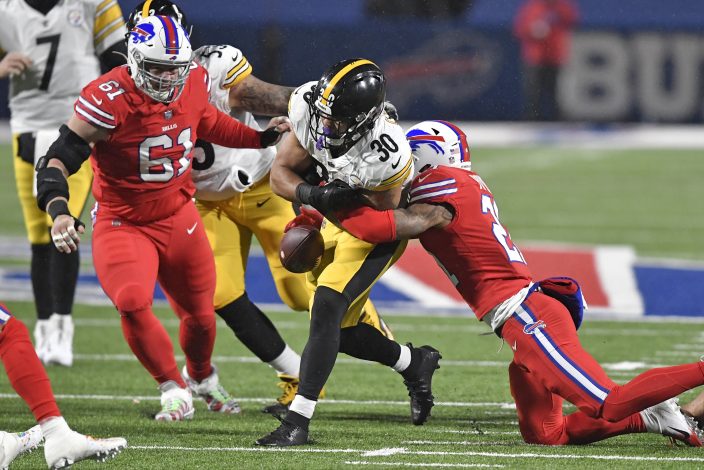 Buffalo Bills free safety Jordan Poyer, right, forces a fumble by Pittsburgh Steelers running back James Conner (30) during the first half of an NFL football game in Orchard Park, N.Y., Sunday, Dec. 13, 2020. The ball was recovered by the Steelers. (AP PhotoAdrian Kraus)

The inability to run the ball has allowed opposing defenses to become more aggressive in disrupting the passing game. Having a receiving group that can't seem to hold on to the ball isn't helping matters. Diontae Johnson found himself on the bench after two early drops and Roethlisberger's longest pass completion was a 20-yard strike to Smith-Schuster that was mostly Smith-Schuster creating a little magic after the catch.

Having success when the run game is in neutral — actually, that's being charitable, it's in reverse — is doable if the passing game is efficient and the defense plays lights-out. Neither of those things happened in Buffalo.

While the Steelers were able to force Buffalo quarterback Josh Allen into a pair of early turnovers, once he settled in, Pittsburgh couldn't keep pace on a night it played without injured starting cornerback Joe Haden and lined up recently acquired Avery Williamson and converted safety Marcus Allen at inside linebacker. 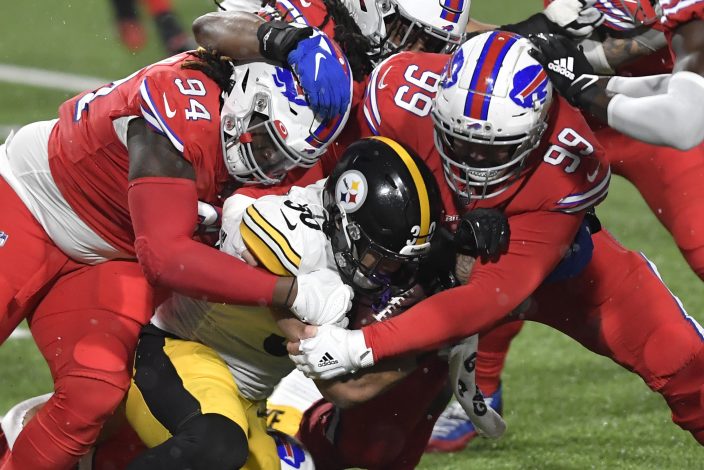 So Roethlisberger can take all the blame if he wants. It's been his go-to for years regardless of how well or how poorly he performed during a given game. The issue is the “complementary football" that served the Steelers so well has vanished.

“We’ve got to make sure when one group surrenders or gives up points, we’ve got to work together,” defensive end Cam Heyward said. "These past two games we haven’t done that. There’s a disconnect there.”

Nothing much at the moment, though wide receiver James Washington scored a touchdown for a second straight game and played a season-high 81% of the snaps.

The Steelers are averaging 3.7 yards per carry. Only Miami is less effective running the football, in part because opponents are stacking the line of scrimmage and daring rookie Tua Tagovailoa to pass. Teams aren't stacking the line against Pittsburgh as much as they're just overwhelming a weakened offensive line.

Cornerback Mike Hilton picked off his second pass of the season and while he drew a pass interference penalty that set up a late field goal, his consistent level of play should make him some money when he hits the free-agent market next spring.

Defensive end Stephon Tuitt was having a strong season before sitting out a win over Baltimore last month after being placed on the reserve/COVID-19 list. He was invisible against Buffalo, failing to get a single tackle or quarterback hit in a game for the first time since his rookie season in 2014.

There's hope Haden can return to the lineup next Monday night against woeful Cincinnati. More pressing are the issues with Feiler and Doston. J.C. Hassenauer, a center by trade, filled in late, but being forced to mix-and-match along the line is no way to get a running game going.

70. The number of consecutive games the Steelers have had at least one sack, a new NFL record. The team whose record it broke — the Tampa Bay Buccaneers — won a Super Bowl during its run. Pittsburgh's odds of that happening appear to be decreasing rapidly.

Attempt to beat the Bengals for the 12th straight time next Monday night in hopes of moving closer to an AFC North title.

The Nashville Predators have place ...