In one ear is his backup. In the other, his boss.

Drew Lock scrambled for just 4 yards Sunday but he took a giant leap toward proving to that he’s Denver's quarterback of the future.

Taming his daredevil tendencies, Lock showed patience and poise in picking apart the Carolina Panthers in Denver's 32-27 win in which he threw for 280 yards and a career-best four touchdowns on 21 of 27 passing. It was his first game without an interception since September. 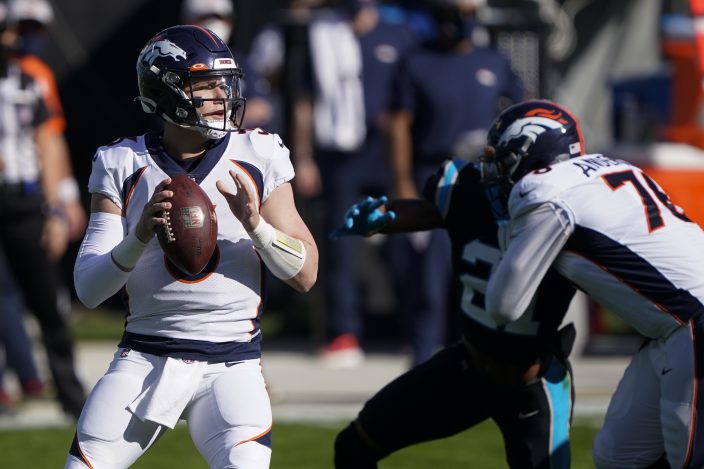 Denver Broncos quarterback Drew Lock looks to pass against the Carolina Panthers during the first half of an NFL football game Sunday, Dec. 13, 2020, in Charlotte, N.C. (AP PhotoBrian Blanco)

It was Lock, whose whopping 149.5 passer rating was the third highest in franchise history, just behind two men named Peyton Manning and John Elway.

Lock and the Broncos (5-8) sorely needed a bounce back like this. He’d thrown interceptions in eight consecutive games since returning from a sprained right shoulder that sidelined him for three weeks. He missed another game for not wearing a mask around a fellow quarterback who later tested positive for COVID-19. 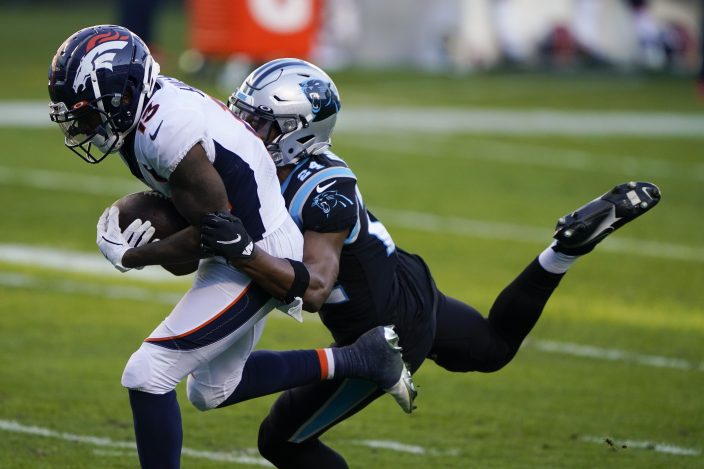 And he entered Week 14 with just nine touchdown throws and an AFC-high 13 interceptions.

On Sunday, it wasn’t the brash, panicky gunslinger throwing deep into coverage, but a calm, collected quarterback using a series of scrambles, screens and check-downs to his running backs and tight ends to set up scoring heaves of 37 and 49 yards to rookie KJ Hamler.

“It was just about me coming in and doing my job," Lock said. “Knowing that if I just play my game and let it come to me, then the big ones will come.” 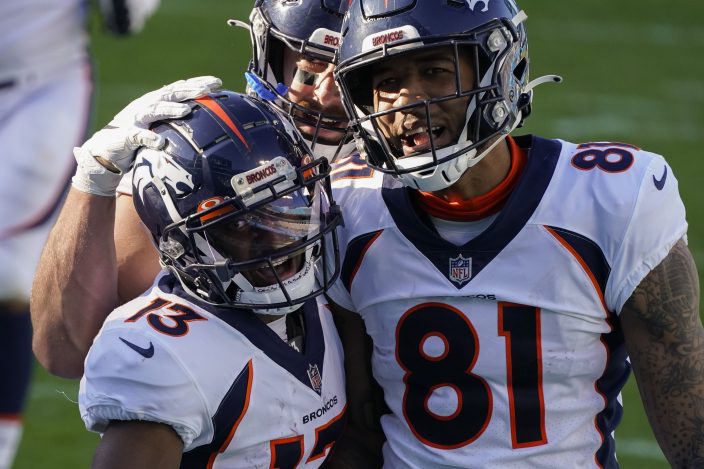 Lock said backup Brett Rypien admonishes him every week to set up the long ball by first dinking and dunking it downfield. It’s the same message he’s been hearing from Elway, the Broncos' Hall of Fame QB-turned-GM, who also was oftentimes too aggressive early in his playing career.

“Yes, he’s preached to me just doing your job and not trying to force anything,” Lock said. “Once you force it, those are the ones that you want back. ... It’s all about being calm and focused in those games. That’s when you make the right decisions, and I’ve been getting preached that quite a bit here these last couple weeks.”

Coach Vic Fangio expects to see the even-tempered quarterback and not the excitable one these next three weeks. 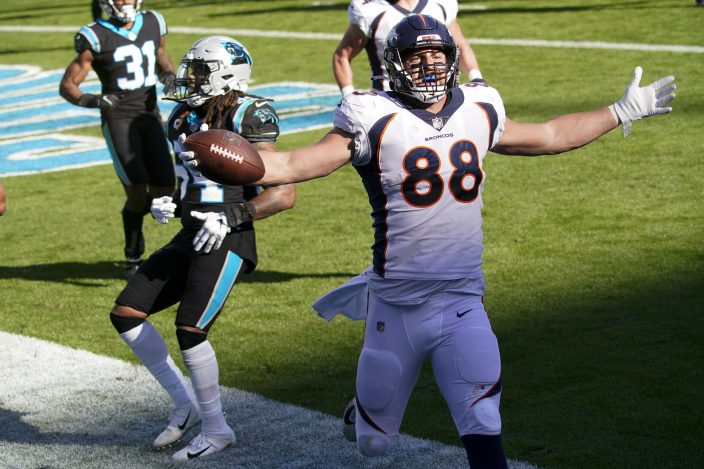 Denver Broncos tight end Nick Vannett celebrates after scoring against the Carolina Panthers during the first half of an NFL football game Sunday, Dec. 13, 2020, in Charlotte, N.C. (AP PhotoBrian Blanco)

Asked if Lock must finish strong to enter 2021 as the incumbent, Fangio said, “Well, I think everyone’s always being evaluated each and every week. Obviously, we’ve committed a lot to Drew here. We want to see him keep improving and we’re hopeful and anticipating that he will.”

Lock’s chemistry with his tight ends, even with Noah Fant sick in the locker room after just one series. Troy Fumagalli had a season-best four catches for 53 yards, and Nick Vannett had four receptions for 20 yards and his first TD.

DB Will Parks had six tackles and a sack while playing 81% of the snaps in his return to Denver after being claimed off waivers from the Eagles.

PR Deontae Spencer’s 83-yard punt return marked his first NFL TD and it came in his return from a bout with COVID-19.

OC Pat Shurmur had his best play-calling performance of the season.

K Brandon McManus missed two extra points and saw a successful PAT erased when Fangio took the point off the board after a Panthers penalty and unsuccessfully tried for 2.

A day later, McManus' tweet was much more serious. He said, “I will be going on the Reserve/COVID-19 list because of a close contact outside the building. Still plan on playing Saturday.”

He'll have to test negative five days in a row to rejoin the team. Otherwise, the Broncos would turn to Taylor Russolino, the emergency kicker they signed to their practice squad the day after they were forced to play the Saints without any of their four quarterbacks because of COVID-19. Russollino made 9 of 10 field-goal attempts with the XFL's St. Louis BattleHawks earlier this year with a long of 58 yards.

LT Garett Bolles (illness), who missed a start for the first time in his four-year career, and Fant passed their coronavirus tests Monday and flew back to Denver on a team-arranged charter flight.

1 — Game ball for DC Ed Donatell following his return from a bout with the coronavirus that sidelined him six weeks.

The Broncos need more of the same on offense next week against Buffalo and they got good news Monday when RB Melvin Gordon’s DUI case was postponed until Jan. 14, meaning he won’t be serving a three-game suspension from the NFL this month as had been anticipated.