The good news for the New Orleans Saints is that an unusually poor performance by their defensive front came against a quarterback who is an uncommonly good scrambler.

“It was a completely different type of attack offensively,” Sean Payton said of the Philadelphia Eagles' offensive scheme with rookie Jalen Hurts under center.

"And so there were a handful of things we probably would have done differently, looking at this (game) tape. But we didn’t handle the quarterback run, the quarterback contain. Obviously, when you give up (246) yards rushing, there aren’t a lot of things you did well.” 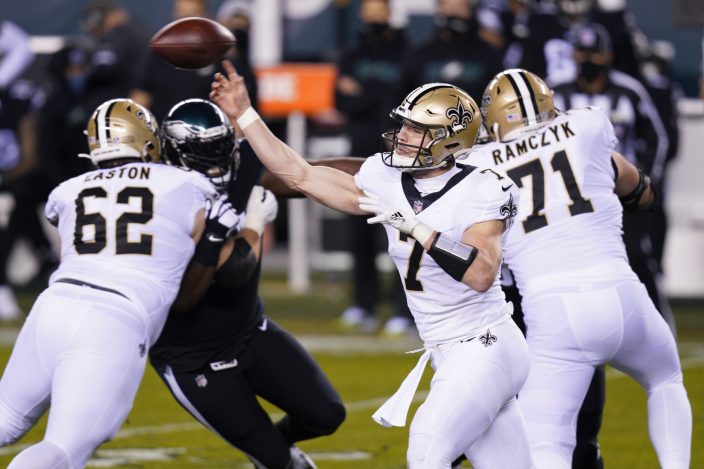 New Orleans Saints' Taysom Hill passes during the first half of an NFL football game against the Philadelphia Eagles, Sunday, Dec. 13, 2020, in Philadelphia. (AP PhotoChris Szagola)

Most teams won’t be able to attack New Orleans the same way. But that doesn’t mean the Saints won’t be racing to fix how they play mobile QBs and several other parts of their game, from intermittent sluggishness on offense to troubling misses by the field-goal unit.

“We didn’t look ready to play. And that’s a reflection on me and it is upsetting,” Payton said while reviewing game video on Monday of the Saints' 24-21 loss in Philadelphia a day earlier. 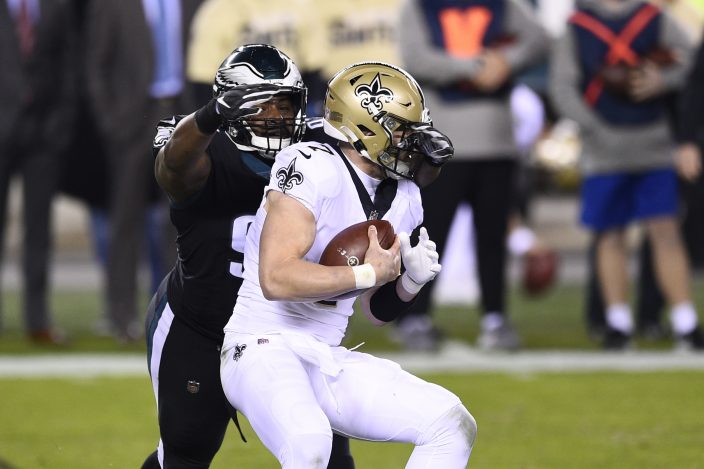 “And defensively, they’re still running,” Payton continued. "The quarterback's outside the pocket. ... The more upsetting element: There were some times with a five-man rush we were rushing to contain and we didn’t do that effectively. And so that should be easier to do when you’re rushing five, to keep the quarterback where you want him.”

Payton also expressed displeasure with Wil Lutz's missed 45-yard field-goal attempt in the first half. It was one of two misses, but the second, from 57 yards, would have been on the longer side for any NFL kicker.

“All the things we didn’t want to allow happen happened in that game,” Payton said.

The loss dropped the Saints (10-3) into a tie, record-wise, atop the NFC with Green Bay. But the Packers own the tiebreaker because they won in New Orleans in Week 3.

The loss was the first as a starter for Taysom Hill, who has filled in for the past four games for Drew Brees and might do so again against the Chiefs. Payton declined on Monday to say whether Brees might be ready to return to practice for the first time since a sack against San Francisco five weeks ago left him with cracked ribs and a punctured lung.

“We'll see,” was all Payton would say about Brees.

As for Hill, Payton said he played “all right,” and then went on to cite some of his more flawed plays, including his 10th fumble of the season on a sack.

“He’s still slow on a few decisions. He’s to the wrong side of the field a few times relative to making decisions,” Payton said.

"And I don’t like the fact that the ball was out again. The screen pass I’m watching right now needs to be out quicker with a little bit less velocity, a little bit easier. ... So there’s some things that he has to clean up.”

The Saints’ pass defense has been much improved lately and showed little drop off even in a loss, allowing the Eagles just 167 yards passing. That’s fewest allowed in a single game against an actual NFL quarterback this season. Only against Denver, which had to use a practice squad receiver as an emergency QB because of COVID protocols, did the Saints allow fewer yards passing this season.

Payton didn’t sound pleased by his offensive line play — especially not with left guard Andrus Peat — after Hill was sacked five times and the Saints failed to gain 100 yards rushing after averaging about 200 yards on the ground during their previous three games.

“Listen, Peat’s got to play better," Payton said. "I don’t think any one of them played particularly great.”

Receiver Michael Thomas continues to build toward his form last season when he was the AP Offensive Player of the Year. He led New Orleans with eight catches for 84 yards on top of two 100-yard receiving games in the past month.

Normally reliable kicker Wil Lutz missed field-goal attempts from 45 and 57 yards after missing another attempt a week earlier in which he appeared to tweak his non-kicking leg. The Saints will want him looking rock solid again going into the playoffs — and he hasn’t lately.

“We (missed) a field goal early in the game two weeks in a row,” Payton said. “That’s a problem.”

Guard Nick Easton left Sunday’s game with his second concussion of the season. The first, in Week 5, put him out for three weeks.

1 — The number of times the Saints have allowed an opponent to rush for 200 yards in a game since the beginning of the 2017 season.