PUBLIC HEALTH-LEADER DEPARTURES — An investigation finds that at least 181 public health leaders in 38 states have resigned, retired or been fired since the beginning of the coronavirus pandemic. The investigation by The Associated Press and Kaiser Health News shows that at the same time, lawmakers in 24 states have crafted legislation to weaken public health powers. By Anna Maria Barry-Jester, Hannah Recht, Michelle R. Smith and Lauren Weber. SENT: 3,010 words, photos. An abridged version of 1,240 words is also available. With PUBLIC HEALTH-LEADER DEPARTURES-PORTRAITS — Public health leaders, in their own words. 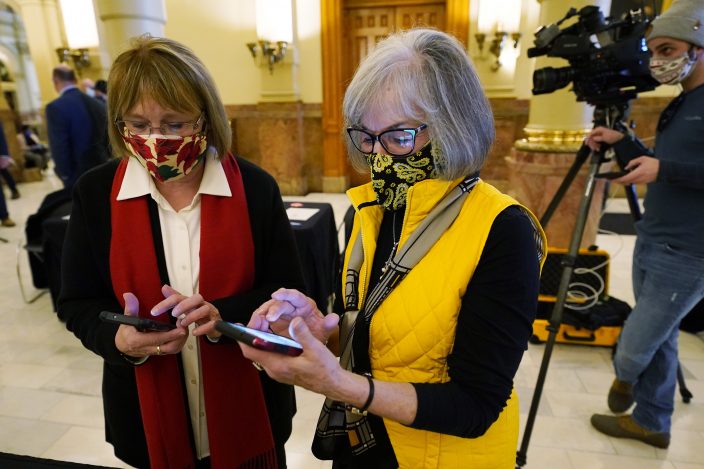 Victoria Marquesen, left, of Pueblo, Colo., checks her mobile device along with Judi Ingelido of Colorado Springs, Colo., before the two, who are part of the cadre of Colorado's nine Democratic presidential electors, cast their votes for Joe Biden at the State Capitol on Monday, Dec. 14, 2020, in downtown Denver. The vote seals the win in Colorado for Biden, who defeated President Donald Trump by about 14 percentage points or nearly 400,000 votes. (AP PhotoDavid Zalubowski, Pool)

VIRUS OUTBREAK — With Americans, Britons and Canadians rolling up their sleeves to receive coronavirus vaccines, the route out of the pandemic now seems clear to many in the West, even if the rollout will take many months. But for poorer countries, the road will be far longer and rougher. The ambitious initiative known as COVAX created to ensure the entire world has access to COVID-19 vaccines has secured only a fraction of the 2 billion doses it hopes to buy over the next year, has yet to confirm any actual deals to ship out vaccines and is short on cash. By Maria Cheng and Aniruddha Ghosal. SENT: 1,210 words, photos. 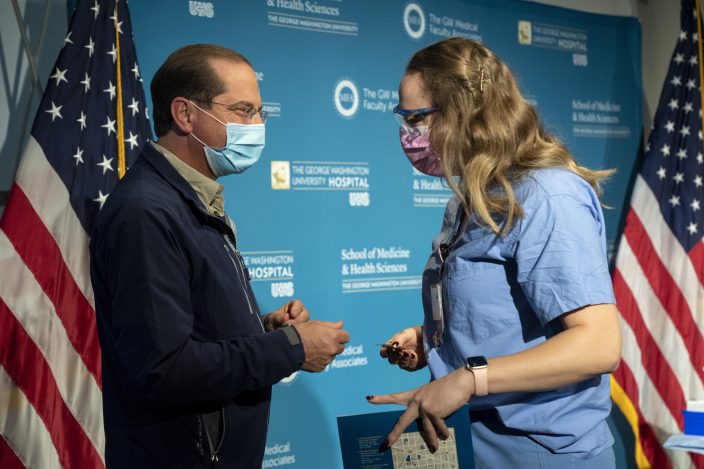 ELECTION 2020-DEMOCRATIC INSTITUTIONS — For more than a month, America’s democratic institutions have withstood a historic barrage of partisan attacks from President Donald Trump and his allies, revealing both the durability of an electoral system crafted by the nation’s founding fathers and the intense strain that system is under. SENT: 1,080 words, photos. By Julie Pace, Thomas Beaumont and Brian Slodysko. With ELECTORAL COLLEGE — Electoral College makes it official: Biden won, Trump lost; ELECTION 2020-REPUBLICANS — In a first, leading Republicans call Biden president-elect.

SENATE-GEORGIA-BIDEN — As Republicans try to brand Georgia’s Democratic candidates as puppets who would ensure a leftist takeover of the Senate, Democrats believe they have a helpful counter to the exaggerated attacks: Joe Biden. Biden is the first Democratic presidential candidate to win Georgia since 1992, and he will return to the state to campaign alongside Jon Ossoff and Raphael Warnock. By Bill Barrow. SENT: 910 words, photos. Also see BIDEN below.

ARAB SPRING-A DECADE LATER — Was it real? It’s all been erased so completely, so much blood has been shed and destruction wreaked over the past decade. The idea that there was a moment when millions across the Middle East wanted freedom and change so much that they took to the streets seems like romantic nostalgia. By Lee Keath. SENT: 1,420 words, photos. An abridged version of 1,000 words is also available.

VIRUS OUTBREAK-300K DEATHS-OPTIONAL — The U.S. death toll from the coronavirus has topped 300,000 just as the vaccine that could help conquer the outbreak is being rolled out. SENT: 1,070 words, photos.

VIRUS OUTBREAK-CONGRESS — Top Washington negotiators continue to reach for a long-delayed agreement on COVID-19 relief, but rank-and-file Democrats appear increasingly resigned to having to drop a demand for fiscal relief for states and local governments whose budgets have been thrown out of balance by the pandemic. SENT: 980 words, photos. With VIRUS-OUTBREAK-THE-LATEST.

VIRUS OUTBREAK-VIRAL QUESTIONS-SPORTS — To stay physically active this winter while limiting the risk of coronavirus infections, experts suggest activities you do alone or with members of your household. SENT: 210 words, graphic.

HEALTH CARE SIGN-UPS — A crush of sign-ups is expected on the last day of open enrollment for HealthCare.gov. SENT: 570 words, photos.

AFGHANISTAN — A bombing and a shooting attack in the Afghan capital of Kabul killed at least three people, including a deputy provincial governor, officials say. SENT: 320 words, photos.

IMMIGRATION-DEFERRED-ACTION — A federal court will consider whether to invalidate a program that shields from deportation immigrants brought to the United States as children, potentially creating complications for the incoming Biden administration. SENT: 580 words, photos. UPCOMING: Hearing at 11 a.m.

DONNER PARTY-ESCAPE TRAIL — A pair of backcountry endurance athletes who became obsessed with the Donner Party spent the last seven years researching and exploring the Sierra on foot to try to pinpoint the final 90-mile route survivors of the infamous tale of cannibalism finally cut through mountain snow drifts to safety in the winter of 1846-47. SENT: 840 words, photo.

JEFFREY-EPSTEIN-ASSOCIATE — Lawyers for the former girlfriend of Jeffrey Epstein are urging a judge to free her to await trial under a $28.5 million bail package that would include armed guards to ensure she remains safe and doesn’t flee a New York City residence. SENT: 700 words, photo.

MINNESOTA-JUVENILE-LIFER — Minnesota’s pardon board will consider freeing a Black man who was imprisoned for life as a teenager in the 2002 slaying of an 11-year-old girl hit by a stray bullet while doing homework at her dining room table. SENT: 680 words, photos.

EXPLAINER-FEDERAL-AGENCIES-HACKED — Governments and major corporations worldwide are scrambling to see if they, too, were victims of a global cyberespionage campaign that penetrated multiple U.S. government agencies and involved a common software product used by thousands of organizations. By Technology Writers Matt O’Brien and Frank Bajak. SENT: 1,030 words, photo. With FEDERAL AGENCIES HACKED — U.S. agencies, companies secure networks after huge hack.

FINANCIAL MARKETS — Asian shares sank after a lackluster day on Wall Street as investors wait to see if Congress can break a logjam on delivering more aid to people, businesses and local governments affected by the coronavirus pandemic. By Business Writer Elaine Kurtenbach. SENT: 810 words, photos.

JAPAN-ASTEROID PROBE — Officials from Japan’s space agency say they have found more than the anticipated amount of soil and gases inside a small capsule the country’s Hayabusa2 spacecraft brought back from a distant asteroid this month, a mission they praised as a milestone for planetary research. SENT: 480 words, photos.

BEHIND THE CALL — The NFL and its players say they won’t be seeking special treatment when it comes to getting the coronavirus vaccine. By Pro Football Writer Arnie Stapleton. SENT: 900 words, photos.

Max Scherzer and Juan Soto should ...