An author of a withdrawn World Health Organization report into Italy's coronavirus response warned his bosses in May that people could die and the U.N. agency could suffer “catastrophic” reputational damage if it allowed political concerns to suppress the document, according to emails seen by The Associated Press.

The comprehensive report examined how the Italian government and health system reacted after the country became the epicenter of the European outbreak in late February — with real-time data and case studies of what worked and what didn’t aimed at helping other countries prepare as the virus spread.

The agency took it down a day after it was posted on its website, prompting the official who coordinated the work to appeal directly to WHO chief Tedros Adhanom Ghebreyesus on May 28 and warn that the report's disappearance was undermining WHO’s credibility. He cautioned that any further attempts at censorship would compromise the agency's independence and its relations with donor nations that funded the research. 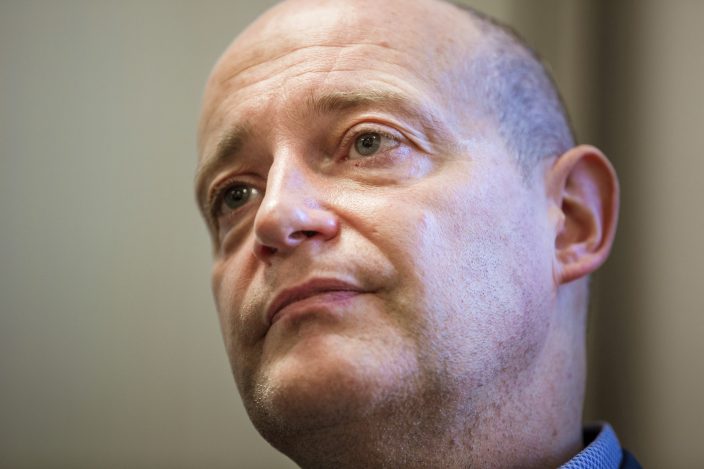 Francesco Zambon, lead author of a withdrawn WHO report into Italy's coronavirus response speaks with The Associated Press in Rome, Friday, Dec. 18, 2020. Zambon warned his U.N. bosses in May of lost lives and "catastrophic" reputational damage if they allowed Italian political interests to suppress the document, according to emails obtained by The Associated Press. (AP PhotoDomenico Stinellis)

The handling of the report could cause a “scandal of huge proportion — in a delicate moment for the U.N. health agency with the forthcoming COVID-19 investigation,” wrote Francesco Zambon, WHO's chief field coordinator for Italy and its regions during the pandemic.

WHO did not immediately respond to a request, sent late Friday, for comment on Zambon’s email to headquarters.

The report, written by Zambon and a team of WHO public health experts and consultants, was posted May 13 after it had received necessary approvals within the U.N. system, according to internal WHO documents seen by AP. The agency later said it was withdrawn because of “factual inaccuracies” that it has not detailed and denied that it received any pressure from the Italian government to remove it. 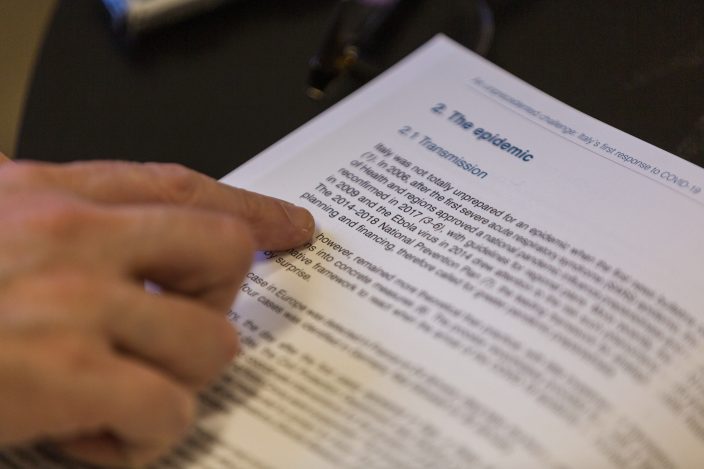 Francesco Zambon, lead author of a withdrawn WHO report into Italy's coronavirus response shows his report during an interview with The Associated Press in Rome, Friday, Dec. 18, 2020. Zambron warned his U.N. bosses in May of lost lives and "catastrophic" reputational damage if they allowed Italian political interests to suppress the document, according to emails obtained by The Associated Press. (AP PhotoDomenico Stinellis)

In the face of criticism that yanking the report deprived countries of data that could have helped them avoid Italy’s fate, WHO said Monday that it has offered another “mechanism” to assess pandemic responses. But that wasn’t rolled out until two months after the report was pulled.

Concerns over the missing report have grown in recent weeks, fueling criticism of WHO’s leadership of the global response to the pandemic that led the agency to agree to an independent probe of its performance.

The U.N. agency has been loath to publicly criticize countries that are top donors even when their policies could undermine public health. 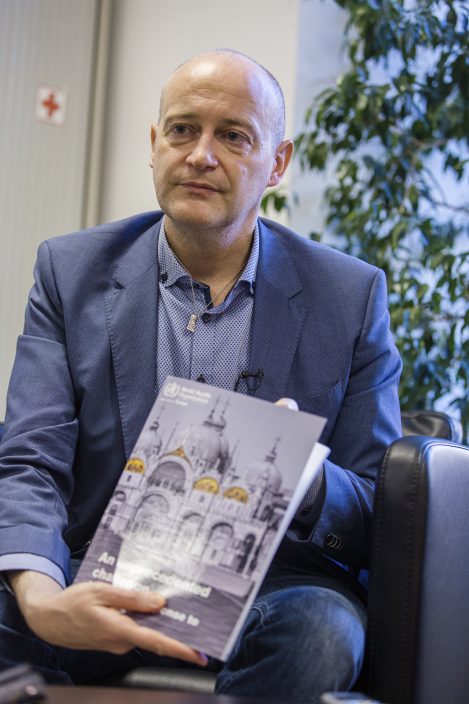 Francesco Zambon, lead author of a withdrawn WHO report into Italy's coronavirus response shows his report during an interview with The Associated Press in Rome, Friday, Dec. 18, 2020. Zambron warned his U.N. bosses in May of lost lives and "catastrophic" reputational damage if they allowed Italian political interests to suppress the document, according to emails obtained by The Associated Press. (AP PhotoDomenico Stinellis)

During the initial stages of the outbreak in January, for example, WHO officials were privately frustrated by the lack of information being shared by China, but publicly lauded the country for its transparency. As the pandemic gained pace in Europe, WHO scientists internally questioned Britain's policies — such as when it suggested it would pursue “herd immunity” — but publicly emphasized their support.

The missing report has cast a spotlight on preparedness in Italy, where Europe's deadliest outbreak unfolded. In the hard-hit province of Bergamo, prosecutors have seized on it as part of their investigation into what went wrong.

Paradoxically, the report isn't even particularly critical of the Italian government and credited officials for their efforts, praising at one point how they counteracted with data “sensational displays of disagreement in talk shows” that stirred anxiety.

The text did note that the Italian Health Ministry hadn’t updated its influenza pandemic preparedness plan since 2006. The 2006 plan was merely “reconfirmed" in 2016-2017 without being updated and was “more theoretical than practical."

“Unprepared for such a flood of severely ill patients, the initial reaction of the hospitals was improvised, chaotic and creative,” the report said. “It took some time before formal guidance became available.”

Italy’s state-run RAI television investigative “Report” program has published emails showing that a top WHO official, Raniero Guerra, who worked as a liaison with the Italian government during the pandemic, told Zambon to “correct” that Italy’s preparedness plan had been “updated” in 2016, even though the 2016 version was identical to the 2006 one.

Guerra had been in charge of prevention in the Italian Health Ministry from 2014 to 2017, when the plan should have been overhauled. He himself wrote to the then-health minister saying the plan needed to be updated, according to a copy of his 2017 memo seen by AP.

WHO has said the Italian government “at no time” asked it to remove the report, which it now says it does not endorse. “The decision to remove the document from the website was taken by WHO’s Regional Office for Europe due to factual inaccuracies,” WHO said.

Guerra told the Financial Times he didn’t interfere. He added that the 2006 preparedness plan actually didn’t need to be updated because no significant flu strains had been identified since then and that the preparedness plan wasn't relevant to the current pandemic because it was only meant to cover influenza.

The deputy health minister, Pierpaolo Sileri, begged to disagree. “That plan was from 2006 and needed to be updated,” Sileri told the Corriere della Sera paper. Guerra didn’t immediately respond to questions from AP, saying he was traveling.

The emails seen by AP suggest that WHO officials were concerned that the report had upset the Italians, offering rare insight into decision making by the U.N. agency, which is not subject to Freedom of Information requests.

In a May 13 email to Zambon, Guerra noted that Italy had just made a 10 million-euro ($12.3 million) voluntary donation to the WHO, and that negotiations between WHO and Italy for funding the agency’s Venice office were about to begin.

“There are already signs of institutional turmoil from the Italian side and unnecessary resentment against the WHO,” Guerra wrote to Zambon on May 14, the day the report was yanked.

A day later, the head of WHO Europe, Dr. Hans Kluge, wrote to Zambon that the “key issue” at stake in the controversy was his relationship with the Italian health minister, Roberto Speranza, who he said had been “very disappointed” by the report.

The Italian government, he said, feels “they are constantly attacked by the press and each word can be misinterpreted. They felt stepped (on) by a friend.”

Kluge said he would propose to Speranza including Italian health officials in a review of the report. “We need MoH (Ministry of Health) happy and sign off for Venice,” he said, referring to the funding for the office.

The ministry told RAI it doesn't consider the report official.

Meanwhile, Zambon was warning Tedros and Kluge that lives were being put at risk around the world by withholding Italy's “lessons learned.”

“A large team of experts worked literally days and nights with one motivation: making sure that what happened in Italy is not repeated in those countries behind in time in the epidemic curve,” Zambon wrote Kluge on May 27. “The report contains important messages, extrapolated from facts on what worked (many things) and the blind spots of the system.”

A day later, in a message to the WHO chief, Zambon warned of a “risk of catastrophic damage in terms of independence and transparency if a ‘censored’ version of the above mentioned publication is modified,” as well as “compromised” relations with the government of Kuwait, which is one of WHO’s biggest donors and had funded the research with an $80 million grant.