That’s one of the reasons Tepper decided to fire general manager Marty Hurney on Monday, two days after the team dropped to 4-10 following a 24-16 road loss to the Green Bay Packers. Tepper said Hurney was more “traditional” in his approach to scouting and player personnel, but he wants to use more analytics when the team makes decisions.

“If you look at how people perform at different times in the game and make sure you have that understanding before you make a contract with somebody,” Tepper said. “How do they perform in a fourth quarter or how do they perform in a two-minute drive? You make sure that you have those data points, which would make sense when you're making a decision (just) as much as how you think they throw.” 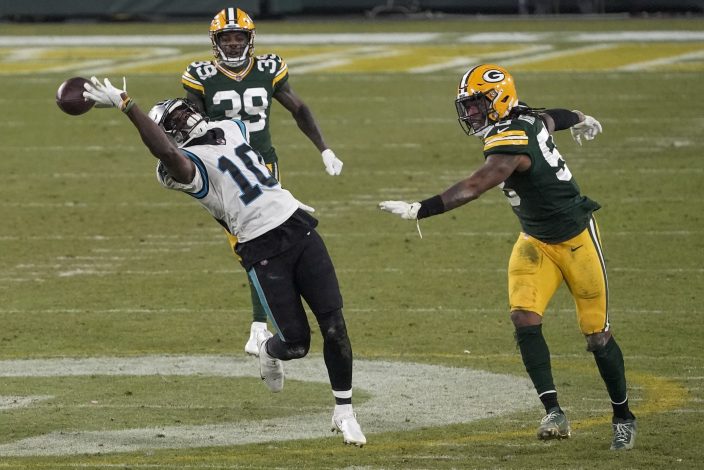 Those comments may not bode well for quarterback Teddy Bridgewater, who has struggled in those type of late-game situations.

The Panthers have lost eight games this season in which Bridgewater has had the ball in his hands in the final minutes with a chance for the Panthers to take the lead or tie, including on Sunday against the Packers.

Tepper was noncommittal when discussing Bridgewater's future, but clearly left open the idea of alternatives. Carolina's backups are P.J. Walker and Will Grier, but the team also could have a top-five pick in the NFL draft. 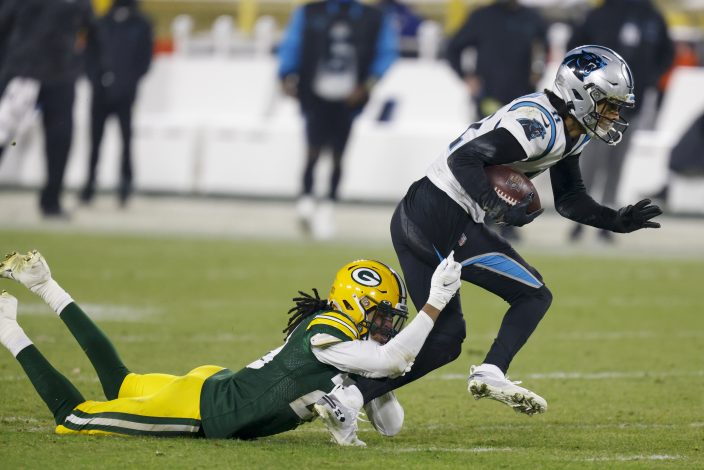 Outside of potentially Dak Prescott, there is not much available in the upcoming NFL free agent market.

“When you get to the quarterbacks in the NFL in general you want to figure out do you have the best that is in the position in the business right now,” Tepper said. “And that is constant evaluation, and re-evaluation of that is constantly what we will go through.” 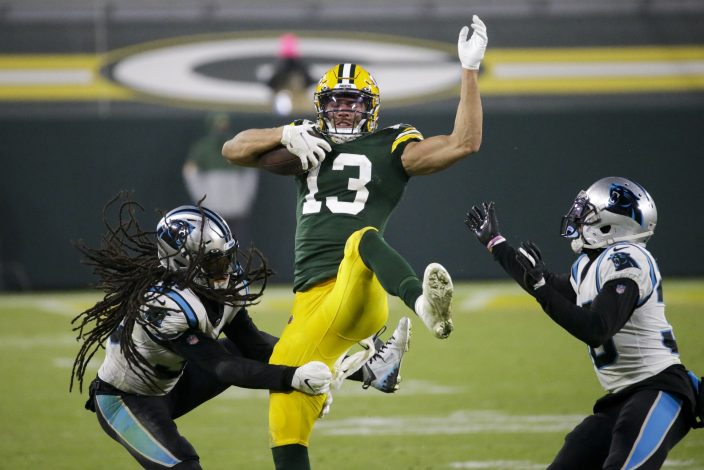 Green Bay Packers' Allen Lazard catches a pass during the second half of an NFL football game against the Carolina Panthers Saturday, Dec. 19, 2020, in Green Bay, Wis. The Packers won 24-16. (AP PhotoMike Roemer)

Carolina's young defense seems to be steadily improving under coordinator Phil Snow. The Panthers had a season-high five sacks against Aaron Rodgers on Sunday and held the Green Bay QB to 143 yards passing and three points in the second half. That certainly offers some promise moving forward for a mostly young group.

The Panthers have not had a consistent running game since Christian McCaffrey was injured against the Chiefs. The good news is McCaffrey has a chance to play against Washington. He has missed the last five games with shoulder and thigh injuries and has missed 11 games overall due to injury. So far, that four-year, $64 million contract has not worked out so well for the Panthers. 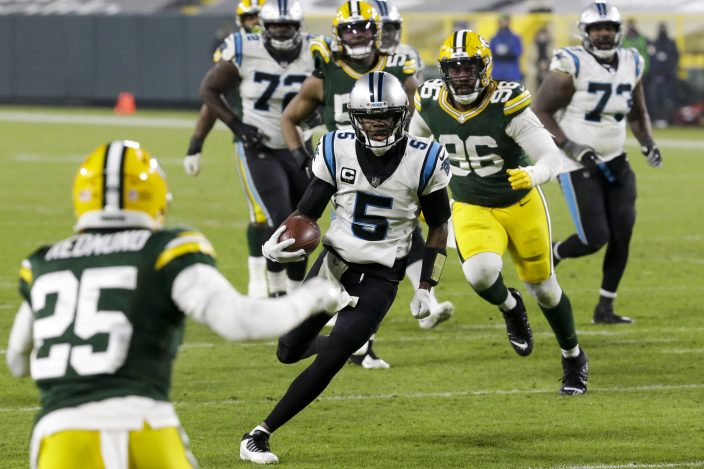 Carolina Panthers' Teddy Bridgewater runs for a touchdown during the second half of an NFL football game against the Green Bay Packers Saturday, Dec. 19, 2020, in Green Bay, Wis. (AP PhotoMike Roemer)

The Panthers are the only team in the NFC with two wide receivers with at least 1,000 yards receiving in D.J Moore (1,051) and Robby Anderson (1,017). Moore showed again he has superstar potential on Sunday with six catches for 131 yards, a 21.8-yard average. The big question moving forward will be if the Panthers can afford to keep soon-to-be unrestricted free agent Curtis Samuel, the versatile No. 3 wide receiver who also doubles as a running back when needed. Samuel has 772 yards from scrimmage and five touchdowns and has been extremely productive on third downs. However, it may be difficult to keep him given they already have Moore and Anderson on the roster and have other pressing needs, not the least of which is re-signing offensive tackle Taylor Moton.

Also in the “stock up” department is cornerback Donte Jackson, who had perhaps his best games against Packers star Davante Adams, who had his streak of eight consecutive games with a touchdown snapped. 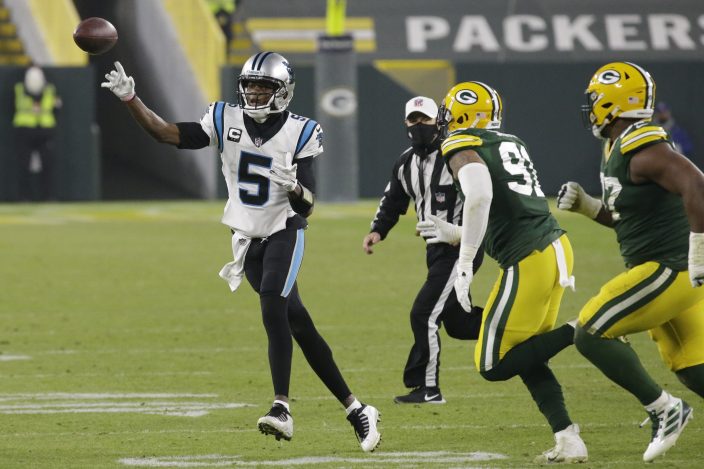 Carolina Panthers' Teddy Bridgewater throws a pass during the second half of an NFL football game against the Green Bay Packers Saturday, Dec. 19, 2020, in Green Bay, Wis. (AP PhotoMike Roemer)

It's pretty clear that kicker Joey Slye likely needs a strong finish to keep his job. He made three short field goals on Sunday against the Packers, but still needs to show some consistency on his long field goals. Slye is 1 of 6 on kicks from beyond 50 yards out, although two of them have been desperation attempts from beyond 60. 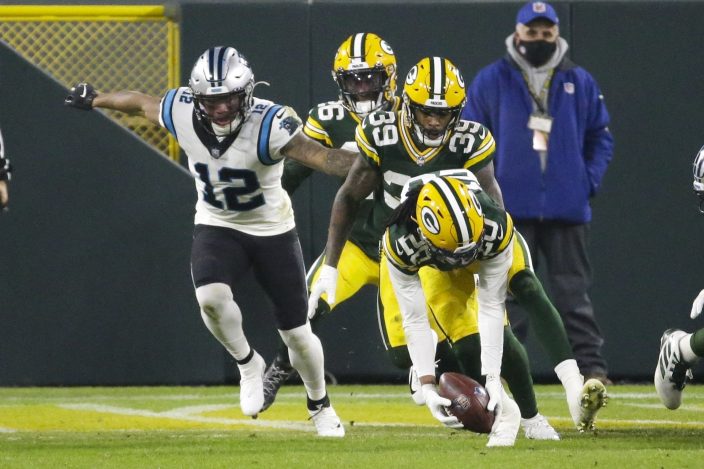 The Panthers might have lost their top pass rusher Brian Burns for the final two games after he injured the MCL in his knee following a sack on Rodgers late in the fourth quarter. Burns was expected to get an MRI on his knee Sunday, but the team has not yet released the results of that test.

9-19 — Panthers' record since David Tepper took over as owner. 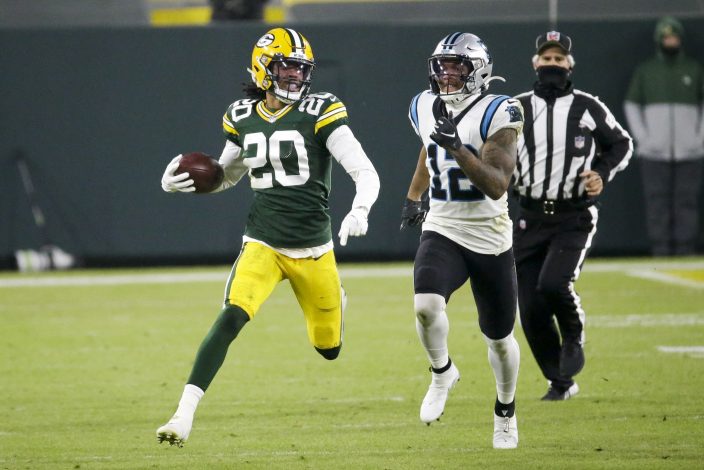 The Panthers will face their former coach Ron Rivera on Sunday in Washington. It could be an intriguing week if Washington decides to pursue Hurney as its new general manager. Hurney and Rivera worked together in Carolina and remain close friends.