Thailand’s government is confident it can contain a major coronavirus resurgence without a national lockdown, instead relying on provincial controls as the outbreak mainly among migrant seafood workers continued to spread.

“I can assure that the government will do its best,” Prime Minister Prayuth Chan-ocha said in a live televised address after a meeting of the government’s COVID-19 coordinating center. “The Public Health Ministry confirms to me that it is controllable if everyone gives cooperation.”

Thailand generally has been seen as successful in combating the coronavirus due partly to its well-regarded public health infrastructure and people's adherence to mask-wearing and other protocols. 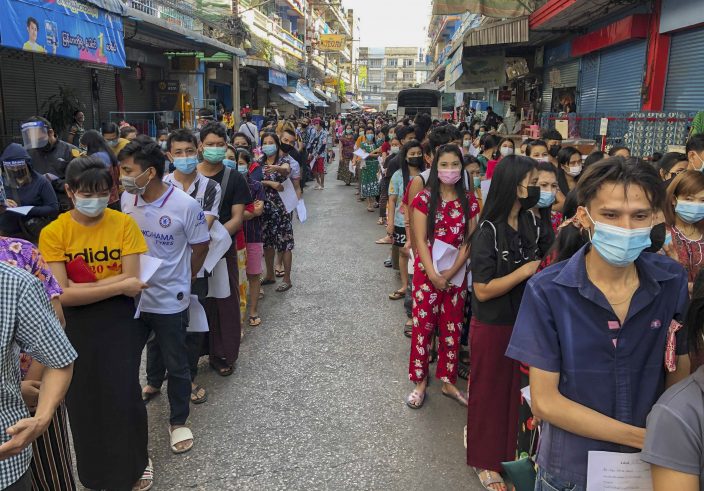 FILE - In this Dec. 20, 2020, file photo, People stand in lines to get COVID-19 tests in Samut Sakhon, South of Bangkok. Thailand, which has kept the coronavirus largely in check for most of the year, is facing a challenge from a large outbreak of the virus among migrant workers in the province close to Bangkok.(AP PhotoJerry Harmer, File)

But cases have jumped significantly since an outbreak was detected last week among migrants from Myanmar working at a seafood market in Samut Sakorn, a province near the capital Bangkok. Millions of low-wage jobs in Thailand are filled by workers from less affluent neighboring countries, especially Myanmar.

Since Sunday, more than 1,000 migrant workers have tested positive for the virus, along with Thais working or living near the seafood market, which supplies much of the country.

Contact tracers tracked possible cases by identifying vendors' major customers, and about 10,000 people at risk have been tested. Cases traced to the Samut Sakhon market have been found in 27 provinces, the government said. 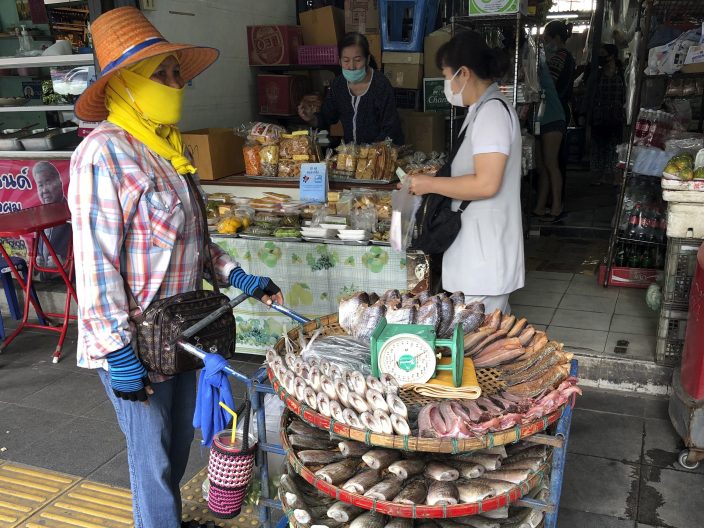 A vendor wearing a face covering to help prevent the spread of coronavirus sells fish from a pushcart outside a produce market in central Bangkok on Wednesday, Dec. 23, 2020. Thailand has kept the coronavirus largely in check for most of the year but is facing a challenge from a large outbreak of the virus among migrant workers linked to a major seafood market close to the Thai capital.(AP PhotoAdam Schreck)

Heath authorities on Thursday confirmed 67 new cases, bringing the nation's total to 5,829 including 60 deaths. New cases among migrant workers were not reported on Wednesday and Thursday, with the explanation that they were being rechecked.

The government's strategy to contain the outbreak is to impose restrictions by province.

Samut Sakhon is designated a “highly controlled” area, where there are field hospitals to isolate patients, non-essential businesses are closed, people are supposed to work from home and New Year’s celebrations are banned. The province is a center for industry, and some factories will be allowed to continue operating.

Bangkok falls into the second most serious category of “controlled.” Public establishments will have limited hours but can remain open. There will be no public New Year’s celebrations, and private celebrations should be limited in size. Most of the country, those provinces with fewer than 10 cases of COVID-19, fall into two categories of surveillance.

“The efforts of the last few days have paid off. Statistics are on a downward trend,” said Natapanu Nopakun, the English-language spokesman for government’s coronavirus-fighting agency. “The key word is ‘controllable.’”