This time, JuJu Smith-Schuster saved his dancing for the locker room.

The Pittsburgh Steelers wide receiver who drew the ire of opponents and an admonition from head coach Mike Tomlin recently for TikToking his moves on the midfield logo during warmups celebrated the end of a three-game winning streak in decidedly on-brand fashion.

Sporting newly minted AFC North champion hats and T-shirts, Smith-Schuster and a handful of teammates celebrated Pittsburgh's stunning rally over Indianapolis on Sunday by putting together a loosely choreographed routine. It ended with rookie receiver Chase Claypool on his knees with his arms raised in a shout that looked like a mixture of joy and relief. 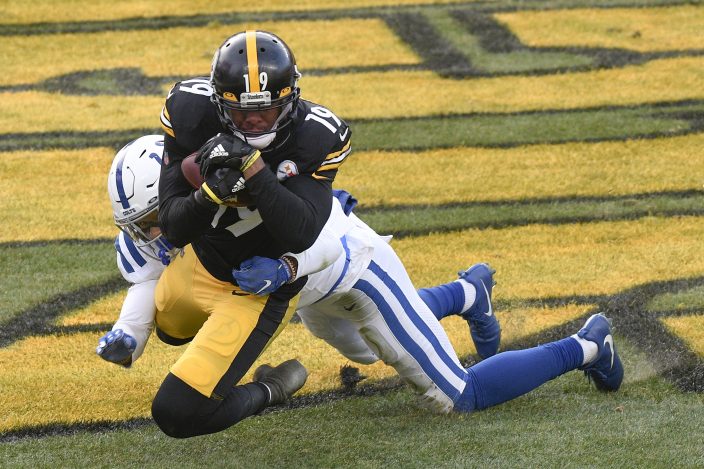 There's plenty to go around.

After spending the better part of a month doing everything they could to prove their 11-0 start was mostly smoke and mirrors, the Steelers (12-3) put together 20 minutes of brilliance against the Colts. They earned the franchise's seventh division title in Tomlin's 14 seasons. The offense scored touchdowns on three straight possessions to erase a 17-point deficit. The defense harassed Indianapolis quarterback Philip Rivers into a late interception and an errant fourth-down heave to clinch it.

“I hope it’s something we can build on,” defensive end Cam Heyward said. “We don’t have to play perfect, but we can still battle back." 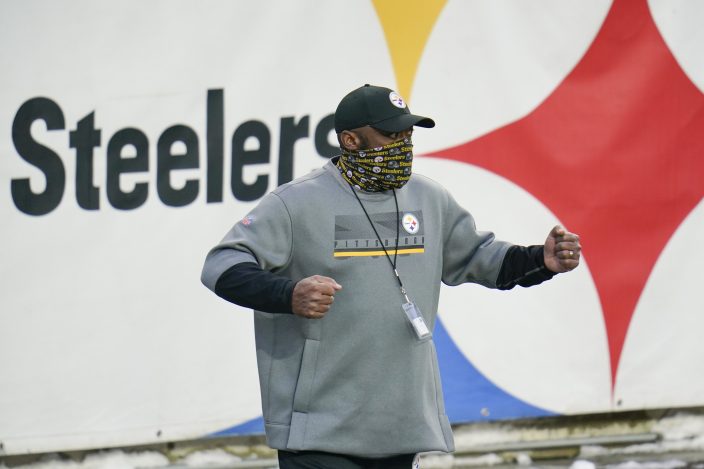 The question going forward is which team is the “real” Steelers? The one that looked disjointed and disinterested during a three-game losing streak that seemed all but certain to extend to four after the Colts took a 24-7 lead? Or the one that spent three months flirting with perfection, then took a monthlong siesta before offering a spirited reminder in the fading afternoon sunlight at Heinz Field?

The playoffs will provide the answer. For now, the Steelers can (briefly) relax knowing their postseason will begin at home and the form showed during a franchise record-setting start is still in there somewhere.

“We’ve been through some adversity,” Tomlin said. “But just growth in the midst of that. Hopefully, these negative experiences can galvanize us, man, and strengthen us as we move forward. We got some big battles that lie ahead.”

The deep ball, a part of the offense that had gone missing for weeks, returned against the Colts. Roethlisberger unsuccessfully attempted to dink-and-dunk his way downfield in the first half, then the Steelers finally generated some momentum after going up-tempo in the third quarter.

Roethlisberger's numbers after halftime — 23 of 29 for 244 yards and three touchdowns — were reminiscent of his scorching opening stretch of the season. It helped that his receivers, from Smith-Schuster to Diontae Johnson to tight end Eric Ebron, held onto the ball. Johnson's diving 39-yard scoring grab late in the third quarter was the spark that lit the flames of the comeback and provided a reminder of what the Steelers are capable of when Roethlisberger is time to do his job.

Maybe they should just bail on the running game entirely. Pittsburgh mustered 20 yards on the ground on 14 carries (not counting kneel-downs). While James Conner's return from a quadriceps injury helped immensely in the passing game, he ran for 20 yards on five carries. Benny Snell's wildly uneven season continued. A week after piling up 84 yards against Cincinnati, Snell's six carries resulted in zero yards.

Might be time for outside linebacker T.J. Watt clear room on his mantle for the Defensive Player of the Year Award, and do-everything nickel back Mike Hilton to clear room in his bank account for a raise. Watt had two sacks for an NFL-best 15, including a strip-sack of Rivers that Hilton recovered to set up Pittsburgh's first touchdown. Hilton, set to become a free agent, also picked off Rivers in the fourth quarter.

The special teams were a strong suit in September and October. Not so much anymore. They were flagged four times against the Colts and the punt coverage unit let Indianapolis returner Nyheim Hines average 21.0 yards per return.

The Steelers escaped relatively unscathed. Still, kicker Chris Boswell's hip, which forced him to be inactive for the second time in a month, is a concern. Replacement Matthew Wright was perfect on four extra-point attempts but lacks Boswell's field-goal range and ability to put the ball in the end zone on kickoffs.

1 — players in franchise history with multiple seasons of at least 14 sacks after Watt's two takedowns of Rivers. Watt's 15 sacks are one shy of the team record set by linebacker James Harrison in 2008 when Harrison was Defensive Player of the Year.

Figure out who to sit heading into the regular-season finale in Cleveland next weekend. The Steelers are assured of finishing no lower than the third seed, rendering the game against the Browns relatively meaningless for Pittsburgh. The Browns, by contrast, need to win to end an 18-year playoff drought.