Jack Eichel doesn’t have to search far back or long to see what it’s like to win in Buffalo.

The Sabres captain need only look to members of the NFL's Buffalo Bills — owners Terry and Kim Pegula’s other major sports franchise — to draw inspiration.

“It’s been pretty cool to see the city get behind them and be excited about their group and what they’re doing and the potential they have,” Eichel said on a video conference call Wednesday, a day before the Sabres report for the start of training camp. “I think it’s definitely motivation for us. We want to be successful. We want to produce a winning team and be in the playoffs.” 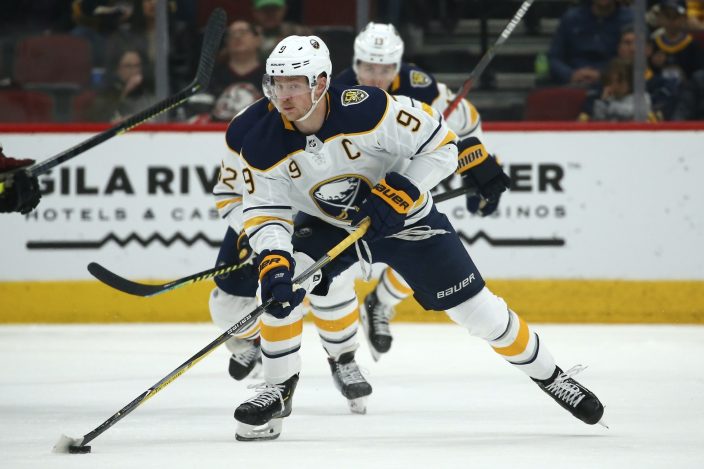 Buffalo Sabres center Jack Eichel skates with the puck against the Arizona Coyotes during the second period of an NHL hockey game Saturday, Feb. 29, 2020, in Glendale, Ariz. The Sabres front office and roster have undergone numerous changes in the seven months since captain Jack Eichel said he was fed up with losing after Buffalo missed the playoffs for a ninth consecutive year. (AP PhotoRoss D. Franklin)

The tables have most definitely turned in Buffalo, where the Bills were once considered the city’s weak link during a 17-year postseason drought spanning 2000-16.

While the Bills have won their first AFC East title since 1995 and preparing to make their their third playoff appearance in four seasons, the Sabres are in the midst of a nine-year postseason drought — the NHL’s longest active streak and one short of matching the league record.

Eichel has been with the Sabres for five of those seasons since being selected with the No. 2 pick in the 2015 draft. And he’s driven on doing his best to make sure this upcoming coronavirus pandemic-altered, 56-game, division-play only season ends with a different result.

“Yeah, I think I’m for sure still fed up with losing,” Eichel said, repeating the frustrations he voiced in May when the Sabres (30-31-8) fell less than one winning percentage point short of qualifying for the Eastern Conference's 12th and final expanded playoff berth.

“I think I’ve tried to harness that as much as I can use that in a productive manner to try to get better prepared for the season and obviously try to change that."

He and the Sabres have had plenty of time to prepare since they last took the ice on March 9, when Dominik Kahun scored the decisive shootout goal in a 3-2 win over Washington. It just so happens, Buffalo will open the season with consecutive home games against the Capitals starting on Jan. 14.

Much has changed with the Sabres following yet another tumultuous offseason in which general manager Jason Botterill was unexpectedly fired in June and replaced by former NHL player Kevyn Adams, who has no previous front-office experience.

Adams, Buffalo's third GM since Darcy Regier was fired in 2013, has quickly placed his stamp on the Ralph Krueger-coached team with two major moves this past fall.

First, he acquired veteran Eric Staal in a trade with Minnesota to address Buffalo’s need of an established second-line center. Adams then upgraded the Eichel-centered first line by signing, Taylor Hall, the NHL’s 2018 MVP and the most high-profile forward on the free agent market, to a one-year $8 million contract.

“He’s somebody who obviously has super high-end talent,” Eichel said of Hall. “It was obviously an exciting moment for our franchise, for the city. He’s in the top caliber of players in our league and MVP for a reason. I think he’s going to bring a lot to our group.”

The addition of Hall, a six-time 20-goal-scorer, should help draw attention away from Eichel, who is coming off a career year in which he finished with 36 goals and 78 points in 68 games. Hall and Staal should also upgrade the Sabres offensive depth after the team over-relied on a top line — rounded out by Sam Reinhart and rookie Victor Olofsson — that accounted for 78 of the team’s 193 goals last season.

It won’t be easy for the Sabres, who were thrust into a newly formed East Division featuring six or eight teams who made the playoffs last season. The division includes Pittsburgh and Washington, who have won three of the past five Stanley Cup titles, plus Boston, last season’s President’s Trophy winners.

Sabres' captain Eichel out for `the foreseeable future'

Sabres GM Adams says he has no intention of trading Eichel