A look at what’s happening around European soccer on Tuesday:

Tottenham hosts second-tier Brentford in the League Cup semifinals, with manager Jose Mourinho saying it is the biggest match since he arrived at the club in November 2018. Mourinho was brought to Tottenham to end the club's wait for a trophy, which stretches to 2008, and is looking to win the League Cup for a fifth time — after three with Chelsea and one with Manchester United. “It's not about me, it's not about me four or five times, or me winning at three clubs, it’s not about me at all,” Mourinho said. “It's about my club, it's about the players who want trophies, it's about fans who want trophies." Brentford is in fourth place in the 24-team Championship and has beaten four Premier League teams to get to its first ever cup semifinal. “I have studied football for many years and Jose is one of the greatest of all time so it’s a privilege to play against his team,” Brentford manager Thomas Frank said. “I admire him a lot for having that fantastic career. But when the whistle blows it’s just another bloke standing in the dugout." Tottenham is without right back Matt Doherty, who is suspended, while forward Erik Lamela will play no part after being pictured breaking coronavirus rules with two teammates over the Christmas period. The winner will meet Manchester City or Manchester United in the final. 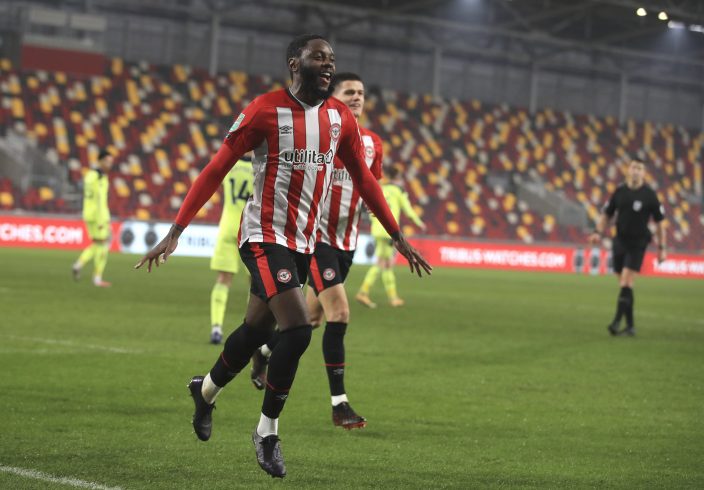 Sevilla and four other of Spain’s first-division sides face second-round matches in the Copa del Rey against lower-tier opponents. Sevilla visits third-division Linares, while Villarreal is at Zamora, Getafe at Córdoba, Celta Vigo at Eivissa, and Valladolid at Marbella. Sevilla coach Julen Lopetegui has left out Jesus Navas, Lucas Ocampos and Diego Carlos to give them extra rest. Celta’s match on the island of Ibiza will be played on artificial turf.

MATCHDAY: Wolves-Leeds in EPL; Lyon aims for 1st in France

MATCHDAY: Ronaldo back in Portugal as Juventus faces Porto