New Orleans Saints coach Sean Payton can draw encouragement from the fact that his team enters the playoffs having won 11 of 13 games despite a lack of stability at several key positions.

“We are always looking to find players that will help us with some versatility,” Payton said Monday, a day after his team defeated Carolina 33-7 despite losing all of its regular running backs — including the record-setting Alvin Kamara — to COVID-19 protocols.

“It starts with a culture we believe we’ve kind of created,” Payton continued. “We’re looking for like-minded players that can fit, that we feel like we have a vision for.” 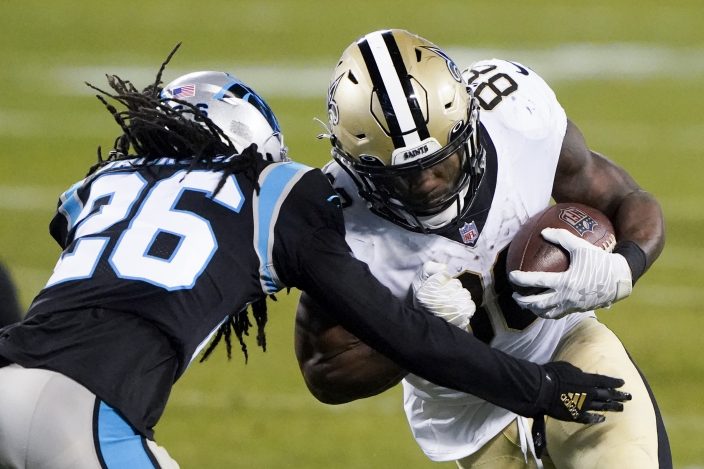 The Saints managed to rush for 156 yards by relying primarily on Ty Montgomery, a reserve who’s been doing the bulk of his work in practice as a receiver in recent weeks. New Orleans also was able to turn to sturdy and versatile reserve QB Taysom Hill for some read-option runs.

Drew Brees was efficient in the passing game despite two starting receivers — Michael Thomas and Tre’Quan Smith — being out. And New Orleans’ defense came through with five interceptions despite the absence of starting safety Marcus Williams (ankle), nickel back C.J. Gardner-Johnson (COVID-19 reserve) and defensive back D.J. Swearinger (COVID-19 reserve).

With the lopsided victory, the Saints clinched the No. 2 seed in the NFC.

“We’ve dealt with some adversity, obviously, and I think we were able to perform well, at a high level and in all phases,” said linebacker Alex Anzalone, who was inserted as a starter after Kwon Alexander was lost for the season with an Achilles tendon injury last week.

Earlier this season, Brees missed 4 1/2 games because of rib and lung injuries. The Saints hung on to win the game that Brees left at halftime and won the next four that Brees missed entirely. Michael Thomas, the 2019 Offensive Player of the Year, missed nine games, of which New Orleans won six.

Now, as the Saints enter the playoffs for a fourth straight season, they’ve not only passed tests of their resilience, but also appear on the brink of getting some top players back.

Thomas (ankle) and 2019 All-Pro returner Deonte Harris (neck) are both eligible to come off injured reserve. Kamara and fellow running back Latavius Murray could be eligible to come off the club’s COVID-19 list by Sunday’s playoff opener. The same goes for Gardner-Johnson. And Brees has had three games to round back into form since returning from his injuries.

“We still got the job done, which was good to see,” tight end Jared Cook said while reflecting on the regular season. “But we all know that playoffs is a totally different level.”

While the Saints have been lacking in very few areas this season, they have not had much success separating opposing offensive players from the ball. New Orleans’ six forced fumbles ranked 30th in the league.

Montgomery. He had been trying to carve out a role as a receiver in recent weeks until suddenly late last week the Saints had to scratch all of their regular running backs from Sunday’s game at Carolina. Montgomery moved back to running back on little more than a day’s notice and rushed for 105 yards on 18 carries.

Reserve QB Jameis Winston has not appeared to be as good a fit with the Saints as he or the club hoped. He saw limited action this season despite Brees missing four-and-a-half games. Winston attempted 11 passes, completing seven for 75 yards and was sacked twice. Perhaps the playoffs will provide an unexpected opportunity for Winston, but his chances of returning next season appear slim.

It's not yet clear whether safety Marcus Williams, who has missed two games with a ankle injury, will be ready for the playoffs. Receiver Tre’Quan Smith would not be eligible to come off injured reserve until the second postseason game at the earliest.

9 — The number of playoff seasons for Drew Brees, who wears No. 9, since he and Payton joined forces 15 seasons ago in 2006.

The Saints host Chicago to open the playoffs on Sunday. The Saints pulled out a victory in overtime at Chicago earlier this season.