For much of 2020, Thailand had the coronavirus under control. After a strict nationwide lockdown in April and May, the number of new local infections dropped to zero, where they remained for the next six months.

Thailand closed its borders, enforcing mandatory quarantines for its own citizens and the handful of foreigners allowed to visit. But aside from a few outward signs of the “new normal,” like the ubiquitous wearing of masks and reminders to practice social distancing, life resumed as though the pandemic had largely run its course.

A new outbreak discovered in mid-December threatens to put the country back where it was in the toughest days of early 2020, when it tallied 3,045 cases and 59 deaths. Thailand's COVID-19 coordinating center has warned that the number of new daily cases could rise to more than 10,000 by later this month under a worst-case scenario if the government does not do more to curtail the virus’s spread. 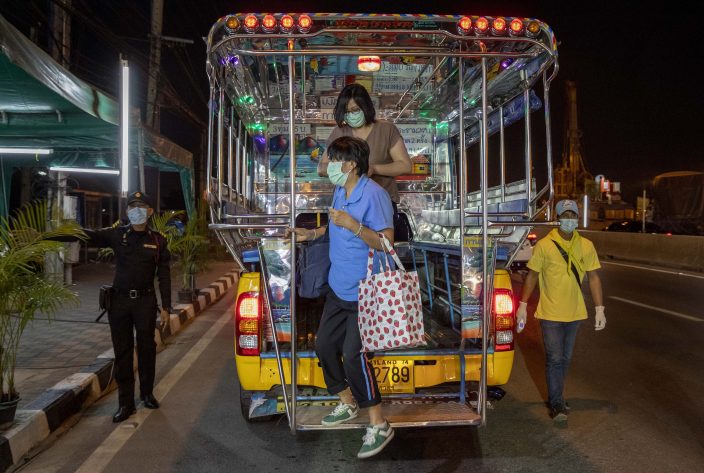 Passengers of a vehicle get off to to be examined at a check point on the border of Samut Sakhon province and Bangkok, in Thailand, Monday, Jan. 4, 2021. Thailand reported on Tuesday, Jan. 5, 2021, over 500 new coronavirus cases, most of them migrant workers who already were isolated, and the government said it was tightening movements of people around the country. (AP PhotoGemunu Amarasinghe)

The outbreak identified in mid-December was centered in a seafood market in Samut Sakhon, southwest of the capital Bangkok, that employs thousands of Myanmar migrant workers. It has now spread to 56 of Thailand’s 77 provinces.

On Tuesday, the country reported 527 new cases, most of them migrant workers linked to the market in Samut Sakhon. A day earlier, Thailand counted 745 new cases, an all-time high since the pandemic was first found in the country last January. 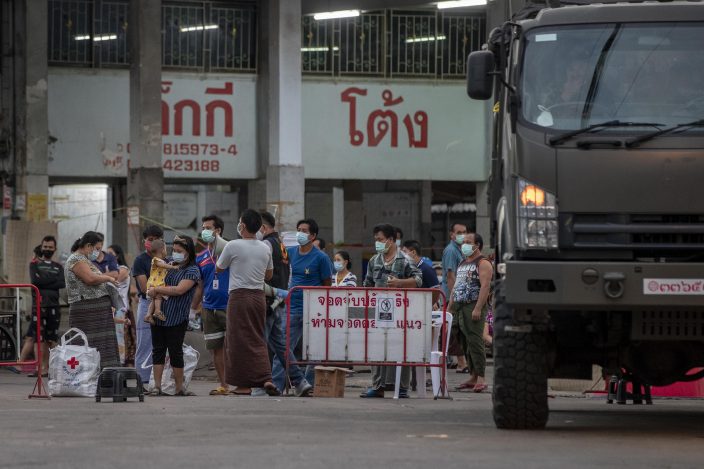 Migrant workers and their families are prepared to be taken to a field hospital for COVID-19 patents in Samut Sakhon, South of Bangkok, Thailand, Monday, Jan. 4, 2021, Thailand reported on Tuesday, Jan. 5, 2021 over 500 new coronavirus cases, most of them migrant workers who already were isolated, and the government said it was tightening movements of people around the country. (AP PhotoGemunu Amarasinghe)

Complicating its path to recovery, Thailand is playing catch-up in its bid to secure vaccines. Despite being a production hub for the Oxford-AstraZeneca vaccine, the government has yet to secure enough doses to cover its population of nearly 70 million people.

Thailand signed a joint-venture agreement with AstraZeneca in October to produce up to 200 million doses of the vaccine in the country but only has been able to secure 26 million doses for itself. Thailand expects those vaccines, which will be produced locally by Siam Bioscience, to be delivered in June.

Prime Minister Prayuth Chan-ocha said Monday that Thailand is trying to obtain 63 million doses, enough to cover slightly less than half of its population. The cabinet on Tuesday approved a $39 million budget for the vaccines, which will be offered at no charge to Thai citizens. 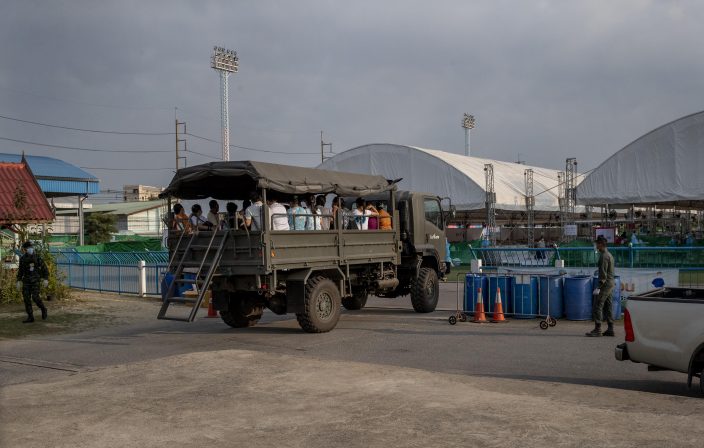 A truck carrying migrant workers and their families enter a field hospital for COVID-19 patents Monday, Jan. 4, 2021, in Samut Sakhon, South of Bangkok, Thailand. Thailand reported on Tuesday, Jan. 5, 2021, over 500 new coronavirus cases, most of them migrant workers who already were isolated, and the government said it was tightening movements of people around the country. (AP PhotoGemunu Amarasinghe)

Meanwhile, China’s Sinovac Biotech is expected to provide Thailand with 2 million vaccine doses, with an initial batch of 200,000 set to arrive in February, and later shipments expected in March and April.

“I hope they arrive soon. There are so many cases right now it’s terrifying,” said Watee Kongsilp, a street fruit seller in Bangkok.

Cin Amornchainon, an office worker, added: “If you ask me whether our vaccine orders are slower than other countries, yes they are. But I understand the limitations our country has in terms of budget.”

Neighboring countries in Southeast Asia, including Malaysia, Myanmar, the Philippines, Vietnam and Cambodia, also are scrambling to procure vaccines.

Indonesia has been negotiating for months to secure millions of doses for its nearly 270 million people. It has deals with Sinovac, Novavax, AstraZeneca and COVAX and is in talks with Pfizer. Vietnam is still negotiating with pharmaceutical companies and trying to develop its own vaccines. Malaysia has signed deals to cover up to 40 percent of its population.

For now, Thailand is bracing for case numbers to continue to rise.

The Thai Navy has built four emergency field hospitals around the country, with up to 4,000 beds in Samut Sakhon and at least 500 beds in Rayong, on the eastern seaboard. Hospitals and expansions are also planned for Chantaburi and Chonburi, two coastal provinces southeast of Bangkok.

Prayuth, seeking to balance public health concerns with economic realities, has implemented a new round of restrictions, but he has stopped short of putting the country under a full lockdown, similar to what it experienced in the spring.

The economic concerns are daunting: Thailand’s closure to most international travel helped limit domestic coronavirus outbreaks but gutted the tourism industry, which accounts for about a tenth of the economy and provides many jobs. The Bank of Thailand estimates the economy contracted 6.6% in 2020.

“We don’t want to lock down the entire country because we know what the problems are. So can you all lock down yourselves?” Prayuth said at a press briefing on Monday.

“This is up to everyone. If you don’t want to get infected, just stay home for 14 to 15 days. If you think like this, then things will be safe and easier for screening,” Prayuth added.

On Jan. 3, the prime minister signed an order designating 28 provinces, including the capital, as “highly controlled zones,” where public gatherings are prohibited and many businesses and other venues must close until at least the end of January. These include schools, gyms, childcare centers, Internet cafes, massage parlors and more.

Restaurants may not serve alcohol and can operate with strict social distancing requirements from 6 a.m. to 9 p.m. but only serve takeaway from 9 p.m. to 6 a.m. Tables must be at least 1.5 meters (5 feet) apart.

“We’ve learned the lessons from the previous lockdown,” said Taweesilp Visanuyothin, a spokesperson for the COVID-19 coordinating center. “We have to consider imposing the measures as well as the impact on the economy.”

The cabinet is expected to extend a national state of emergency, due to end on Jan. 15, until Feb. 28.

As has been true elsewhere, small lapses can be costly.

Thailand recorded no new local infections from May 26 until Nov. 7, when two women who crossed the border illegally from Myanmar tested positive for the virus, setting authorities off on a frantic contact-tracing effort. Thailand and Myanmar, which has been hit harder by the virus, share a 2,400-kilometer (1,500-mile) porous border.

Cambodia, which borders Thailand to the east and has been relatively lightly affected, stepped up security at land border checkpoints after at least 17 Cambodian laborers returning from Thailand recently tested positive for the coronavirus.