The insurrection at the U.S. Capitol was both stunning and predictable, the result of a Republican Party that has repeatedly enabled President Donald Trump's destructive behavior.

When Trump was a presidential candidate in 2016, Republican officials ignored his call to supporters to “knock the crap out” of protesters. Less than a year after he took office, GOP leaders argued he was taken out of context when he said there were “very fine people” on both sides of a deadly white supremacist rally.

And last summer, most party leaders looked the other way when Trump had hundreds of peaceful protesters forcibly removed from a demonstration near the White House so he could pose with a Bible in front of a church. 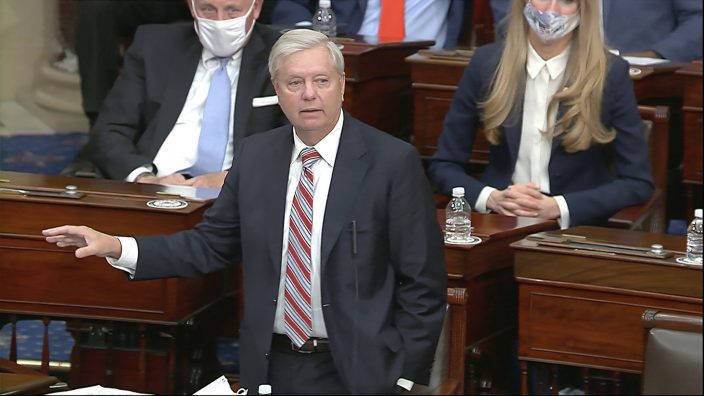 In this image from video, Sen. Lindsey Graham, R-S.C., speaks as the Senate reconvenes to debate the objection to confirm the Electoral College Vote from Arizona, after protesters stormed into the U.S. Capitol on Wednesday, Jan. 6, 2021. (Senate Television via AP)

But the violent siege on Capitol Hill offers a new, and perhaps final, moment of reckoning for the GOP. The party's usual excuses for Trump — he's not a typical politician and is uninterested in hewing to Washington's niceties — fell short against images of mobs occupying some of American democracy's most sacred spaces.

The party, which has been defined over the past four years by its loyalty to Trump, began recalibrating in the aftermath of Wednesday’s chaos.

One of his closest allies in Congress, GOP Sen. Lindsey Graham of South Carolina, said “enough is enough.” 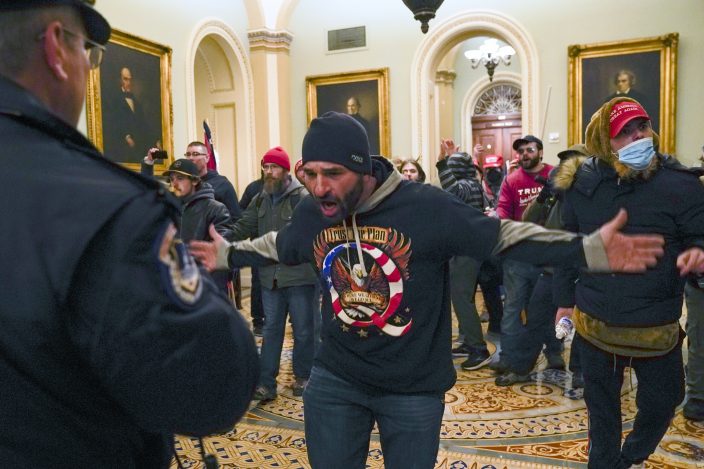 Trump supporters gesture to U.S. Capitol Police in the hallway outside of the Senate chamber at the Capitol in Washington, Wednesday, Jan. 6, 2021. (AP PhotoManuel Balce Ceneta)

At least one senior White House staffer resigned, and more resignations were possible as the weight of the day's events settled in.

But for the party to move forward, it will need to grapple with the reality that Trump in fact lost to President-elect Joe Biden by more than 7 million votes and a 306-232 margin in the Electoral College. 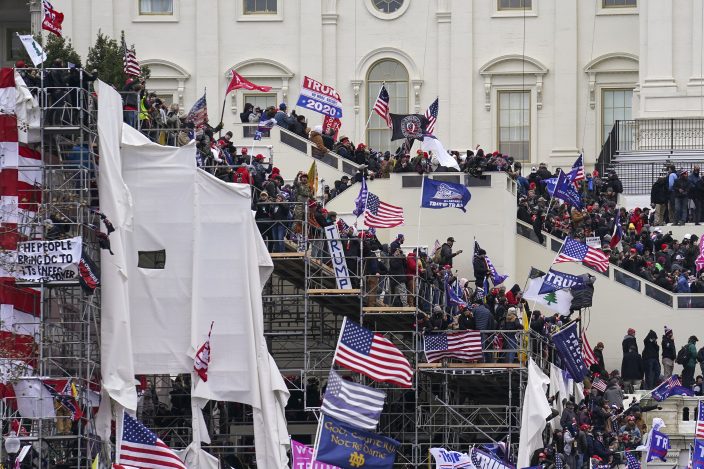 Former Republican President George W. Bush described the violent mob as “a sickening and heartbreaking sight." He declined to call out Trump or his allies, but the implication was clear when Bush said the siege “was undertaken by people whose passions have been inflamed by falsehoods and false hopes.”

Rep. Liz Cheney of Wyoming, a top House Republican and the daughter of Bush's vice president, was much more direct in an interview on Fox News.

“There's no question the president formed the mob. The president incited the mob," Cheney said. “He lit the flame.”

While their criticism was searing, Bush and Cheney were already among a smaller group of Republican officials willing to condemn Trump's most outrageous behavior at times. The overwhelming majority of the GOP has been far more reserved, eager to keep Trump's fiery base on their side.

Still, Trump's grip on his party appeared somewhat weakened when members of Congress returned to the Capitol Wednesday night, having spent several hours hiding in secure locations after being evacuated. Before they left, a handful of Republican senators and more than 100 Republican House members were set to oppose the vote to certify Joe Biden's presidential victory.

It was a move led by Texas Sen. Ted Cruz and Missouri Sen. Josh Hawley, each with his own 2024 presidential ambitions, over the objection of Senate Majority Leader Mitch McConnell, who warned that that U.S. democracy “would enter a death spiral” if Congress rejected state election results.

When they resumed debate, however, much of the energy behind the extraordinary push had fizzled. Several Republicans dropped their objections altogether. Hawley and Cruz did not, but they offered scaled-back arguments.

Hawley condemned the day's violence but also called for an investigation into “irregularities and fraud.” Earlier in the day, his hometown newspaper, The Kansas City Star, released an editorial charging that Hawley “has blood on his hands" for enabling Trump's false claims.

Others Republicans were clearly more concerned about the day's violence and the events that preceded them.

“Dear MAGA- I am one of you,” former White House aide Alyssa Farah tweeted. “But I need you to hear me: the Election was NOT stolen. We lost.”

Jefferson Thomas, who led Trump’s campaign in Colorado, expressed some regret about joining Trump’s team in the first place, calling Wednesday’s events “an embarrassment to our country.”

“This isn’t what I ever imagined when I signed up to #MAGA. Had I known then that this is how it would end, I never would’ve joined,” he wrote on Twitter.

And while there were obvious cracks in Trump's grip on the Republican Party, his fiercest detractors came from a familiar pool of frequent critics.

Trump's former secretary of defense, James Mattis, who denounced the president as a threat to the Constitution last year, described the violent assault on the Capitol as “an effort to subjugate American democracy by mob rule, was fomented by Mr. Trump.”

“His use of the presidency to destroy trust in our election and to poison our fellow citizens has been enabled by pseudo political leaders whose names will live in infamy as profiles in cowardice,” Mattis charged.

Anthony Scaramucci, a former Trump, often has harsh words for Trump, but offered his harshest on Wednesday for Trump's Republican enablers.

“Republican elected officials still supporting Trump need to be tried alongside of him for treason,” he tweeted.

RNC maintains right to use Trump's name in fundraising

'He's on his own': Some Republicans begin to flee from Trump

GOP increasingly accepts Trump's defeat — but not in public