Nurses say that being forced to take on more patients is pushing them to the brink of burnout and affecting patient care.

At least 250 of about 400 hospitals in California have been granted 60-day waivers. They allow ICU nurses to care for three instead of two people and emergency room nurses to oversee six patients instead of three. 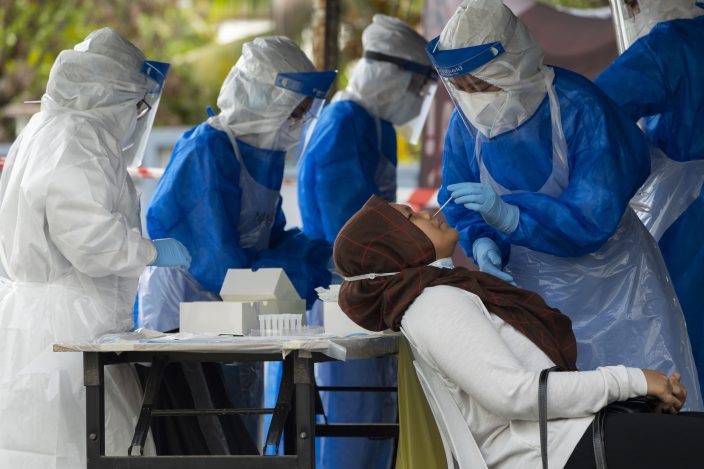 Nurses in other states have demanded law-mandated ratios like those in California but so far have failed to get them.

— US registering highest deaths yet from the coronavirus 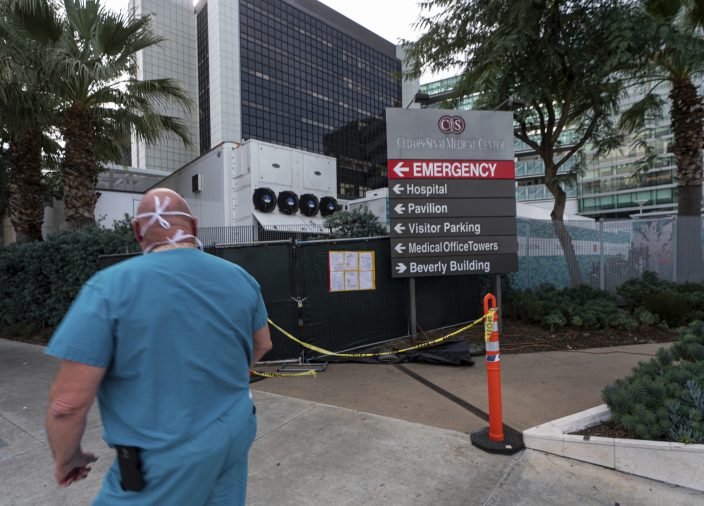 A medical worker walks past a refrigerated trailer parked outside the Cedars-Sinai Medical Center in Los Angeles Thursday, Jan. 7, 2021. California health authorities reported Thursday 583 new deaths and a record two-day total of 1,042. The state has deployed 88 refrigerated trailers, up from 60 a few weeks ago, for use as makeshift morgues, mostly in hard-hit Southern California. (AP PhotoDamian Dovarganes)

— Britain’s National Health Service will from next week employ a little-used field hospital specially built at a huge exhibition center in east London in the early days of the coronavirus pandemic last spring.

— Facing criticism over a slow roll out of virus vaccines -- with barely 500 people vaccinated in the first week — France’s government has pledged to speed up jabs for the elderly. 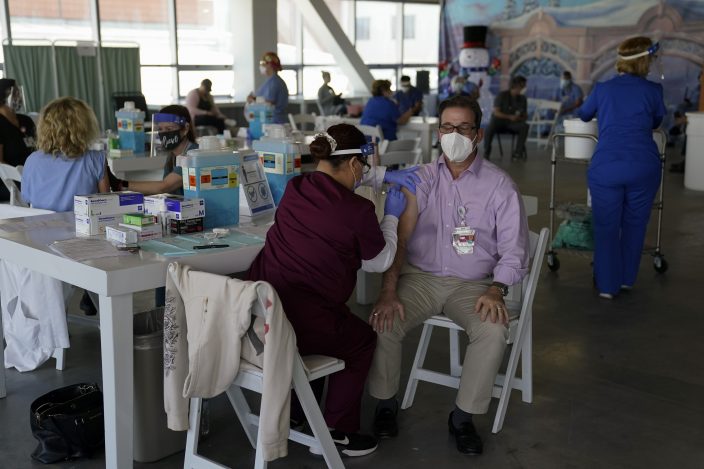 — South Africa says it will import 1.5 million doses of the AstraZeneca vaccine to inoculate the country’s health workers. 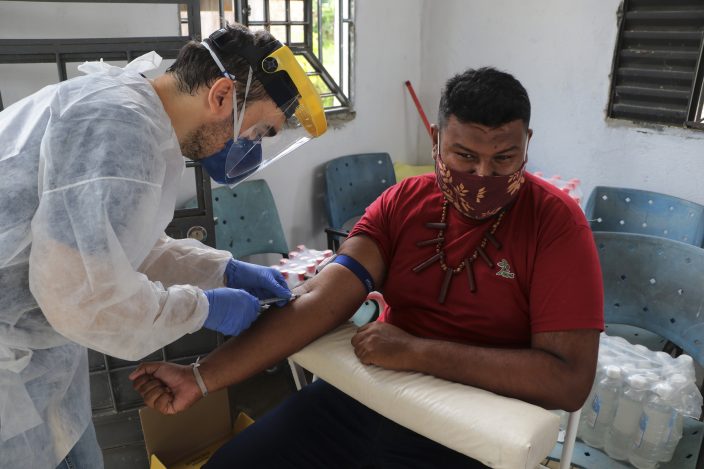 A health worker tests Icaro de Oliveira of the Mura indigenous group for COVID-19, at the Indigenous Park, a tribal community in the outskirts of Manaus, Amazonas state, Brazil, Thursday, Jan. 7, 2021. Medical teams are scrambling to assist indigenous people living in outlying areas of Manaus, where medical care is scarce after authorities issued a "State of Emergency" due to rising numbers of infection numbers in Amazonas State. (AP PhotoEdmar Barros)

SACRAMENTO, Calif. -- California’s massive coronavirus outbreak is taking a toll both on hospitals and those who staff them.

Nurses at one hospital in the city of Orange say they are seeing a couple of deaths daily in the COVID-19 wards.

Donna Rottschafer, a nurse at St. Joseph Hospital, says she has seen more people die in recent weeks than in decades of nursing.

California on Thursday reported 583 new deaths. There have been more than 28,000 deaths in the state since the start of the pandemic.

Hospitals in many areas have no more ICU beds available for COVID-19 patients. Officials say they are worried that holiday gatherings could swell the hospital population further in the next few weeks.

BEIJING — A city in northern China is offering rewards of 500 yuan ($77) for anyone who reports on a resident who has not taken a coronavirus test.

The offer from the government of Nangong comes as millions in the city and the surrounding province of Hebei are being tested as part of efforts to control China’s most serious recent outbreak of infections.

The offering of rewards for information on political or social nonconformists has a long history in China.

China has largely controlled local transmission of the virus through the use of measures considered by some to be extreme and highly intrusive, including lockdowns of entire cities, close electronic monitoring of people’s movements and bans on traveling to and from parts of the country.

CANBERRA, Australia — Australia is almost halving the number of passengers allowed to arrive by plane in a bid to prevent the spread of a highly contagious variant of the coronavirus first identified in Britain.

A cleaner at a Brisbane quarantine hotel diagnosed with COVID-19 on Wednesday is the first person infected with the variant found in the Australian community. Other cases have been detected among travelers while in hotel quarantine, where there is little risk of community spread.

Prime Minister Scott Morrison said Friday that state leaders have agreed that international arrivals to New South Wales, Queensland and Western Australia state airports will be halved until Feb. 15. Arrivals at Victoria were already relatively low and will remain unchanged.

Quarantine workers would be tested for the virus daily.

Officials also reported a near-record of 1,044 more deaths. The country has recorded about 1.49 million infections and over 131,000 deaths so far in the pandemic.

Experts say Mexico’s extremely low testing rate means that is an undercount, and official estimates suggest the real death toll is over 180,000.

In Mexico City, the current center of the pandemic in Mexico, 89% percent of hospital beds are full.

LONDON — The British government says that beginning next week all people arriving from other countries will have to provide proof of a negative coronavius test taken within the 72 hours before departure.

There are exemptions for some, including truckers, airline crew and children under 11.

Many public health experts have long urged the U.K. to adopt the measure as a way of reducing imported infections, though the virus is more widespread in Britain than in many other countries.

The government said Friday that the new measure will help protect against new variants of the virus, such as one recently identified in South Africa.

CARSON CITY, Nev. -- Nevada officials are reporting the most new coronavirus cases in a single day since the start of the pandemic.

Nevada pandemic response director Caleb Cage predicted the spike earlier in the week and said it mirrored other post-holiday rises the state has experienced.

Nevada has consistently rewritten its record books for coronavirus cases, deaths and hospitalizations throughout the months-long surge that has spared no county, rural or urban. Gov. Steve Sisolak’s tightened restrictions on business capacity and private gatherings are set to expire on Jan. 15, unless he extends them.

BRISBANE, Australia — Authorities in Brisbane, Australia, are locking the city down for three days beginning Friday, after a cleaner at a quarantine hotel was diagnosed with a highly contagious variant of the coronavirus first identified in Britain.

The Queensland state government says masks will also be compulsory for the first time in Brisbane and the surrounding municipalities of Logan, Ipswich, Moreton Bay and Redlands.

While several cases of the variant have been found in travelers in hotel quarantine, the cleaner is the first person to be infected with it in Australia. Authorities believe the woman was infectious after Jan. 2. She tested positive after showing symptoms Wednesday.

TOPEKA, Kan. — Kansas expects to finish giving coronavirus vaccinations to long-term care residents and health care workers by the end of this month and has moved people aged 65 and older into the next group to receive the shots.

Gov. Laura Kelly on Thursday announced new details about the order in which the state’s residents will be eligible for inoculations.

Making people ages 65 to 74 an earlier priority was the biggest shift. The state’s previous plan had that age group getting theirs after people in “congregate” living, such as state hospitals, shelters for the homeless, and prisons.

SAO PAULO — Brazil has passed 200,000 deaths from the coronavirus pandemic. That is the second highest total in the world.

The health ministry said Thursday that the country had 1,524 deaths in the previous 24 hours, rising to a total of 200,498 for the pandemic.

The milestone was reached as Brazilians are once again crowding their beaches.

Many Brazilians have been straining against quarantine for months, going to bars or small gatherings with friends, but massive blowouts had been few and far between since the pandemic began. Then big festivities kicked off after the Southern Hemisphere’s summer started Dec. 21.

The Latest: Germany sees drop in new cases levelling off

The Latest: UK invests in studies of long COVID-19 syndrome