BEIJING — COVID vaccine shots will be free in China, where more than 9 million doses have been given to date, health officials in Beijing said Saturday.

“Ordinary people will not need to spend a penny,” Zheng Zhongwei, a National Health Commission official, said at a news conference.

The announcement cleared up confusion from a news conference nine days ago at which Zheng said it would be affordable, and a more senior official, Vice Minister Zeng Yixin, jumped in to say it would be free. 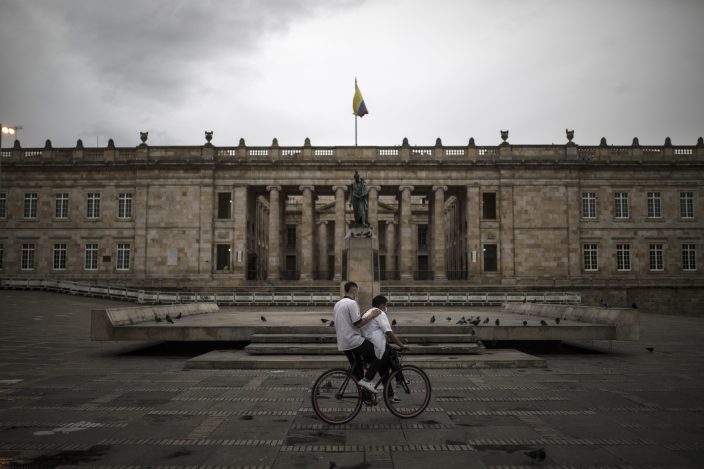 Two young men, wearing protective face masks, ride a bike through Bolivar Square during an official continuous multi-day curfew in an effort to contain the increase of COVID-19 infections, in Bogota, Colombia, Friday, Jan. 8, 2021. The circulation of people and vehicles is restricted until Jan. 12. (AP PhotoIvan Valencia)

The costs will be covered by a national medical insurance fund and government funds. About 7.4 million shots have been given since a drive began Dec. 15 to inoculate medical and transport workers and other key groups ahead of Lunar New Year, a major holiday in mid-February. More than 1.6 million shots had been given in previous months.

Zeng, the vice minister, said the specific timing for a visit by a WHO expert team on the origins of the virus is being determined and that it would be joined by Chinese experts in Wuhan, the city where cases of the new coronavirus were first detected in late 2019.

WHO head Tedros Adhanom Ghebreyesus expressed disappointment earlier this week that the Chinese side had not finalized the needed permissions for the visit. Two team members who were already en route had to turn back. Tedros said in Geneva on Friday that he expects the dates to be set next week. 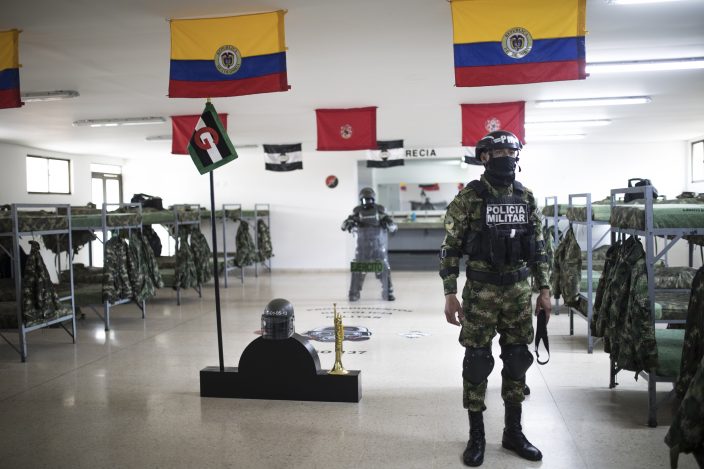 A police officer waits to be assigned during an official continuous multi-day curfew in an effort to contain the increase of COVID-19 infections, in Bogota, Colombia, Friday, Jan. 8, 2021. The circulation of people and vehicles is restricted until Jan. 12. (AP PhotoIvan Valencia)

— With virus surging, Biden to speed release of COVID vaccines 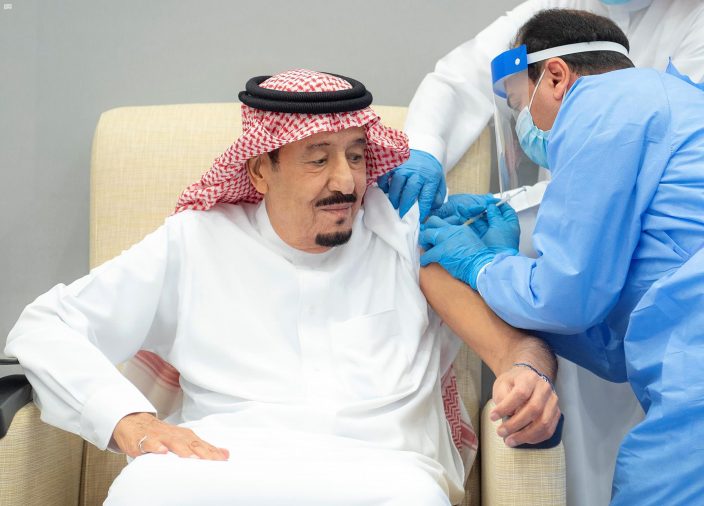 — London’s mayor has declared the capital’s COVID-19 situation to be critical, reflecting deteriorating conditions for beleaguered hospitals, as the country recorded its highest daily death toll in the pandemic.

— Greece has extended a two-month lockdown by at least one week, through Jan. 18, and announced plans to increase the number of people getting COVID-19 vaccines from 5,000 to 8,000 per day.

— New research suggests the COVID-19 vaccine made by Pfizer and BioNTech can still work against a mutated coronavirus.

BEIJING — Chinese authorities are asking residents in two cities south of Beijing to stay home for seven days as they try to stamp out a coronavirus outbreak in which more than 300 people have tested positive in the past week.

According to official notices on social media, the cities of Shijiazhuang and Xingtai in Hebei province are restricting people to their communities and villages and have banned gatherings.

Hebei reported 14 newly confirmed cases in the latest 24-hour period, bringing the total in the outbreak to 137. It has found 197 other people without symptoms who also tested positive. China does not include asymptomatic cases in its confirmed count.

Beijing is requiring workers from Hebei to show proof of employment in Beijing and a negative virus test before entering the capital.

MEXICO CITY — Mexico has posted its third straight day of a new high for coronavirus infections, with 14,362 newly confirmed cases and a near-record of 1,038 more deaths.

The country has now topped 1.5 million total infections and over 132,000 deaths so far in the pandemic.

The country’s extremely low testing rate means that is an undercount, and official estimates suggest the real death toll is over 180,000.

Officials say 6,623 people were vaccinated against the coronavirus Friday, a rate similar to previous days.

Mexico has received only about 107,000 doses of the Pfizer vaccine, and has pinned much of its hopes on cheaper, easier-to-handle vaccines made by China’s CanSino, though that vaccine has not yet been approved for use.

SAN DIEGO — San Diego County is opening what it calls a “vaccination super station” that aims to inoculate up to 5,000 health care workers daily with a coronavirus vaccine.

The effort that begins Monday is one of the most ambitious yet in California to accelerate the pace of vaccinations that Gov. Gavin Newsom said this week was “not good enough.” Only about 1% of California’s 40 million residents have been vaccinated against the virus.

Medical crews from the University of California, San Diego, will operate the station in a parking lot near the downtown baseball stadium.

Health care workers will remain in their vehicles while they are given the shot and then will be asked to remain on-site for 15 minutes to be monitored in case of any allergic reaction.

MISSION, Kan. — Kansas state prisons, which have been hit hard by the coronavirus pandemic, will be given priority in the next phase of vaccinations.

Officials have reported 5,320 coronavirus infections in the state’s prison system, which houses about 8,600 inmates. In addition, 1,076 prison employees have tested positive. Thirteen inmates and four staff members have died.

Gov. Laura Kelly said Thursday that inmates will be vaccinated after health care workers and residents of long-term care facilities. She says the prisons are being prioritized based on guidance from doctors and public health experts.

ALBANY, N.Y. — Faced with mounting criticism over the slow pace of the coronavirus vaccine rollout, New York Gov. Andrew Cuomo says that starting next week, the state will allow a much wider swath of the public to get inoculated, including anyone age 75 or older.

The governor warned Friday that initially, the supply of vaccines available to people other than health care workers and nursing home patients will be very limited.

The announcement came as many local officials argued it was time to distribute the vaccine beyond health care workers.

BISMARCK, N.D. — North Dakota Lt. Gov. Brent Sanford is in quarantine with his family after his wife tested positive for COVID-19, and he will not be able to fulfill his role of presiding over the Senate as the 2021 legislative session is getting underway.

Sanford’s spokesman, Mike Nowatzki, told the Bismarck Tribune that Sanford’s wife is asymptomatic and that Sanford planned to get his own COVID-19 test Friday, the session’s second day.

Nowatzki said Sanford is not showing any symptoms and is expected to return around the end of January.

Senate Majority Leader Rich Wardner, a Dickinson Republican, said senators haven’t been around Sanford or in meetings with him.

Sanford attended a joint legislative session on Tuesday, when Gov. Doug Burgum presented his State of the State address. Nowatzki said Burgum was not a close contact of Sanford, and that Sanford wore a mask the whole time and was socially distanced while seated in the chambers.

ATLANTA — Georgia ranks last among states for the share of available COVID-19 vaccines that it has administered, but Gov. Brian Kemp said the data is badly misleading as some hospitals have failed to report all the shots they’ve given.

Still, the Republican governor acknowledged Friday that the state is struggling with the vaccine rollout even as Georgia sets daily records for people hospitalized with the respiratory illness.

Kemp says he’s “not happy” with the effort. Georgia now has the capacity to administer 11,428 doses a day. At that rate, it would take more than two-and-a-half years to vaccinate every Georgia resident.

Amber Schmidtke, an epidemiologist who reports daily on Georgia’s outbreak, blamed the staggering start on “poor planning and execution of a mass vaccination strategy, if Georgia ever actually had one.” She said state government needs to call in more resources instead of pushing all the responsibility down to its 18 public health districts.

The struggles come even as the state is allowing people over 65 to be vaccinated starting Monday, leading to local health departments being overrun with people seeking appointments.

CHICAGO — Some in-person instruction at Chicago public schools will resume Monday for the first time in months, and the city’s mayor and school chief are warning teachers that their absence will have consequences.

The district is giving families the option for students in pre-kindergarten and some special education programs. K-8 students could return on Feb. 1. No date has been set for high school students.

About 6,500 students are expected Monday, still a fraction of the nation’s third-largest district.

Mayor Lori Lightfoot said Friday that remote learning “is not sustainable, not over the long term, because it does not serve every student equally, especially those students who are younger, who require additional help and support and simply don’t have access to a sustainable learning environment.”

The Chicago Teachers Union said many schools still carry risks for the coronavirus. Attendance by teachers this week has been uneven.