WELLINGTON, New Zealand — The small Pacific nation of Micronesia has reported its first case of the coronavirus after a crewmember on an arriving ship tested positive.

Home to 100,000 people, Micronesia had been among a dwindling handful of island nations to have avoided the virus altogether.

In an address to the nation, President David Panuelo said many people had heard the “alarming news” but the case has been contained at the border. 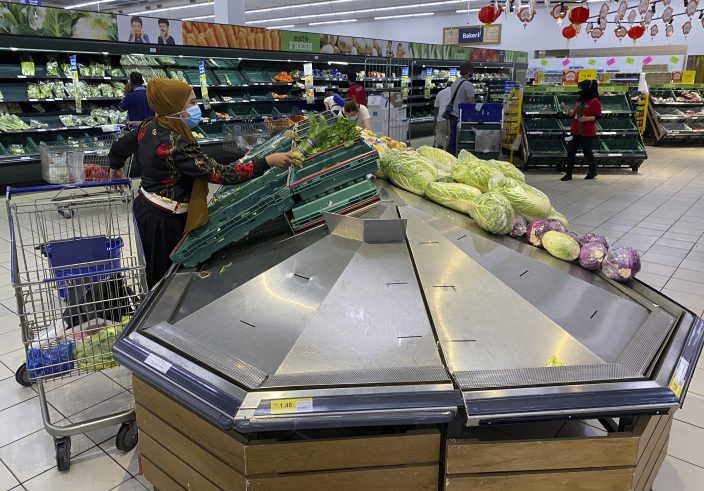 A woman shops for vegetables at a shopping mall in Kuala Lumpur, Malaysia, Tuesday, Jan. 12, 2021. Malaysia's king Tuesday approved a coronavirus emergency that will prorogue parliament and halt any bids to seek a general election in a political reprieve for embattled Prime Minister Muhyiddin Yassin. (AP PhotoVincent Thian)

Panuelo said one crewmember aboard the government ship Chief Mailo had tested positive after the ship had returned from the Philippines following more than a year of drydock repairs.

He said the crewmember has been isolated on board, that all other crew remain on board, and that the ship is being monitored daily by law enforcement. 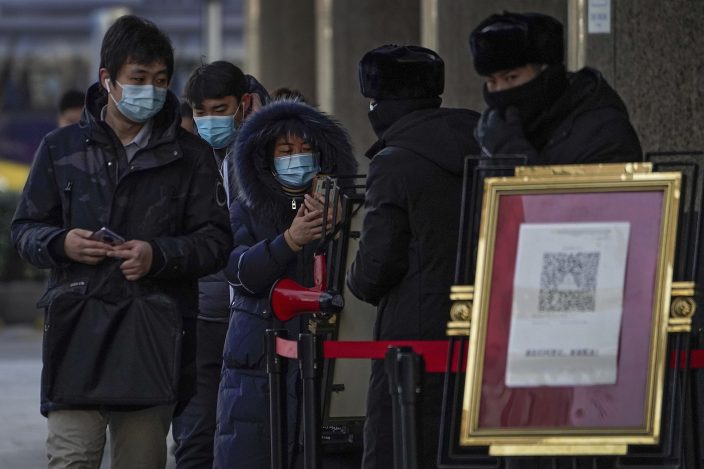 People wearing face masks to help curb the spread of the coronavirus use smartphones to scan their health code before entering an office building in Beijing, Tuesday, Jan. 12, 2021. Lockdowns have been expanded and a major political conference postponed in a province next to Beijing that is the scene of China's most serious recent COVID-19 outbreak. (AP PhotoAndy Wong)

— The U.S. is expanding the biggest vaccination drive in its history by opening football stadiums, major league ballparks, fairgrounds and convention centers to inoculate more people 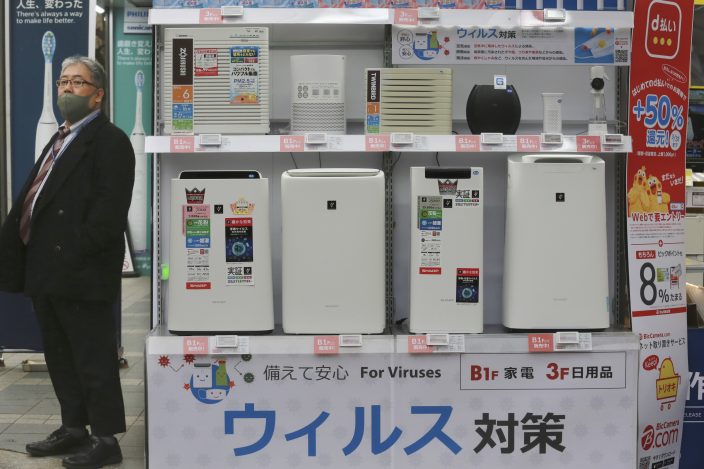 A man wearing a face mask to protest against the coronavirus stands beside a display of air cleaners at an electronics retailer in Tokyo, Tuesday, Jan. 12, 2021. The Tokyo area has been under a state of emergency since Friday to try to stop the spread of the virus. The banner at bottom reads: "Antivirus." (AP PhotoKoji Sasahara)

— The coronavirus death toll in California has reached 30,000, another staggering milestone as the nation’s most populous state endures the worst surge of the pandemic 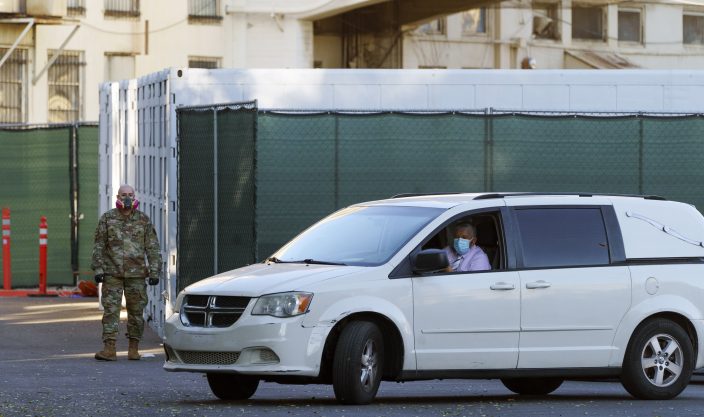 A member of the California National Guard stands next to refrigerated trailers as a funeral hearse driver exits the department of the Los Angeles County Coroner in Los Angeles, Monday, Jan. 11, 2021. The coronavirus death toll in California reached 30,000 on Monday, another staggering milestone as the nation's most populous state endures the worst surge of the nearly yearlong pandemic. (AP PhotoDamian Dovarganes)

Beginning Saturday, India will start the massive undertaking of inoculating an estimated 30 million doctors, nurses and other front-line workers. The effort will then turn to inoculating around 270 million people who are either older than 50 or have secondary health conditions that raise their risks of dying from COVID-19.

The first vaccine shipments contain the COVISHIELD vaccine made by the Serum Institute and developed by Oxford University and AstraZeneca.

WELLINGTON, New Zealand — New Zealand will soon require that travelers from most countries show negative coronavirus tests before they leave for New Zealand.

COVID-19 Response Minister Chris Hipkins says New Zealand is in a fortunate position to have stamped out community spread of the virus, but takes nothing for granted.

The new rules will require travelers to have a negative test within 72 hours of departure.

The rules will be imposed on travelers from the U.S. and the U.K. beginning Friday and most other countries soon after. Travelers from Australia and some Pacific nations will be exempted.

Until now, New Zealand has relied on placing new arrivals into a mandatory two-week quarantine.

CARSON CITY, Nev. — Nevada is making changes to its distribution plan for coronavirus vaccines in an effort to get shots into residents’ arms more quickly.

The state received its first vaccine shipment four weeks ago but has been struggling to get people inoculated at the rate officials initially anticipated.

The plan also lowers the age threshold for priority distribution from 75 to 70.

WASHINGTON — U.S. health officials have created a website to help people find where they can get antibody drugs for COVID-19, medicines that may help prevent serious illness and hospitalization if used early enough after infection occurs.

Two of these drugs — from Eli Lilly and Regeneron Pharmaceuticals — have been authorized for emergency use in the U.S. but red tape, health care staff shortages and other problems have prevented many patients and doctors from getting them.

Department of Health and Human Services officials said Monday that only 25% of the more than 641,000 treatment courses distributed to states and local health sites have been used as of last week.

A big problem has been finding a place that has the drugs. The web site includes a tool where people can find locations administering the treatment within 50 miles. Doctors will determine if patients meet the criteria. Treatment must start within 10 days of first symptoms.

The drugs are free, although people may be charged a fee for the IV infusion, a one-time treatment that takes about an hour.

HARTFORD, Conn. — Connecticut will open its first mass COVID-19 vaccination site at the University of Connecticut’s football stadium within the next 10 days as the state prepares to administer shots to residents ages 75 and older, Gov. Ned Lamont said Monday.

Rentschler Field in East Hartford will be providing mass vaccinations along with about a half-dozen other large sites that will open over the next two weeks to provide the shots, the governor said.

Vaccinations also will be available at private providers’ offices and health clinics. Connecticut also plans to offer the shots through mobile vaccination units for poor and other underserved communities.

Health care workers have been among the first to be vaccinated in Connecticut, and the state recently finished vaccinating nursing home residents.

Advanced registration for vaccinations for people 75 and older is scheduled to begin Thursday, with the group receiving shots beginning next Monday, Jan. 18.

ARLINGTON, Texas — Gov. Greg Abbott said Monday that Texas will be able to rapidly increase the rate of COVID-19 vaccinations by using new mass hubs for getting shots, but the effort is still limited by the supply of medicine coming from the federal government.

Texas is one of several states opening football stadiums, major league ballparks, fairgrounds and convention centers to inoculate a larger and more diverse pool of people.

The state has seen a surge in newly confirmed coronavirus cases, hospitalizations and deaths. State health officials report more than 13,000 coronavirus patients currently in hospitals statewide, and nearly 30,000 deaths since the pandemic started.

The site will fully transition to an around-the-clock operation at midnight. The goal is to vaccinate 6,000 people per day, Christ said.

“Today as we mark the opening of this facility, it’s my privilege as a medical doctor to administer some of the first doses of vaccine,” said Christ, who previously received both doses herself and reported no side effects.

ATLANTA — Georgia’s plan to expand access to the coronavirus vaccine for people over 65 is off to a rocky start.

The websites of at least two public health districts crashed Monday, and other districts reported overwhelming demand for appointments. The state was already struggling with its vaccine rollout before the latest woes.

Coastal Health District Director Lawton Davis said he understood people were frustrated, but health departments were stretched thin. Gov. Brian Kemp said Friday he wasn’t happy with the state’s progress in administering the vaccine, and officials had to “keep moving the needle.”

The state has now opened up vaccine access to law enforcement, firefighters and first responders in addition to people over 65.

BATON ROUGE, La. — Louisiana is boosting its distribution of coronavirus vaccines to the elderly.

The state on Monday increased the number of doses available to people ages 70 and older this week and expanded the locations where they can get the shots to include every parish of the state.

The Department of Health’s list of pharmacies offering the vaccine to the elderly numbered 107 last week. It has grown to 209 pharmacies and health clinics this week.

Gov. John Bel Edwards’s administration also is steering thousands more doses to the facilities for vaccinations of people 70 and older.

Demand remains certain to exceed supply. People need to make an appointment to get vaccinated.

SAN DIEGO — Several gorillas at the San Diego Zoo Safari Park have tested positive for the coronavirus in what is believed to be the first cases among such primates in captivity.

Lisa Peterson, the park’s executive director, told The Associated Press on Monday that eight gorillas at the park are believed to have the virus and several have been coughing.

It appears the infection came from a member of the park’s wildlife care team that also tested positive for the virus but has been asymptomatic. Veterinarians are closely monitoring the gorillas who are all together in their habitat at the park, north of San Diego.

The Latest: Austria, Denmark to work with Israel on vaccines