TRUMP’S FUTURE — With impeachment pressure mounting, the House is speeding ahead to try to oust President Trump from office. Democrats are pushing first for the vice president and Cabinet to invoke constitutional authority to remove Trump from office. After that, impeachment proceedings are set for Wednesday. By Lisa Mascaro, Darlene Superville and Mary Clare Jalonick. SENT: 1,010 words, photos, video. 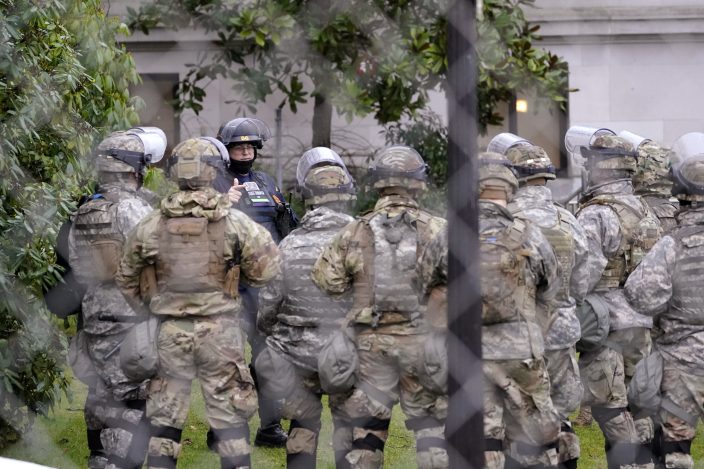 A Washington State Patrol trooper talks with members of the Washington National Guard inside a fence surrounding the Capitol in anticipation of protests Monday, Jan. 11, 2021, in Olympia, Wash. According to organizers, some protesters are unhappy the Legislature will meeting virtually and in sessions not open to the public, due to the COVID-19 pandemic, during the 2021 session which opens Monday. Washington Gov. Jay Inslee activated members of the National Guard this week to work with the Washington State Patrol to protect the Capitol campus. (AP PhotoTed S. Warren)

TRUMP-ANALYSIS — As the House closes in on impeaching President Donald Trump for a second time, it is becoming increasingly clear that he is not doing the job he angrily fought to retain. His transgressions, big and small — of norms, of leadership, of human decency — are casting a pall over his final days in office and, in the view of even close advisers, are indelibly staining his legacy. An AP News Analysis by Zeke Miller.

BIDEN INAUGURATION — The inauguration of President-elect Joe Biden will be held on the same risers in the same spot at the U.S. Capitol where a violent, pro-Trump mob descended last week. But the two events aren’t even comparable from a security standpoint, says Michael Plati, the U.S. Secret Service special agent in charge who is leading inauguration security. By Colleen Long and Alexandra Jaffe. SENT: 900 words, photos.

ISRAEL-PALESTINIANS-APARTHEID DEBATE — A leading Israeli human rights group has begun describing both Israel and its control of the Palestinian territories as a single “apartheid” regime. It’s an explosive term Israel’s government vehemently rejects. For a respected Israeli organization to adopt a term long seen as taboo even by many critics of Israel points to a broader shift in the debate over the Mideast conflict. SENT: 1180 words, photos.

VATICAN-JUSTICE — A criminal investigation into a Vatican real estate investment is exposing weaknesses in the city state’s judicial system and its limited protections for those accused. That’s highlighting the incompatibility of the Holy See’s procedures with European norms. The Vatican has never been a democracy, but the incongruity of a government that is a moral authority on the global stage and yet an absolute monarchy is becoming increasingly evident. One longtime papal adviser quit all his Holy See consulting roles to protest what he considered grave human rights violations in the probe of the 350 million-euro London real estate investment. Vatican prosecutors say the rights of the accused are being protected. By Nicole Winfield. SENT: 1,165, photos.

FEDERAL EXECUTIONS-MONTGOMERY — A judge has granted a stay in what was slated to be the U.S. government’s its first execution of a female inmate in more than 67 years. Lisa Montgomery killed 23-year-old Bobbie Jo Stinnett in December 2004, cut the baby from her womb and then passed off the newborn as her own. The Topeka Capital-Journal reports Judge Patrick Hanlon granted the stay late Monday. Her execution was scheduled for Tuesday at the Federal Correctional Complex in Terre Haute, Indiana, just eight days before the inauguration of Joe Biden — an opponent of the federal death penalty. Montgomery’s lawyers have argued that sexual abuse during Montgomery’s childhood led to mental illness. By Heather Hollingsworth. SENT: 960 words, photos.

HOTEL-CONFRONTATION — A white woman who wrongly accused a Black teenager of stealing her cellphone and tackled him at a New York City hotel appears to back off her apology in a TV interview. SENT: 510 words, photos.

MANATEE-TRUMP — State and federal wildlife officials are investigating reports of a manatee found with “Trump” drawn on its back in a Florida river. SENT: 190 words.

FBN--MEDAL OF FREEDOM-BELICHICK — New England Patriots coach Bill Belichick said on Monday night that he will not receive the Presidential Medal of Freedom. In a statement, Belichick said “remaining true to the people, team and country I love outweigh the benefits of any individual award.” SENT: 500 words, photos.

GREECE-VIRUS-OUTBREAK-BURIED-IN-ISOLATION — COVID-19 victims endure harrowing isolation before and after death in Thessaloniki, the city in Greece most acutely affected by the pandemic. Under rules set by city authorities, people who were infected with the virus must be buried in segregated plots at two local cemeteries. While the burial regulations add to the grief of survivors, some health experts question if they serve an actual public health purpose. SENT 620 words, photos.

VIRUS-OUTBREAK-MALAYSIA — Malaysia’s king has approved a coronavirus emergency that will suspend parliament and hold off calls for elections in a political reprieve for embattled Prime Minister Muhyiddin Yassin. Muhyiddin assured citizens the emergency was “not a military coup and curfew will not be enforced.” The emergency will last until Aug. 1 or earlier. But analysts wondered how much the emergency will help. They say it seems like a bid for Muhyiddin to hold power without parliamentary oversight. By EILEEN NG. SENT: 660, photos.

VIRUS OUTBREAK-GERMANY — A surge of coronavirus deaths in the eastern German state of Saxony has boosted business for Meissen crematorium. Normally the crematorium would have 70 to 100 caskets on site at this time of year, when the flu season takes its toll on the elderly. Now it has 300 bodies waiting to be cremated and each day dozens more are delivered to the modernist building on a hill overlooking this ancient town better known for its delicate porcelain and impressive Gothic castle. By Frank Jordans. UPCOMING: 700, photos.

IRAQ-FEMALE ENTREPRENEURS — Growing numbers of Iraqi women are finding some good under the movement restrictions imposed because of the coronavirus pandemic: They’re starting their own businesses from home. Using online shopping, social media and delivery services, they can by-pass some of the discrimination and harassment that often come with working in Iraq’s male-dominated, conservative society. SENT: 780 words, photos.

VIRUS-OUTBREAK-ASIA — India has started shipping COVID-19 vaccines to multiple cities, four days ahead of the nationwide inoculation drive. The first consignment of vaccines developed by the Serum Institute of India left the Indian city of Pune on Tuesday. Elsewhere in Asia, Micronesia has recorded its first case of the virus. And New Zealand will require a negative test for new arrivals from most countries. SENT: 780 words, photos.

VIRUS OUTBREAK-VIRAL QUESTIONS-VACCINES-INFECTED — Health experts say people who have had the coronavirus should still plan on getting a COVID-19 vaccine once it’s available to them. After someone recovers from a COVID-19 infection, their immune response should protect them from getting infected with the virus again right away. But scientists don’t know exactly how long this immunity lasts or how strong it is. SENT: 300 words, photos.

GOP DIVISION — The Republican Party is losing voters as it’s pulled in opposite directions after the attack on Congress by Trump loyalists. On one side are GOP voters disgusted with President Trump’s behavior. At the same time, Trump supporters argue the vast majority of the rank-and-file remains loyal. By Marc Levy, Thomas Beaumont and Nicholas Riccardi. SENT: 920 words, photos.

CAPITOL BREACH-NATIONAL GUARD-EXPLAINER — In the aftermath of the deadly riot at the Capitol last week, questions are being raised about why the District of Columbia National Guard played such a limited role as civilian law enforcement officers were outnumbered and overrun. Use of the Guard is a complicated process, tangled in an array of jurisdictional issues between city and federal agencies. By Lolita C. Baldor And Robert Burns. SENT: 1,060 words, photo.

INDONESIA-PLANE-CRASH — Indonesian navy divers are searching through plane debris and seabed mud for the black boxes of a Sriwijaya Air jet that crashed with 62 people aboard. A navy ship has picked up signals from the devices from the Boeing 737-500 that went down Saturday in the Java Sea. Searchers have also recovered human remains from the crash site. By Niniek Karmini and Andi Jatmiko. SENT: 570 words, photos.

WILDFIRES-DEADLY SMOKE — Researchers say in a new study that wildfire smoke accounted for up to half of all small particle air pollution in parts of the western U.S. in recent years. The researchers from Stanford University and the University of California, San Diego used satellite images and air quality data to model how much pollution was generated by fires. They found that even as pollution from other sources in western states declined, the amount from fires increased sharply. SENT: 640 words, photo.

FORT-HOOD-VIOLENCE — The U.S. Army’s top enlisted officer visited Fort Hood in recent days to listen to soldiers’ concerns and check on progress at the base. He was met with skepticism at a base that’s been stricken with violence and eroded morale in the past year. A December report by an independent review panel highlighted high rates of assault and harassment, leadership problems and issues with the criminal investigation division at Fort Hood. SENT: 870, photos.

DEATH ROW EXONERATION-MISSISSIPPI — A Mississippi judge has dismissed a murder charge against a Black man who spent more than a quarter-century on death row. Eddie Lee Howard was convicted of capital murder in the 1992 stabbing death of an 84-year-old woman. District Attorney Scott Colom says a dentist’s bite-mark testimony used to convict Howard has been discredited. SENT: 630 words.

FINANCIAL-MARKETS — Asian stocks are mixed as investors watch for details of President-elect Joe Biden’s proposed economic stimulus plan. Regional heavyweights Shanghai, Tokyo and Hong Kong advanced while Sydney, Seoul and Southeast Asian markets retreated. Wall Street closed lower after a record-setting run. The worsening pandemic is hurting the U.S. economy, but Biden has promised more government spending after he takes office Jan. 20. Investors appeared to be encouraged by the rollout of coronavirus vaccines. Markets shrugged off the attack on the Capitol in Washington. By Joe McDonald. SENT: 550 words, photo.

FILM-GOTHAM AWARDS — Streaming from an empty banquet hall and with acceptance speeches made from living rooms, the 30th Gotham Awards gave a very strange Oscar season a virtual start Monday. The ceremony ultimately crowned Chloe Zhao’s “Nomadland” the best film of 2020. As the first prominent award show to go forward during the pandemic, the Gotham Awards took a trial-and-error approach to mounting a show that couldn’t include the usual trappings of the annual independent film awards: a flashy red carpet, free-flowing cocktails, standing ovations. By Jake Coyle. SENT: 730 words, photos.

FBC-NATIONAL-CHAMPIONSHIP — No. 1 Alabama has won the national championship game, 52-24 against No. 3 Ohio State. It was the final game of a season played entirely in a pandemic. Alabama went 13-0 as coach Nick Saban won his seventh national championship and sixth as coach of the Crimson Tide, all in the last 12 years. Justin Fields and the banged-up Buckeyes just could not keep up. Smith, the Heisman Trophy winner, had catches for 12 catches for 215 yards and three touchdowns, all in the first half. By Ralph D. Russo. SENT: 960 words, photos.