The NFL has never seen a playoff matchup quite like the upcoming one between Tom Brady’s Tampa Bay Buccaneers and Drew Brees’ New Orleans Saints.

A pair of quarterbacks in their 40s still thriving on the playoff stage at an age when nearly every other great passer in NFL history was already enjoying retirement.

Brees will take the field for the Saints on Sunday two days after turning 42 as the young gun in this matchup against the 43-year-old Brady, who has shattered nearly every record for longevity in the NFL. 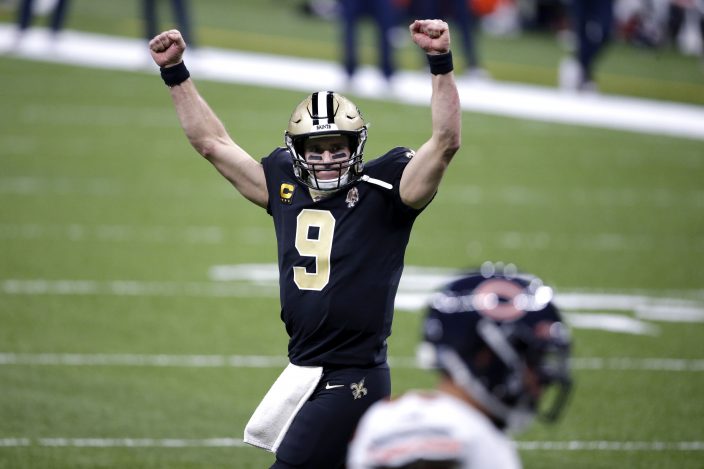 New Orleans Saints quarterback Drew Brees (9) reacts after a touchdown by Alvin Kamara in the second half of an NFL wild-card playoff football game against the Chicago Bears in New Orleans, Sunday, Jan. 10, 2021. (AP PhotoButch Dill)

Brees has thrown for more yards than any QB in the regular season with 80,358 and ranks second in TD passes with 571. Brady holds the mark for touchdowns with 581 and trails only Brees in yardage with 79,204.

This marks just the second time since at least 1950 that the NFL’s top two players in career yards passing will meet in the playoffs. Second-ranked John Elway’s Denver Broncos beat then-leader Dan Marino and the Dolphins 38-3 in the divisional round following the 1998 season.

This will be the first time since at least 1950 that the two career leaders in TD passes will meet in the postseason.

The combined age of the starting quarterbacks will be an NFL-record 85, surpassing the 84 from their two starts in the regular season this season. The previous playoff record for combined age of starting QBs was 78 when 41-year-old Brady outdueled 37-year-old Philip Rivers two years ago in the divisional round.

Brady, who is seeking his record seventh Super Bowl title and 10th appearance, has already lapped the field when it comes to playoff wins. He won his 31st postseason start last week and can double second-place Joe Montana’s career total of 16 this week. Brady’s 75 TD passes in the playoffs are already 30 more than Montana had.

THIRD TIME’S A CHARM: It turns out it’s easier to beat the same team three times in a season than it is to win in the playoffs after getting swept in the regular season.

The Saints-Bucs game marks the 23rd postseason matchup in the Super Bowl era after one team swept the season series like New Orleans did against Tampa Bay.

The team that swept the regular season series won 14 of the previous 22 matchups, which bodes well for the Saints this week.

The Saints were on the right side of one of these matchups the last time it happened, beating Carolina 31-26 in the wild-card round after sweeping the Panthers in the 2017 regular season.

The last time a team reversed a regular season sweep in the playoffs came in the 2007 playoffs when the Giants did it against Dallas in a postseason run all too familiar to Brady. Eli Manning and New York then won the NFC title game in Green Bay and beat Brady and the Patriots in the Super Bowl, spoiling New England’s bid for a perfect 19-0 season.

YOUNG GUNS: While the old guys are dominating the NFC playoffs, the AFC is highlighting the next generation of star quarterbacks.

When Buffalo hosts Baltimore on Saturday night it will be a matchup of a pair of 24-year-old quarterbacks in Josh Allen of the Bills and Lamar Jackson of the Ravens.

The quarterbacks taking the field the next day in Kansas City are each a year older with Patrick Mahomes of the Chiefs facing Cleveland’s Baker Mayfield.

This will be the first time a conference will have four quarterbacks age 25 or younger start on same the weekend of the playoffs.

STREAKING: The Ravens had one impressive streak extended last week while another was snapped. J.K. Dobbins ran for a TD in his seventh straight game in Baltimore’s 20-13 win over Tennessee, tied for the second longest streak ever for a rookie. Only Jacksonville’s Maurice Jones-Drew has a longer one, having done it eight games in a row in 2006.

10-win team to miss playoffs in AFC despite expanded field