Will Pucovski has been ruled of the series decider against India because of a shoulder injury he sustained while fielding in his test debut for Australia.

Marcus Harris has been drafted into the starting XI and will open the batting with David Warner at the Gabba in the fourth test starting Friday.

It’s the only change to Australia’s lineup from a dramatic third test that ended Monday in a draw at the Sydney Cricket Ground. India will also be forced into changes because of injuries. The series is tied 1-1 with one match to go. 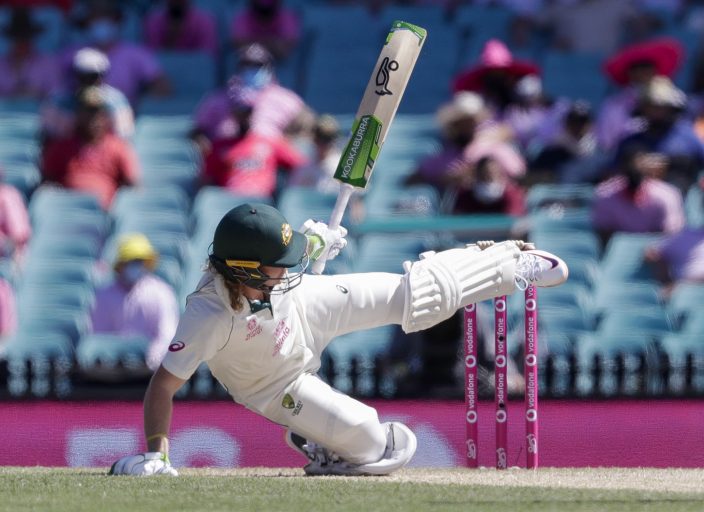 Australia's Will Pucovski falls while batting during play on day three of the third cricket test between India and Australia at the Sydney Cricket Ground, Sydney, Australia, Saturday, Jan. 9, 2021. (AP PhotoRick Rycroft)

Harris hasn't played a test match since the 2019 Ashes series but has been traveling with the Australian squad throughout the four-test series with India, having to wait for his recall while openers Pucovksi, Warner and Joe Burns were all given starts and Matthew Wade filled in as a make-shift opener for the first two matches.

Pucovski hurt his shoulder on Monday and didn't bat in the nets at the Gabba on Wednesday or Thursday.

“He tried to train this morning, didn’t quite come up,” Australia captain Tim Paine said in his pre-match news conference. “He’ll have a bit of work to do with our medicos to see where he goes from here.

Australia's Will Pucovski walks from the field after he was dismissed during play on day three of the third cricket test between India and Australia at the Sydney Cricket Ground, Sydney, Australia, Saturday, Jan. 9, 2021. (AP PhotoRick Rycroft)

“Marcus Harris will come in, open the batting and we’re looking forward to seeing what he can do.”

Warner, who missed the first two matches of the series because of a groin strain, batted for an hour in the nets on the eve of the match and was declared ready.

India will be forced into changes to its starting XI, with Ravi Jadeja undergoing surgery on his thumb after the third test and other players, including pace spearhead Jasprit Bumrah, struggling to recover from injuries.

Injuries force 4 changes for India in 4th test vs Australia