Former presidential candidate Andrew Yang officially entered the race for mayor of New York City on Thursday, joining a crowded Democratic primary field that includes longtime elected officials and veterans of the administration of Mayor Bill de Blasio, who is barred by the city charter from seeking a third term.

“It is here in New York City that my passion for uplifting people, for wanting to move our country forward, got started,” Yang said at a campaign launch that was streamed on YouTube because of the coronavirus pandemic. “And now that we are facing this historic crisis I am aiming to unleash and channel that energy for a human-centered economy right here in New York, my home!"

Yang’s proposal for a universal basic income won him a national following during the 2020 Democratic primary campaign before he dropped out of the race in February. He brings high name recognition to the mayoral race but has no record of involvement in local politics.

More than two dozen people have filed with the city's Campaign Finance Board to run in the June 22 Democratic mayoral primary, which for the first time in city history will be determined by ranked choice voting, a system that lets voters rank candidates in order of preference.

Yang has lived in New York City since attending law school at Columbia University in the 1990s but has spent much of the coronavirus pandemic at his family’s weekend home about 85 miles (136 kilometers) north of the city in New Paltz, New York. 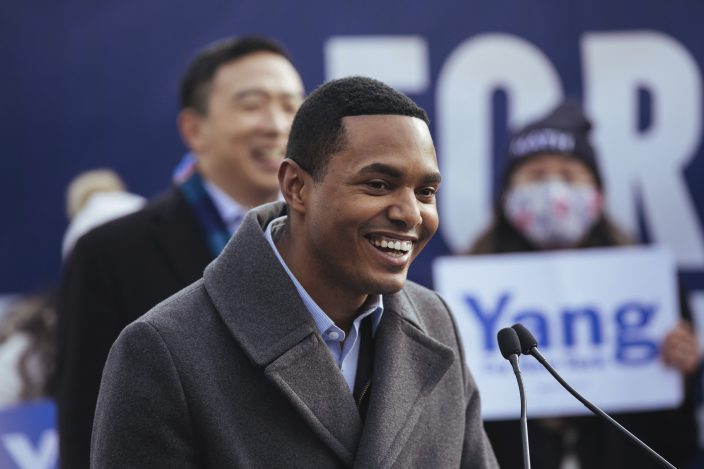 Critics pounced when Yang explained his absence from the city by asking a New York Times reporter, “Can you imagine trying to have two kids on virtual school in a two-bedroom apartment, and then trying to do work yourself?” Fellow mayoral candidate Dianne Morales, a former nonprofit executive, tweeted: “I spent all of 2020 in NYC, living with THREE generations under one roof, AND running a campaign from home.”

Wherever the candidates are physically located, the mayoral campaign has so far been conducted largely via Zoom and other online platforms because of the pandemic.

The winner of the Democratic primary will be the strong favorite in the November general election because Democrats outnumber Republicans in the city by a wide margin. Republicans who have said they are considering running include Guardian Angels founder Curtis Sliwa. 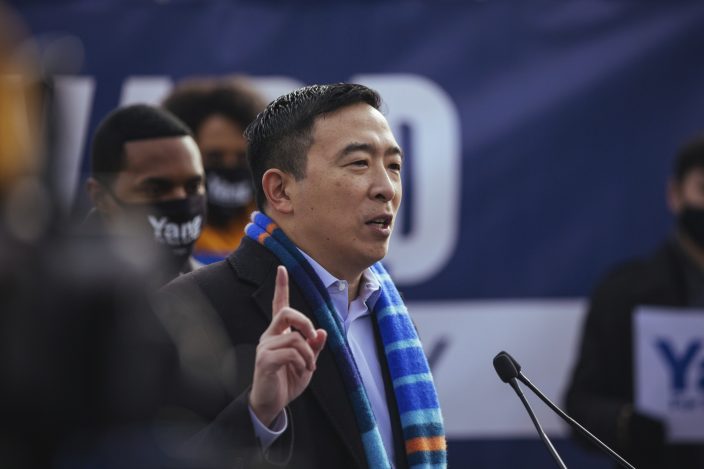 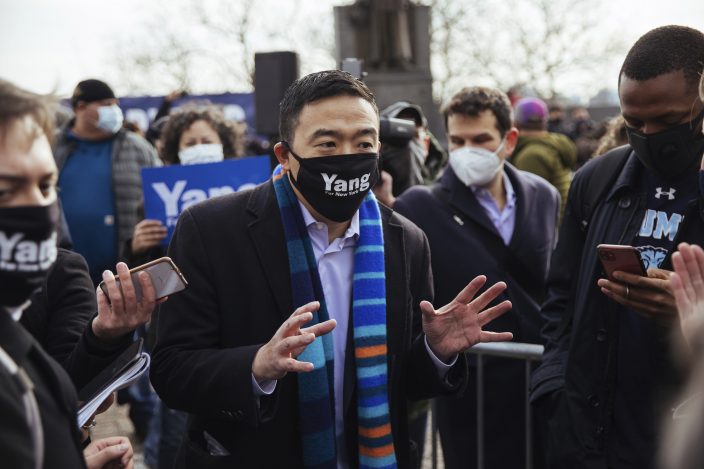 Andrew Yang takes questions from the press after he announced his run for New York City Mayor during a press conference in Morningside Park on Thursday, Jan. 14, 2021, in New York. (AP PhotoKevin Hagen)