The fighting near the provincial capital of Faroz Koh also killed one officer and wounded another, according to a statement by the National Directorate for Security.

It accused the council member, Hazatullah Beg, of masterminding the killing of another council member as well as an Afghan journalist and human rights activist in Ghor. 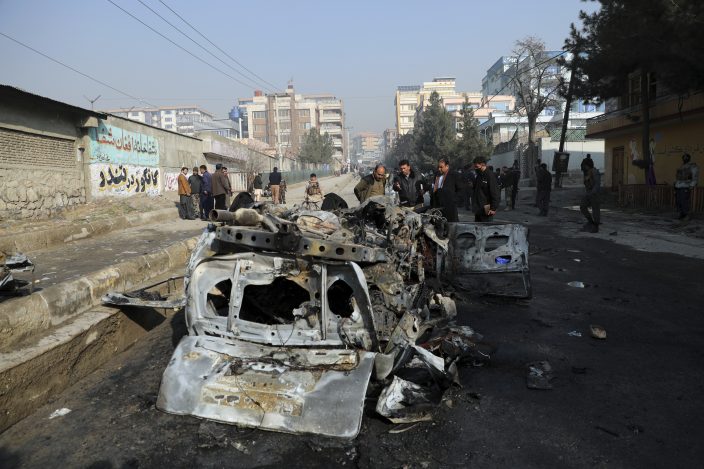 Afghan security officers inspect the site of a bomb attack in Kabul, Afghanistan, Sunday, Jan. 10, 2021. A roadside bomb exploded in Afghanistan's capital Sunday, killing at least a few people in a vehicle, the latest attack to take place even as government negotiators are in Qatar to resume peace talks with the Taliban. (AP PhotoRahmat Gul)

It wasn’t immediately clear when the gunbattle between Beg and his men on one side and the Afghan agents on the other took place. Beg was asked to surrender during the fighting but refused, the agency said, adding that he had links to the Taliban in the province.

Afghan journalist and activist Bismillah Adil Aimaq was shot and killed on Jan. 1 in Ghor. He was on the road, returning home to Feroz Koh from visiting family in a nearby village when gunmen opened fire at his car. Aimaq was the fifth journalist to be killed in the war-ravaged country in the past two months. The Taliban insisted they were in no way connected with the shooting.

Ghor deputy council chief Abdul Rahman Atshan was killed in mid-December in an attack in the province that also wounded another council member and their driver when a sticky bomb was attached to their vehicle. No one claimed responsibility for the attack.

The violence comes as the Taliban and Afghan government negotiators earlier this month resumed peace talks in Qatar. However, the negotiations were off to a slow start as the insurgents continue to keep up their attacks on Afghan government forces while keeping their promise not to attack U.S. and NATO troops.

The stop-and-go talks are aimed at ending decades of relentless conflict. Frustration and fear have grown over the recent spike in violence and both sides blame one another.

There has also been growing doubt lately over a U.S.-Taliban deal brokered by outgoing President Donald Trump’s administration. That accord was signed last February. Under the deal, an accelerated withdrawal of U.S. troops ordered by Trump means that just 2,500 American soldiers will still be in Afghanistan when President-elect Joe Biden takes office on Jan. 20.

There was one difference during ye ...

Rockets hit US base in Afghanistan, no casualties reported