House Speaker Nancy Pelosi has tapped nine of her most trusted allies in the House to argue the case for President Donald Trump’s impeachment.

The Democrats, all of whom are lawyers and many of whom have deep experience investigating the president, face the arduous task of convincing skeptical Senate Republicans to convict Trump.

A single article of impeachment — for “incitement of insurrection” — was approved by the House on Wednesday, one week after a violent mob of Trump supporters invaded the Capitol. At the time, lawmakers were counting the votes that cemented Trump’s election defeat. 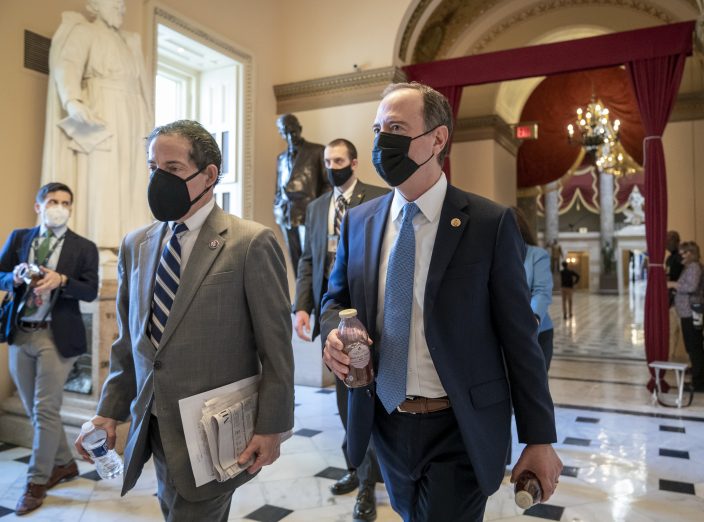 Impeachment manager Rep. Jamie Raskin, D-Md., left, and House Intelligence Committee Chairman Adam Schiff, D-Calif., right, walk to the House chamber for debate on the impeachment of President Donald Trump, at the Capitol in Washington, Wednesday, Jan. 13, 2021. The House of Representatives is pursuing an article of impeachment against Trump for his role in inciting an angry mob to storm the Capitol last week. (AP PhotoJ. Scott Applewhite)

As members of the House who were in the Capitol when it was attacked — several hiding under seats as rioters beat on the doors of the chamber — the Democrats are also witnesses to what they charge is a crime. So are the Senate jurors.

“This is a case where the jurors were also victims, and so whether it was those who voted in the House last night or those in the Senate who will have to weigh in on this, you don’t have to tell anyone who was in the building twice what it was like to be terrorized,” said California Rep. Eric Swalwell, one of the managers.

It is unclear when the trial will start. Pelosi hasn’t yet said when she will send the article of impeachment to the Senate. It could be as soon as next week, on President-elect Joe Biden’s first day in office.

The managers plan to argue at trial that Trump incited the riot, delaying the congressional certification of the electoral vote count by inciting an angry mob to harm members of Congress. Some of the rioters were recorded saying they wanted to find Pelosi and Vice President Mike Pence, who presided over the count. Others had zip ties that could be used as handcuffs hanging on their clothes.

“The American people witnessed that,” said Rep. Madeleine Dean, D-Pa., one of the managers. “That amounts to high crimes and misdemeanors.”

None of the impeachment managers argued the case in Trump’s first impeachment trial last year, when the Senate acquitted the president on charges of abuse of power and obstruction of justice. The House impeached Trump in 2019 after he pressured Ukraine’s president to investigate Biden’s family while withholding military aid to the country.

Colorado Rep. Diana DeGette, another manager, says the nine prosecutors plan to present a serious case and “finish the job” that the House started.

Pelosi appointed Raskin, a former constitutional law professor and prominent member of the House Judiciary Committee, as lead manager. In a week of dramatic events and stories, Raskin’s stands out — the day before the Capitol riots, Raskin buried his 25-year-old son, Tommy, after he killed himself on New Year’s Eve.

“You would be hard pressed to find a more beloved figure in the Congress” than Raskin, says House Intelligence Committee Chairman Adam Schiff, who was the lead manager during Trump’s first trial. He worked closely with Raskin on that impeachment investigation. “I know that part of what gives him strength to take on this burden that he now carries is knowing that this is something that would be enormously meaningful to his son.”

DeGette, who is serving her 13th term, is a former civil rights attorney and one of Pelosi’s go-to allies. The speaker picked her to preside over the House during the first impeachment vote in 2019. DeGette said Pelosi trusted her to do it because she is “able to to control the passions on the floor.”

She says she was surprised when Pelosi called to offer her the prosecutorial position but quickly accepted. “The monstrosity of this offense is not lost on anybody,” she says.

Cicilline, the former mayor of Providence and public defender, is in his sixth term in Congress and is a senior member of the Judiciary panel.

He was heavily involved in Trump’s first impeachment and was one of three original authors of the article that the House approved on Wednesday. He and California Rep. Ted Lieu began writing the article together, in hiding, as the rioters were still ransacking the Capitol. He tweeted out a draft the next morning, writing that “I have prepared to remove the President from office following yesterday’s attack on the U.S. Capitol.”

Castro is a member of the House Intelligence and Foreign Affairs panels, where he has been an outspoken critic of Trump's handling of Russia. He was a litigator in private practice before he was elected to the Texas legislature and came to Congress, where he is in his fifth term.

Swalwell also serves on the Intelligence and Judiciary panels and was deeply involved in congressional probes of Trump’s Russian ties. A former prosecutor, he briefly ran for president last year.

“The case that I think resonates the most with the American people and hopefully the Senate is that our American president incited our fellow citizens to attack our Capitol on a day where we were counting electoral votes, and that this was not a spontaneous call to action by the president at the rally,” Swalwell said.

Lieu, who authored the article of impeachment with Cicilline and Raskin, is also on the Judiciary and Foreign Affairs panels.

The Los Angeles-area lawmaker is a former active duty officer in the U.S. Air Force and military prosecutor, which he says will help prepare him for arguing the Senate trial.

Because she represents a U.S. territory, not a state, Plaskett does not have voting rights and was not able to cast a vote for impeachment. But she will bring her experience as a former district attorney in New York and senior counsel at the Justice Department.

“Donald J. Trump has been and continues to be a clear and present danger to our republic, to our Constitution, and to the people of this nation,” she said in a statement. “I will do my duty and defend our blessed country.”

Neguse, in his second term, is a rising star in the Democratic caucus who was elected to Pelosi’s leadership team his freshman year in Congress. A former litigator, he sits on the House Judiciary Committee and consulted with Raskin, Cicilline and Lieu as they drafted the article the day of the attack. At 36, he will be the youngest impeachment manager in history, according to his office.

“This armed mob did not storm the Capitol on any given day, they did so during the most solemn of proceedings that the United States Congress is engaged in,” Neguse said Thursday. “Clearly the attack was done to stop us from finishing our work.”

Like Neguse, Dean was first elected when Democrats recaptured the House in 2018. She is also a member of the House Judiciary Committee, and is a former lawyer and member of the Pennsylvania House of Representatives.

She says she hopes the prosecutors can convince the Senate and the American people “to mark this moment" with a conviction.

“I think I bring to it just the simple fact that I’m a citizen, that I’m a mom and I’m a grandma," Dean said. "And I want my children, my grandchildren, to remember what we did here.”