The New York Jets were searching for a leader, someone who could bring a frustrated, playoff-starved franchise back to respectability.

They think they found their guy in Robert Saleh.

The Jets reached an agreement in principle with the popular and energetic San Francisco 49ers defensive coordinator Thursday night to hire him as their head coach. Saleh replaces Adam Gase, who was fired by on Jan. 3 after going 9-23 in two seasons. 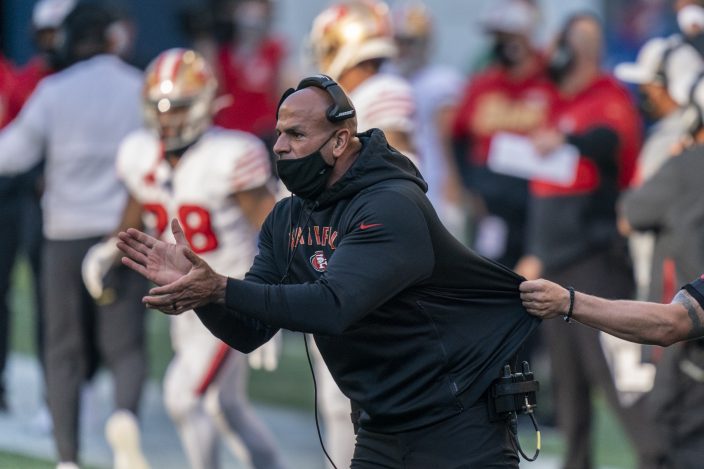 FILE - In this Nov. 1, 2020, file photo, San Francisco 49ers defensive coordinator Robert Saleh cheers on his team from the sideline during the first half of an NFL football game against the Seattle Seahawks in Seattle. One year ago, Saleh and Kansas City Chiefs offensive coordinator Eric Bieniemy missed out on the coaching carousel despite being coordinators of the two Super Bowl teams. The two figure to be near the top of many of the lists of possible head coaching candidates again this offseason when the NFL is hoping some new rules lead to more opportunities for minority coaches.(AP PhotoStephen Brashear, File)

The 41-year-old Saleh emerged as a favorite for the Jets job when he was brought in for a second -- and this time, in-person -- interview Tuesday night, and those discussions extended into Wednesday. He was the first of the nine known candidates New York interviewed remotely to meet with chairman and CEO Christopher Johnson, team president Hymie Elhai and general manager Joe Douglas at its facility in Florham Park, New Jersey.

Saleh left the Jets and met with Philadelphia, which fired Doug Pederson on Monday. And New York also had an in-person meeting with Tennessee offensive coordinator Arthur Smith on Wednesday night and Thursday morning.

After Smith left without a deal, New York had internal discussions and opted to hire Saleh.

Saleh, recognized as an energetic leader who is well liked by his players, had been the 49ers’ defensive coordinator under Kyle Shanahan since 2017, overseeing San Francisco’s defense that ranked No. 2 overall on the way to the Super Bowl last season.

The 49ers ranked fifth in overall defense this season despite season-ending injuries to pass rushers Nick Bosa — the 2019 AP NFL Defensive Rookie of the Year — and Dee Ford, as well as defensive linemen Solomon Thomas and Ezekiel Ansah. While San Francisco missed the playoffs, Saleh’s work with a banged-up and short-handed defense made him a popular candidate among the teams looking for a coach.

Saleh, the son of Lebanese parents, is the the second minority coach to be hired by the Jets in the last six years and first since Todd Bowles, who is Black, in 2015. He’s the fourth active minority coach in the NFL, joining Miami’s Brian Flores, Washington’s Ron Rivera and Pittsburgh’s Mike Tomlin.

New York pounced, though, after Douglas promised the team would “cast a very wide net” in its search. Both Johnson and Douglas spoke about finding a leader, a CEO-type of coach who would oversee the entire operation of the team and help re-establish a culture and identity for the franchise.

Saleh is the seventh straight coach hired by the Jets to not have previous head coaching experience, with the last not fitting that category being Bill Parcells in 1997. He’s also the fifth former defensive coordinator to get the job among New York’s last six hires, with Gase the only exception.

With the Jets, Saleh will have plenty of work to do. New York hasn’t made the postseason since the 2010 season, the NFL’s longest active playoff drought with both Cleveland and Tampa Bay getting in this season.

Saleh and Douglas will also have lots of questions to answer about the roster, none bigger than what the Jets should do at quarterback.

Sam Darnold, the No. 3 overall pick in 2018, hasn’t lived up to his lofty draft status and regressed this season under Gase. New York currently holds the No. 2 pick in the draft and could opt to take a quarterback -- perhaps Ohio State’s Justin Fields or BYU’s Zach Wilson -- and start fresh at the position. A lot will depend on who Saleh brings in as his offensive coordinator, and how they view Darnold against the quarterbacks coming out in the draft.

The Jets also have 20 players scheduled to be unrestricted free agents, including several standouts on defense, with safety Marcus Maye, cornerback Brian Poole and linebackers Neville Hewitt and Tarell Basham among them.

Saleh began his coaching career in 2002 as a defensive assistant at Michigan State for two seasons, followed by stints at Central Michigan and Georgia. He joined the Houston Texans in 2005 as a defensive intern under Dom Capers and worked three seasons as a defensive quality control coach under Gary Kubiak before being promoted to assistant linebackers coach in 2009.

Saleh joined Pete Carroll’s staff in Seattle as a defensive quality control coach in 2011 before being hired by Gus Bradley in 2014 as Jacksonville’s linebackers coach. He spent three seasons with the Jaguars before joining the 49ers.