Colorado defenseman Ian Cole has taken a young kid under his wing as he starts his 11th season in the NHL, dining with him often and going the extra mile to make sure his needs are met.

Of course, this is Cole's infant son, who was born over the summer.

Someday, maybe Cole will serve again as a full-blown mentor for an NHL rookie. For now, in this COVID-19 climate, that's harder to do. 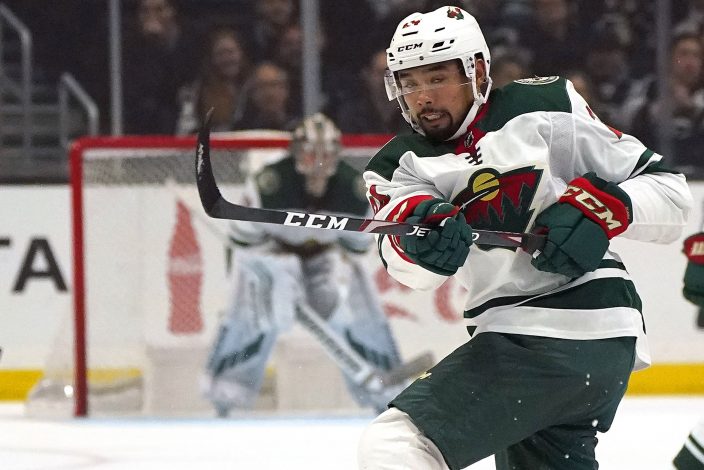 FILE - In this Saturday, March 7, 2020, file photo, Minnesota Wild defenseman Matt Dumba passes the puck during the first period of an NHL hockey game against the Los Angeles Kings in Los Angeles. Bonding between veterans and youngsters has been a time-honored tradition in hockey. But in yet another setback related to the relentless COVID-19, NHL protocols aiming to curb the virus spread and keep the schedule on track could make that vital off-ice development of camaraderie more difficult. (AP PhotoMark J. Terrill, File)

Bonding between veterans and youngsters has been a time-honored tradition in hockey, with older players routinely inviting rookies to live with them during their first season to help them get settled in. Building that kind of off-ice camaraderie is far more challenging now because of the pandemic.

“The directive that we’re getting is don’t hang out with anyone outside the rink. Don’t go to dinner. Don’t have dinner parties. Don’t do anything like that. Don’t see anybody,” Cole explained. “It's tough to build that chemistry away from the rink.”

Veterans across the league credit those unofficial rookie-year mentorships as instrumental in launching their careers. That was the case for Cole, who was guided by Barret Jackman while both were in St. Louis. Jackman was married with a family. Cole was young and living alone. Still, they built a strong relationship that translated into better on-ice performance. 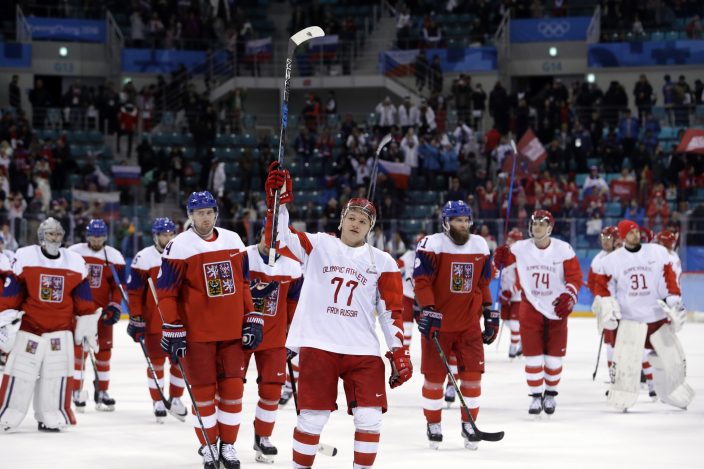 FILE - Russian athlete Kirill Kaprizov (77) celebrates after the semifinal round of the men's hockey game against the Czech Republic at the 2018 Winter Olympics in Gangneung, South Korea, in this Friday, Feb. 23, 2018, file photo. Olympic Athletes from Russia won 3-0. The Minnesota Wild, who have not won a playoff series in six years, seek to capitalize on the spark created by Russian rookie Kirill Kaprizov and lean on stalwarts like Zach Parise, Ryan Suter and Jared Spurgeon to make strides in this abbreviated season. (AP PhotoMatt Slocum, File)

“It’s not like we would hang out and go bar hopping by any means,” Cole said. “We built that chemistry at the rink and we were able to do it. I think that now may be more challenging but not impossible.”

The league rules are explicit and include: Avoiding close, social contact with non-family members; staying away from restaurants, bars, and clubs during road trips; and not eating meals with anyone outside the household.

The recent world junior championships provided Matt Dumba the perfect opportunity to reach out to rookie Kirill Kaprizov, his new teammate with the Minnesota Wild.

Kaprizov took some friendly razzing after he arrived at Dumba’s home as Canada beat Russia in the semifinals between their home countries, but the visit — as they tried to be as virus-safe as possible — served a greater purpose. Dumba recalled his early years when blue line partner Jordan Leopold was the one looking out for him.

“I’d be over at his house all the time chasing around the kids, having a good, home-cooked meal,” Dumba said. “To have that early in my career, guys who have my best interests in mind and just wanted to help me through it and just build my confidence, that’s how a team works.”

The St. Louis Blues brought their younger players to camp early for a head start on team-building in this unusual season. Like everyone, they're adapting. 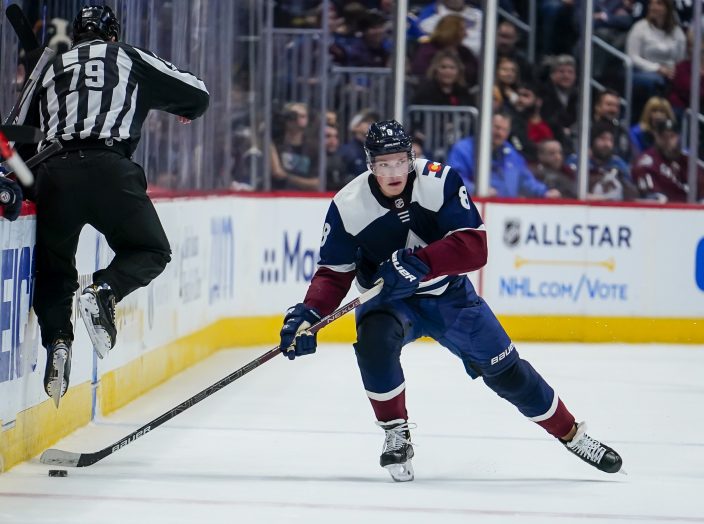 FILE - In this Thursday, Jan. 2, 2020, file photo Colorado Avalanche defenseman Cale Makar skates against the St. Louis Blues during the third period of an NHL hockey game in Denver. Bonding between veterans and youngsters has been a time-honored tradition in hockey, with older players routinely inviting rookies to live with them during their first season. That’s the way it was for Avalanche defenseman Cale Makar, who bunked with the family of teammate Matt Calvert when he first arrived before last season. This season, though, is just different. (AP PhotoJack Dempsey, File)

“You don’t get your normal situations where you’re checking out restaurants. You don’t do as many things together, but we still are doing our best,” Blues captain Ryan O'Reilly said.

Team building doesn't always have a veteran in the mix: Ottawa center Tim Stuetzle, the third pick in the 2020 draft and still a teenager, was invited to live not with a graybeard but with a pair of 21-year-old American teammates, Brady Tkachuk and Josh Norris.

“It’s a very nice way for them to ask me to live with them,” said Stuetzle, who is German. “It’s going to be much easier for me to get to know everybody really good.” 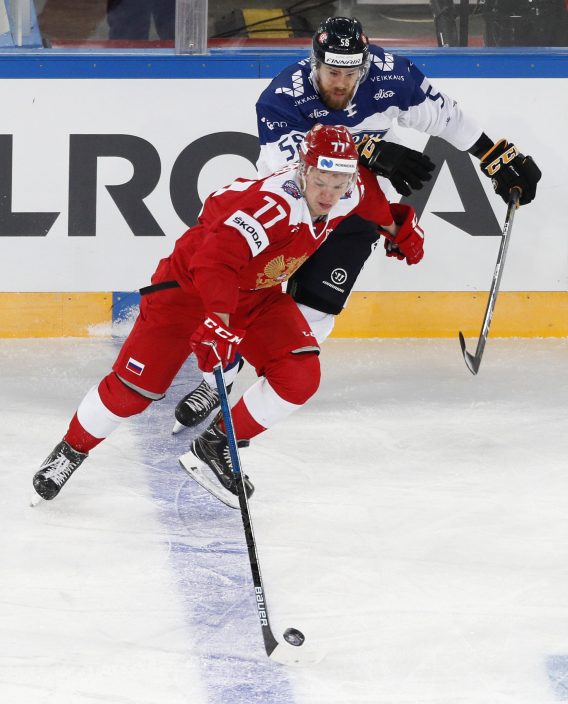 FILE - In this Sunday, Dec. 16, 2018, file photo, Russia's Kirill Kaprizov (77) battles Finland's Jani Hakanpaa (58) during the Channel One Cup ice hockey match in St. Petersburg, Russia. Bonding between veterans and youngsters has been a time-honored tradition in hockey. Older players routinely invite rookies to live with them during their first year. This season, NHL protocols aimed at curbing the spread of COVID-19 could make team-building more difficult. (AP PhotoDmitri Lovetsky, File)

That’s the way it was for Avalanche defenseman Cale Makar, who bunked with the family of teammate Matt Calvert when he first arrived during the '18-19 playoffs. Makar didn't have to worry about where to get a good meal or how to get to the practice rink.

“It definitely took some stressors off,” said Makar, the '19-20 Calder Trophy winner. “Calvy was amazing with it. It really helped me out.”

This season, though, is just different. Dinner parties are on hold. Movie excursions might not take place on the road. The best team-building opportunities might have to be through video games.

“On the ice, you spend time with them,” Avalanche captain Gabriel Landeskog said. “Away from the rink, it’s a lot different, just like the rest of the world.

"No doubt everyone has had to make adjustments in their every day life. Same thing with NHL rookies and bonding with NHL veterans. We’re finding ways and I’m sure once we get playing we’re going to see enough of each other at the rink."

This season will hardly be the usual introduction to the NHL for these rookies, but skill is skill and there will be plenty of impact made and highlights created.

First overall draft pick Alexis Lafreniere will slide right into the lineup for the New York Rangers. Stuetzle is expected to be an instant contributor for Ottawa. Kaprizov has made a strong first impression in Minnesota.

“Kirill is a good kid, man. He’s awesome," Dumba said. "I love his energy. He’s one of those guys that, even though there is a language barrier, he tries to fight through it and he doesn’t really care what kind of spews out. It’s nice to have a guy like that because then you can work with him.”

Kaprizov smiled as he spoke last week about the way the Wild have welcomed him.

“They’re very helpful," he said through his Russian interpreter. "Every time I got a question, even though they can’t fully communicate, whether I’m showing something on my hands or trying to explain something, they’re always finding a way to communicate and help me out, instead of just kind of sending me on my way."