López Obrador suggested that there could have been political motivations behind U.S. authorities' arrest of Cienfuegos at Los Angeles International Airport in October, noting that the investigation had been ongoing for years, but the arrest came shortly before U.S. presidential elections.

The president said that Mexican prosecutors had dropped the case because the evidence shared by the United States had no value to prove he committed any crime. 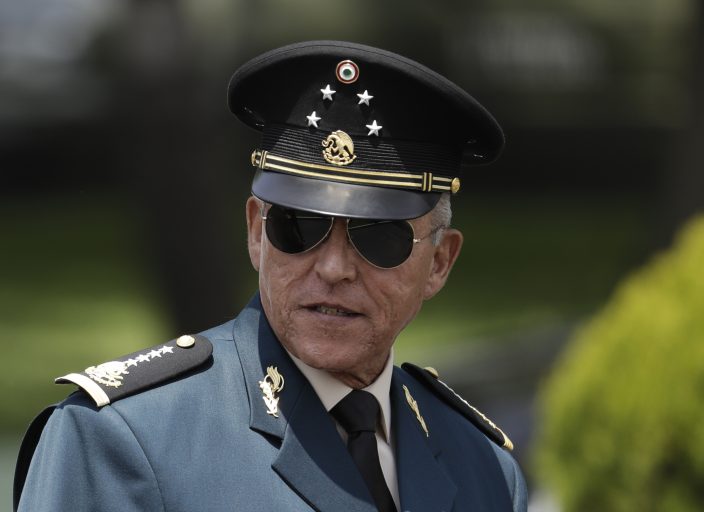 FILE - In this Sept. 14, 2016 file photo, Secretary of Defense Salvador Cienfuegos Zepeda arrives for a review of the troops that will participate in the Independence Day parade, in Mexico City. Mexican prosecutors on Thursday, Jan. 14, 2021, declared completely unfounded the U.S. case against Cienfuegos who was arrested on drug charges in the United States and then returned under pressure from the Mexican government. (AP PhotoRebecca Blackwell, File)

“Why did they do the investigation like that?” López Obrador said. “Without support, without proof?”

The president said the evidence shared by the U.S. against Cienfuegos would be made public, because the people should see and it had been a strike against Mexico’s prestige.

In a statement Thursday night, Mexico’s Attorney General’s Office went beyond just announcing they were closing the case. Its statement cleared the general entirely.

“The conclusion was reached that General Salvador Cienfuegos Zepeda never had any meeting with the criminal organization investigated by American authorities, and that he also never had any communication with them, nor did he carry out acts to protect or help those individuals,” the office said in a statement.

It said Cienfuegos had not been found to have any illicit or abnormal income, nor was any evidence found “that he had issued any order to favor the criminal group in question.”

A seven-year investigation by the U.S. authorities was completely disproved by Cienfuegos within five days of having the U.S. evidence shown to him, the statement said.

All charges were dropped and Cienfuegos, who was never placed under arrest after he was returned by U.S. officials, is no longer under investigation.

Gladys McCormick, an associate professor in history at Syracuse University’s Maxwell School of Citizenship and Public Affairs, said the only surprise was that Mexico didn’t make a better show of looking into Cienfuegos.

“One would think that they would have at least followed through on some semblance of an investigation, even if it was just to put some window dressing on the illusion that the rule of law exists,” McCormick said. “From the Mexican side, this signals the deep-seated control the military as an institution has on power. It also shows that the level of complicity at play in this case.”

López Obrador has given the military more responsibility and power than any president in recent history, relying on them to build massive infrastructure projects and most recently to distribute the COVID-19 vaccine, in addition to their expanded security responsibilities.

Cienfuegos was arrested in Los Angeles in October, after he was secretly indicted by a federal grand jury in New York in 2019. He was accused of conspiring with the H-2 cartel in Mexico to smuggle thousands of kilos of cocaine, heroin, methamphetamine and marijuana while he was defense secretary from 2012 to 2018.

Prosecutors said intercepted messages showed that Cienfuegos accepted bribes in exchange for ensuring the military did not take action against the cartel and that operations were initiated against its rivals. He was also accused of introducing cartel leaders to other corrupt Mexican officials.

Under the pressure of Mexico’s implicit threats to restrict or expel U.S. agents, U.S. prosecutors dropped their case so Cienfuegos could be returned to Mexico and investigated under Mexican law.

Acting U.S. Attorney Seth DuCharme told a judge at the time, “The United States determined that the broader interest in maintaining that relationship in a cooperative way outweighed the department’s interest and the public’s interest in pursuing this particular case.”

Even though the U.S. yielded on Cienfuegos, Mexico’s Congress a few weeks later passed a law that will restrict U.S. agents in Mexico and remove their diplomatic immunity.

Mike Vigil, the Drug Enforcement Administration’s former chief of international operations, said clearing Cienfuegos “could be the straw that broke the camel’s back as far as U.S.-Mexico cooperation in counter-drug activities.”

“It was preordained that Mexican justice would not move forward with prosecuting General Cienfuegos,” Vigil said. “It will greatly stain the integrity of its judicial system and despite the political rhetoric of wanting to eliminate corruption, such is obviously not the case. The rule of law has been significantly violated.”

Mexico clears general, publishes US evidence against him

Mexico clears ex-defense secretary of all US accusations

Mexico charges ex-security chief who faces trial in US

Mexican president: US should probe its ties to ex top cop