Aaron Donald, the unanimous All-Pro defensive tackle who owns a couple of Defensive Player of the Year awards, certainly hopes to meet fellow All-Pro Aaron Rodgers on Saturday — in the Packers' backfield. Donald hopes to put the star quarterback on the ground a few times, too.

Same for when Green Bay running back Aaron Jones comes in the vicinity of the Los Angeles Rams' dynamic D-lineman. 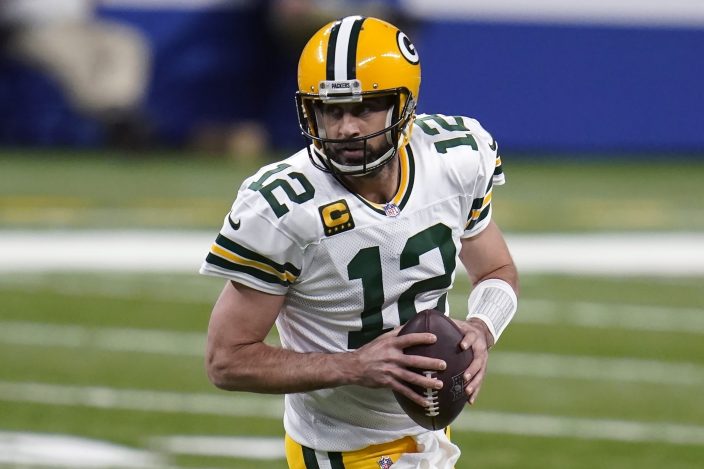 For the Rams to have a strong chance of advancing to the NFC championship game, they need Donald and the top-rated defense he anchors to, well, sink the Pack.

“He’s a special, special player,” Rodgers says. “Obviously a first-ballot Hall of Famer. Impact player every single year, a guy that you have to game-plan for, have to be aware of where he’s at at all times, and just one of those special talents that we haven’t seen a whole lot of in this game in the history of the game. A lot of credit to him, the way he takes care of himself, his motor and he’s somebody that you gotta be worried about.”

Naturally, the Rams should be worried about Rodgers and a four-pronged offense featuring the versatile Jones, All-Pro receiver Davante Adams in the midst of a career season, and breakout tight end Robert Tonyan. The LA offense also hasn't been special. Jared Goff will start at quarterback with John Wolford inactive one week after incurring a neck injury against Seattle. 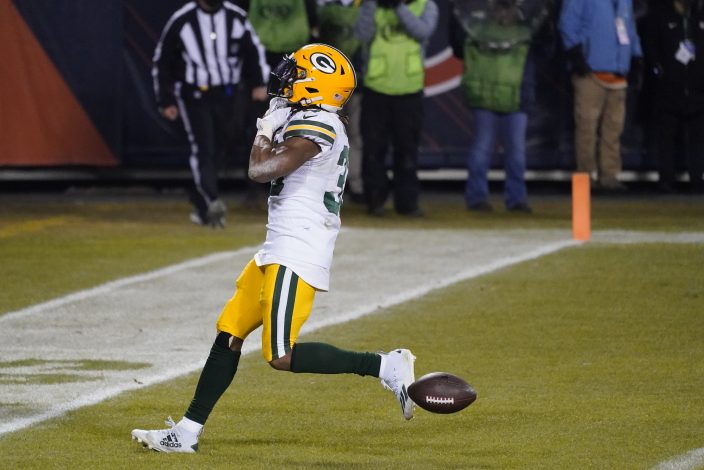 Green Bay Packers' Aaron Jones reacts after running for a touchdown during the second half of an NFL football game against the Chicago Bears Sunday, Jan. 3, 2021, in Chicago. (AP PhotoNam Y. Huh)

Los Angeles is a 7 1-2-point underdog at Green Bay. With about 6,500 fans in attendance, the home-field advantage will be less than it is normally, but frigid Lambeau for a team from SoCal? It will be close, but ...

KNOCKOUT POOL: For those with all options open, go with KANSAS CITY. But don't expect a rout.

John Harbaugh has a pretty amazing NFL record: eight road playoff victories. He snapped a tie with Hall of Famer Tom Landry and Tom Coughlin when the Ravens won at Tennessee.

This is a much bigger challenge. Buffalo has won seven straight, has a far better defense than the Titans, and a more dangerous passing attack. The Bills' win against Indianapolis was tight, but also had to be a huge confidence boost for a franchise that last advanced in the playoffs in 1995.

Of course, the performance by Lamar Jackson in his first postseason win after two defeats, and Baltimore's defense shutting down 2,000-yard rusher Derrick Henry, bodes well for the Ravens.

Just not quite well enough.

Cleveland (plus 10) at Kansas City, Sunday

Another team with a swell of confidence has to be the Browns. That they mauled the self-destructing Steelers should be taken into account, but that offense was impressive, and the defense was a takeaway machine.

One trouble for Cleveland is that the D showed some real vulnerability after building the big lead at Pittsburgh. Sure, the Browns were able to get conservative, but don't try that against Patrick Mahomes and the reigning champions.

KC has been idle since the regular-season finale, when several important regulars were rested. So rustiness is a consideration. Losing probably isn't, but this spread is too wide.

Old-timers day at the Superdome. Tom Brady and Drew Brees are a collective 85 years old. They also are headed to Canton five years after they retire — if they ever do — and will take lots of records with them.

The Saints won both meetings between these NFC South rivals during the regular season. The team that swept the regular-season series has won 14 of the previous 22 matchups. And New Orleans was the previous team in such a situation, achieving the sweep by beating Carolina 31-26 in the wild-card round after sweeping the Panthers in the 2017 regular season.

We don't have to pick an upset, but we're not going against TB12.