When a former Michigan public health director was charged with involuntary manslaughter in the Flint water crisis, the man who previously held the job says a chilling thought crossed his mind: It could have been me.

“I spent 14 years in that chair,” said Jim Haveman, who served under two Republican governors — including Rick Snyder, another target of indictments released Thursday. “I dealt with anthrax outbreaks, measles, hepatitis, Legionella. ... The list is a mile long. We had to make tough decisions all the time.”

He contends Snyder, former health chief Nick Lyon and seven others charged with various counts in one of the worst human-made environmental disasters in U.S. history are victims of Monday-morning quarterbacking that makes criminals of government officials guilty of nothing worse than honest mistakes. Prosecutors, however, say this is no ordinary matter of well-meant decisions that backfired. 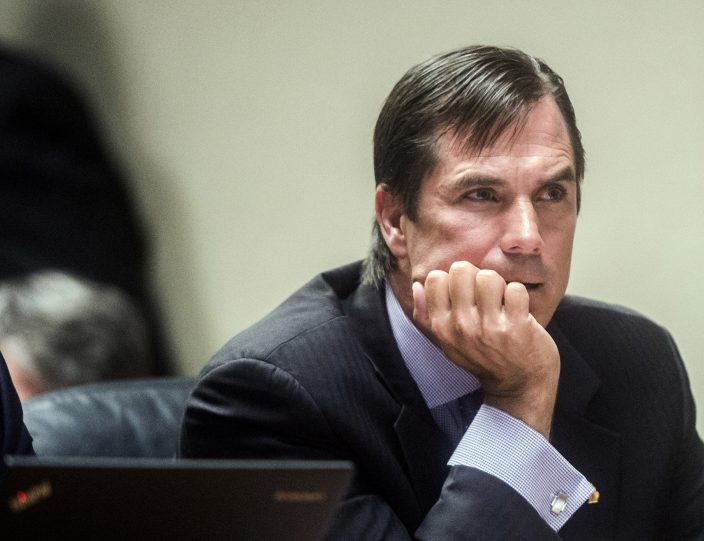 FILE - In this Aug. 20, 2018, file photo, Nick Lyon, former director of the Michigan Department of Health and Human Services, is seen in Flint, Mich. Lyon was charged Thursday, Jan. 14, 2021 with involuntary manslaughter in the deaths of nine people who got Legionnaires’ disease in the Flint water crisis. Nick Lyon pleaded not guilty during a video appearance before a Genesee County court. Lyon also was charged with a count of willful neglect of duty. He worked for then-Gov. Rick Snyder (Jake MayThe Flint Journal via AP, File)

“Pure and simple, this case is about justice, truth, accountability, poisoned children, lost lives, shattered families that are still not whole, and simply giving a damn about all of humanity," said Kym Worthy, a leader of the team that investigated a catastrophe that has been described as an example of environmental injustice and racism.

Few would dispute that a tangle of miscalculations, neglect and hubris led to pollution of the impoverished, majority-Black city's drinking water with lead. Some experts believe it contributed to a fatal outbreak of Legionnaires’ disease. But the charges have escalated a debate over whether state and local officials crossed a line between incompetence and illegality.

Those who support prosecution say conviction and punishment of those most responsible are essential steps toward making the victims whole — even after a $641 million civil settlement reached last year — and deterring similar misconduct.

To opponents, the charges are vengeful overreach that could do more harm than good, discouraging talented people from working in government and making those already there excessively cautious — just as the COVID-19 pandemic highlights the need for boldness and creativity.

Underscoring the high stakes is the precedent-setting nature of the case.

Snyder is the first governor in Michigan's 184-year history charged with crimes involving job performance. Ron Sullivan, a Harvard Law School professor, said he knew of no such cases in other states.

Governors have been accused of taking bribes, violating campaign finance laws and personal misconduct. Sullivan helped prosecute a former Missouri governor on an invasion-of-privacy charge involving a sex scandal. But the Michigan matter, he said, is “odd” and he thinks the bar for a conviction will be high.

Snyder, who held office from 2011 through 2018, faces two counts of willful neglect of duty. The indictment says only that he failed to monitor the “performance, condition and administration” of his appointees and protect Flint’s nearly 100,000 residents despite knowing the threat.

The Rev. Ezra L. Tillman Jr., pastor at First Trinity Missionary Baptist Church in Flint, said it's disappointing that Snyder was charged only with misdemeanors.

Yet even those charges will be hard to prove, Sullivan said. Prosecutors will have to show intentional wrongdoing, not just sloppy management.

“Negligence, even gross negligence, is not enough," he said.

But Noah Hall, a Wayne State University environmental law professor who took part in a previous investigation of the case and saw evidence including emails between top officials, said: “These were not innocent mistakes.”

Flint was under the control of a Snyder-appointed emergency manager when it switched its water source from Detroit to the Flint River in 2014 to save money. Lead from aging pipes contaminated tap water because the city followed state regulators' advice not to apply anti-corrosive treatments.

Despite residents' complaints of rashes, hair loss and other ailments, Snyder's administration waited 18 months to acknowledge a problem — after a doctor reported elevated lead levels in children.

Lyon and ex-chief medical executive Dr. Eden Wells are charged with involuntary manslaughter in the 2015 deaths of nine people with Legionnaires’. Authorities said they failed to alert the public about a regional spike in the disease when the water system might have lacked enough chlorine to combat bacteria.

Counts against others include perjury, obstruction of justice and extortion.

Lyon and Wells were among those charged in the previous investigation, which Democratic Attorney General Dana Nessel's office disbanded in 2019. She appointed a new team that produced this week's indictments.

During the initial Flint probe, the Association of State and Territorial Health Officials — a nonprofit representing public health agencies — warned against “criminalizing our exercise of professional judgment.”

The community has a right to know about health threats, the group acknowledged in a court filing. But notifying the public too soon could lead to panic and rumors, it said, causing people to avoid places such as hospitals.

If the prosecution were successful, the group said, health officials "would face enormous pressure to shift their focus away from scientific analysis and toward reducing liability.”

Sullivan, the Harvard professor, agreed the case probably wouldn't produce many imitators. Prosecuting a governor or other high-ranking officials for what amounts to poor job performance — even if intentional — is an “extraordinarily aggressive” approach, he said.

“It just kind of underscores how serious the crisis was," said Hughes, adding that the charges are important to help heal a struggling city whose residents have been through so much.

“It was hard for me to imagine how the community was going to move forward, how they were going to be able to trust government again," she said.