Urban Meyer first started thinking about the NFL about a decade ago.

He was getting phone calls from team owners. He was intrigued by the notion of testing his coaching skills at football’s highest level. He was ready to make the jump.

But he put it off time and time again, waiting for a situation that “had to be perfect.” 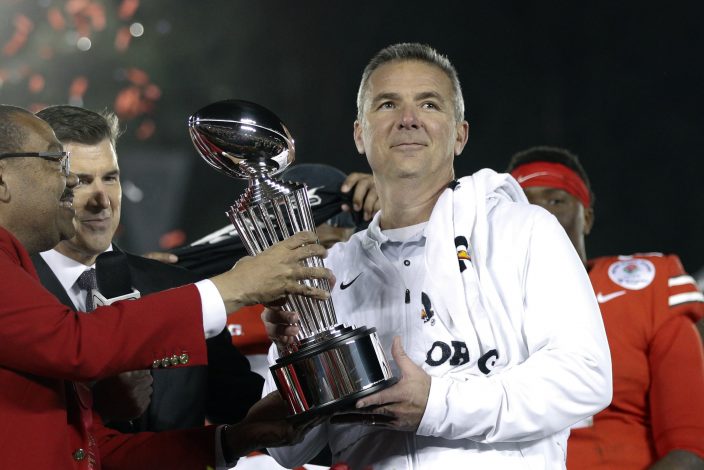 FILE - Ohio State coach Urban Meyer, right, holds the trophy after the team's 28-23 win over Washington in the Rose Bowl NCAA college football game in Pasadena, Calif., in a Tuesday, Jan. 1, 2019, file photo. A person familiar with the search says Urban Meyer and the Jacksonville Jaguars are working toward finalizing a deal to make him the team's next head coach. The person spoke to The Associated Press on the condition of anonymity Thursday, Jan. 14, 2021, because a formal agreement was not yet in place. (AP PhotoJae C. Hong, File)

He feels as if Jacksonville has everything he needs to make the move successful: an opportunity to land a franchise quarterback, a chance to mold the league’s youngest roster and the financial support to provide players with the “best of the best.”

The Jaguars formally and virtually introduced Meyer on Friday, with the three-time national championship-winning coach saying, “I believe this is the place.” 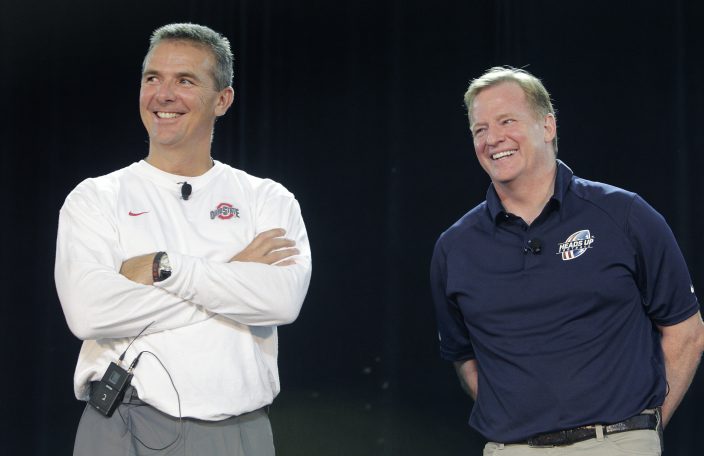 FILE - NFL Commissioner Roger Goodell, right, and Ohio State NCAA college football head coach Urban Meyer answer questions during a safety clinic for mothers of youth football players in Columbus, Ohio, in this Thursday, Aug. 1, 2013, file photo. A person familiar with the search says Urban Meyer and the Jacksonville Jaguars are working toward finalizing a deal to make him the team's next head coach. The person spoke to The Associated Press on the condition of anonymity Thursday, Jan. 14, 2021, because a formal agreement was not yet in place. (AP PhotoJay LaPrete, File)

Here’s a rundown of Meyer’s first news conference with Jacksonville:

— Meyer plans to monitor his health, which was instrumental in him walking away from Florida and Ohio State. He stepped down at Ohio State in 2018 mostly because of a congenital arachnoid cyst in his brain, which required surgery in 2014 and bothered him throughout his final season with the Buckeyes.

“I’m not going to be running around like a nut on the practice field,” he said. “Those days are gone. I know what it’s supposed to look like and I want to be very demanding of everyone. It’s something I’m going to watch very closely. ... I had that surgery in 2014 that really helped things. But it’s just something that I watch very closely.” 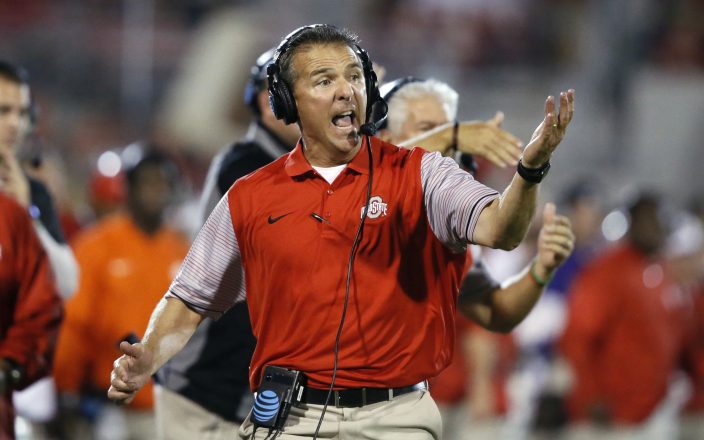 FILE - In this Sept. 17, 2016, file photo, Ohio State head coach Urban Meyer shouts from the sideline in the fourth quarter of an NCAA college football game against Oklahoma in Norman, Okla. A person familiar with the search says Urban Meyer and the Jacksonville Jaguars are working toward finalizing a deal to make him the team's next head coach. The person spoke to The Associated Press on the condition of anonymity Thursday, Jan. 14, 2021, because a formal agreement was not yet in place. (AP PhotoSue Ogrocki, File)

— Meyer insisted he won’t coach at the college level again. Not at Texas. Not at Notre Dame. Not anywhere, ever.

“The times are changing. College football is different now,” he said. “The days of coaching the way you did back when I was at Bowling Green or when I was an assistant coach, I mean, the whole country has changed. Everything has changed, so you have to adapt. Those who adapt have success and those who don’t, fail.”

— Meyer declined to say which quarterback he will draft with the No. 1 pick in April. He mentioned Clemson’s Trevor Lawrence, Ohio State’s Justin Fields and BYU’s Zach Wilson as options.

“Who we pick at that quarterback spot, that’s going to be one of the most important decisions I’ve made in my lifetime, along with the partnership of our owner and general manager. ... I see some elite quarterbacks out there right now.”

— Owner Shad Khan is switching to a coach-centric model that will mean Meyer could have as much input, or more, as the general manager.

“The head coach really has to lead the kind of players he wants, the kind of team we need to be,” said Khan, who added the next GM could be announced in the next week or so. “And the general manager, myself, we have to support that vision. Somehow, someway that had been lost, and the idea here is really more about transparency, collaboration, teamwork and accountability.”

— Meyer clearly has a vision to upgrade Jacksonville's football facilities. The Jaguars are one of the few NFL teams remaining that practice at their stadium. They don’t have traditional offices, much room to expand or any of the elaborate amenities others enjoy.

“People who work for me, with me, they all hear a statement of ‘It this the best of the best?’ And if it’s not, then the question is, ‘Well, why?’ That’s the same thing that I’m doing every time I walk through everywhere. We did that at Ohio State. We did that at Florida. ‘Is this the very best?’ And if it’s not, especially when you start talking about player welfare and safety and just the players, let’s have a chat and do what’s very best.

“I won’t do that,” he said. “Does that mean there might be one? Maybe. I’m not there yet. ... I’m not going to do that to that organization. And I’m not sure they would go. Ohio State is home to those guys now.”

With many vaccinated, Israel reopens economy before ele ...

Israel reopened most of its econom ...