Andre Drummond tied his career high with 33 points and grabbed 23 rebounds, and Cedi Osman scored 25 points in leading the Cleveland Cavaliers to a 106-103 win over the New York Knicks on Friday night.

Drummond posted the Cavaliers’ first 30-20 game since Carlos Boozer had 32 points and 20 rebounds against Seattle on Jan. 20, 2004. He also had three assists, two blocks and two steals as Cleveland snapped a three-game losing streak.

Julius Randle had 28 points and six assists, rookie Immanuel Quigley scored a season-high 23 points and R.J. Barrett had 20 points for New York, which lost its fifth straight. The Knicks used a 16-0 run spanning the third and fourth quarters to go in front 84-80. 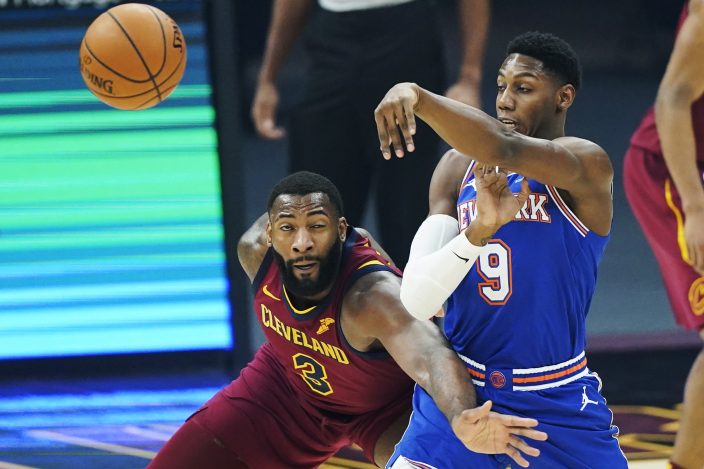 Osman and Drummond each made steals in the final 31 seconds, preventing New York from getting closer than three points at 102-99. Rookie Isaac Okoro sealed the win with two free throws, making it 105-101 with 7.3 seconds remaining.

Cleveland center Jarrett Allen and forward Taurean Prince — acquired from Brooklyn — were inactive because all players in the three-team deal involving James Harden on Thursday have not taken their physicals. 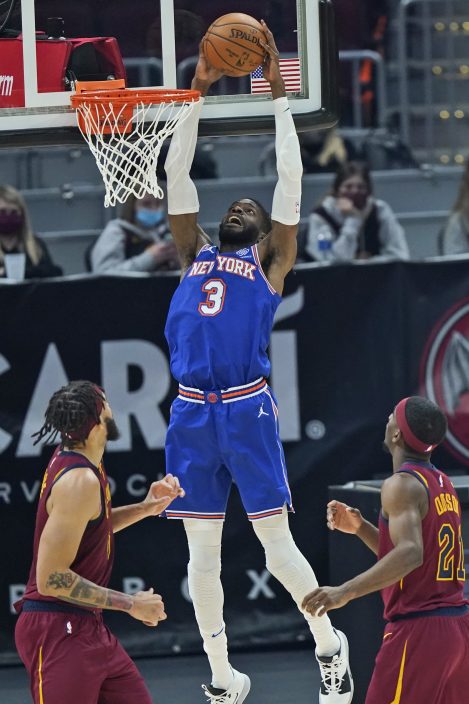 New York Knicks' Nerlens Noel (3) dunks against the Cleveland Cavaliers during the first half of an NBA basketball game Friday, Jan. 15, 2021, in Cleveland. (AP PhotoTony Dejak)

Cleveland took its largest lead at 80-68 with 3:15 left in the third on a basket by Larry Nance Jr. New York immediately answered with 16 straight points, capped by back-to-back buckets by Randle to go up four.

Drummond posted 20 points and 14 rebounds in the first half for the initial time in his nine-year career, helping Cleveland take a 57-55 lead into the break. 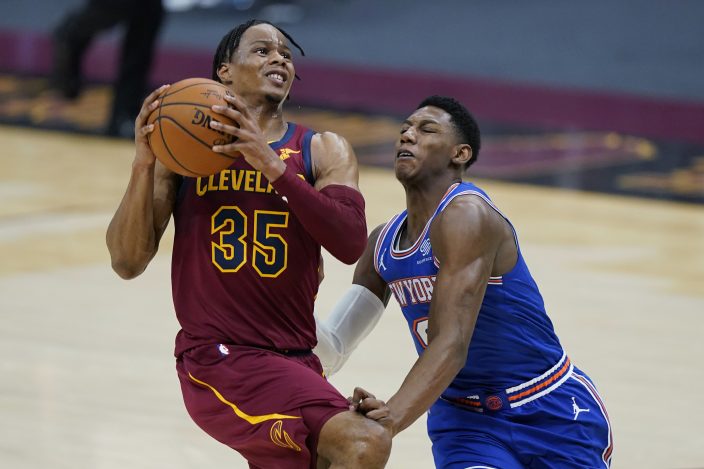 The Cavaliers’ next two games were postponed by the NBA because the Wizards do not have the minimum eight available players. Cleveland was slated to play in Washington on Sunday and Monday, which was already problematic because of heightened security in the nation’s capital. “The city of D.C. logistically would have been a nightmare,” coach J.B. Bickerstaff said. “When you add in the COVID factor, it’s definitely the right move not to play those games.” 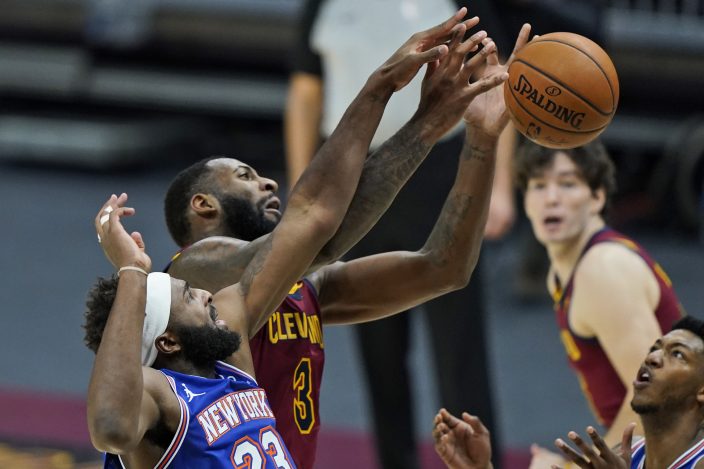 Knicks: G Frank Ntilikina (right knee sprain) missed his ninth straight game and will be “out a while longer,” according to coach Tom Thibodeau. Ntilikina was injured Dec. 29 in Cleveland. ... G Alec Burks (left ankle sprain), who last played Dec. 27 against Milwaukee, has been upgraded to day to day. Thibodeau said Burks has advanced to conditioning and is getting close to returning.

Cavaliers: F Kevin Porter Jr. (personal reasons) joined his teammates on the bench for the first time this season. The second-year pro remains in limbo after an offseason arrest in Eastern Ohio. ... Bickerstaff is excited to have Allen on his roster. “What excites me the most is Jarrett’s ability to impact the game at both ends of the floor without the ball in his hands,” the coach said. 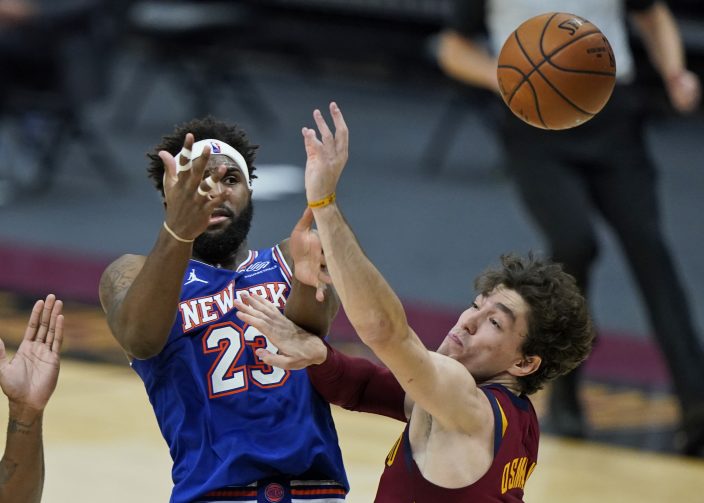 New York Knicks' Mitchell Robinson, left, loses control of the ball as he drives to the basket against Cleveland Cavaliers' Cedi Osman during the second half of an NBA basketball game Friday, Jan. 15, 2021, in Cleveland. Cleveland won 106-103. (AP PhotoTony Dejak)

Knicks: Visit Boston on Sunday. New York has lost five straight to the Celtics, including a 104-102 defeat at Madison Square Garden on Dec. 1.

Cavaliers: Host Brooklyn on Wednesday. The Nets will play back-to-back games at Rocket Mortgage FieldHouse on Jan. 20 and 22.