Less than 48 hours after the first planeload of players arrived for the delayed Australian Open on charter jets from around the world, the first tennis major of the year and often dubbed the “Happy Slam” by Roger Federer and others appeared to be anything but.

Two-time Australian Open champion Victoria Azarenka was reported by local media Saturday to be among a group of players set to be confined to their hotel rooms for the next 14 days after two positive coronavirus tests emerged from their charter flight from Los Angeles.

The Australian Open is set to start Feb. 8, three weeks later than usual because of COVID-19 quarantining protocols. 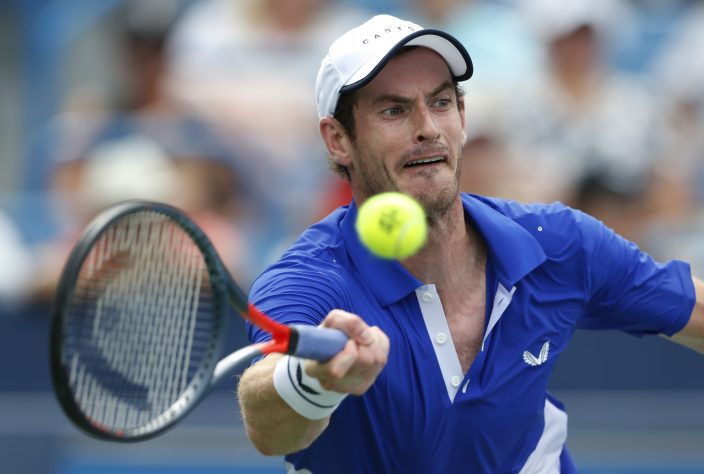 FILE - In this Monday, Aug. 12, 2019 file photo Andy Murray, of Britain, hits a forehand against Richard Gasquet, of France, during first-round play at the Western & Southern Open tennis tournament, in Mason, Ohio. Former world number one Murray's participation at the upcoming Australian Open is in doubt after the Briton tested positive for COVID-19. (AP PhotoGary Landers, File)

Melbourne's Herald Sun newspaper reported that an email was sent to all players and officials who were aboard the flight which stated they would no longer be able to leave their quarantine hotel to train. That would mean the only workouts they'd be able to have would be on an exercise bike left in the rooms of all of the players.

Other players will be allowed to train under strict conditions and with supervision for up to five hours a day.

The Herald Sun said the email from tennis officials told players who arrived on a flight from LAX that landed in Melbourne at 5:15 a.m. on Friday that health authorities had reported two positive COVID-19 PCR tests after arrival. 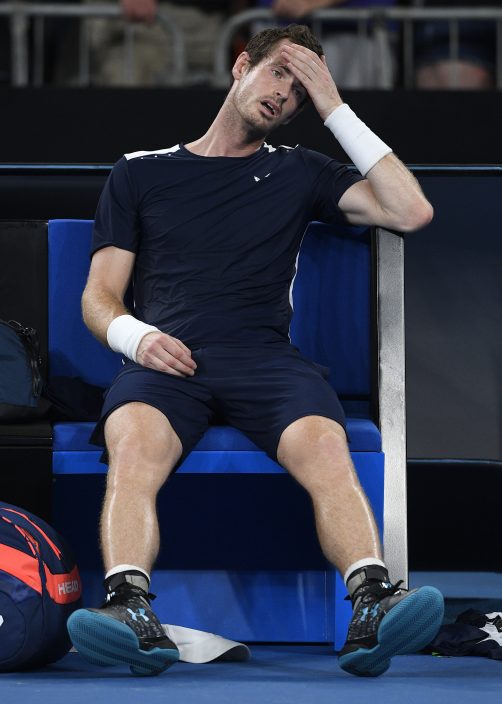 FILE - In this Monday, Jan. 14, 2019 file photo Britain's Andy Murray reacts after his first round loss to Spain's Roberto Bautista Agut at the Australian Open tennis championships in Melbourne, Australia. Former world number one Murray's participation at the upcoming Australian Open is in doubt after the Briton tested positive for COVID-19. (AP PhotoAndy Brownbill, File)

“The Chief Health Officer has reviewed the flight and has determined that everyone on board needs to isolate and will be confined to their rooms for the 14-day quarantine period," the email continued. "We know this is not how you imagined your preparations for the AO would start but our entire team is here to support and do everything we can to get you through this.”

Players and officials were supposed to have received a negative COVID-19 tests before they boarded their flights. The players who tested positive on arrival have not been publicly identified, and Tennis Australia has not commented.

There was also some early controversy when it was revealed that top 30-ranked player Dayana Yastremska of Ukraine, who was provisionally suspended for failing an out-of-competition doping test on Jan. 8, flew to Australia and was also among those players in quarantine.

The International Tennis Federation said 20-year-old Yastremska tested positive for mesterolone metabolite, a prohibited substance that can be used to boost testosterone.

However, the ITF on Friday said Yastremska still has the right to have her provisional suspension lifted, and that if it was, she would be able to compete at Melbourne Park. The only way that could occur is if Yastremska began her 14-day quarantine this week.

Azarenka, who won the tournament in 2012 and 2013, tweeted Friday: “Made it to Melbourne! Thank you everyone so much for making it happen. I can only imagine how many hours of work and compromise it took for us to be here! Thank you.”

She included what appeared to be a selfie next to a window with downtown city views. Azarenka has not tweeted again since.

The charters and the early arrivals are all part of Tennis Australia’s attempt to have the tournament happen despite a general ban on international arrivals into the country.

Australia has done a good job of containing the coronavirus, with 909 deaths nationally. Victoria state, which has as its capital Melbourne, accounted for 810 of those during a second wave three months ago which resulted in overnight curfews and lockdowns for the city.

Five-time finalist Andy Murray's status for the tournament was put in doubt after he tested positive for COVID-19 only days before his planned flight to Melbourne. The tournament says that the three-time Grand Slam champion, who was given a wild card for Melbourne, is isolating at home in Britain.

The 15 charter flights to Australia were restricted to 25% capacity, and arrived over a 36-hour period ending early Saturday.

The Australian Open draw will be held Feb. 4, four days ahead of the start of the main tournament, which ends Feb. 21 with the men’s singles final.

Novak Djokovic, Rafael Nadal and Serena Williams are among a group of players involved in an exhibition event in Adelaide, South Australia state, on Jan. 29. Those players flew straight to Adelaide to begin their hotel quarantine period.

One big-name player missing is 20-time Grand Slam singles champion Federer, who first coined the “Happy Slam" reference for the Australian Open. He said three weeks ago that he was not fit to play.

Members of the North Dakota House ...